Last week’s episode of 90 Day Fiance: The Other Way ended with a bombshell from Evelin Villegas as she revealed to her sisters (and millions of viewers) that she and Corey Rathgeber legally got married a year before. Tonight’s episode picked up where that one left off as Evelin explains to her sisters and producers why she and Corey decided to get married.

“I don’t think I was ready to marry Corey,” Evelin explains in an interview with a show producer. “But Corey’s visa was expiring, and we were in a good time of our relationship with no other way for him to stay here in the country with me, I agreed to marry him.”

The scene cuts to actual video of Corey and Evelin’s wedding ceremony, which looks to have taken place in a small office. The woman in the background is wearing a vest that reads “Registro Civil” on the front.

According to TLC, the date of the marriage was June 11, 2019. It doesn’t appear that Corey and Evelin have any friends or family with them, even though someone obviously agreed to record the ceremony.

The episode also featured a photo taken of Corey and Evelin as they sign the official marriage documents. In the foreground on the table are a pair of IDs — but they don’t appear to be Corey or Evelin. Perhaps they are witnesses? Here is the photo with the IDs zoomed in: 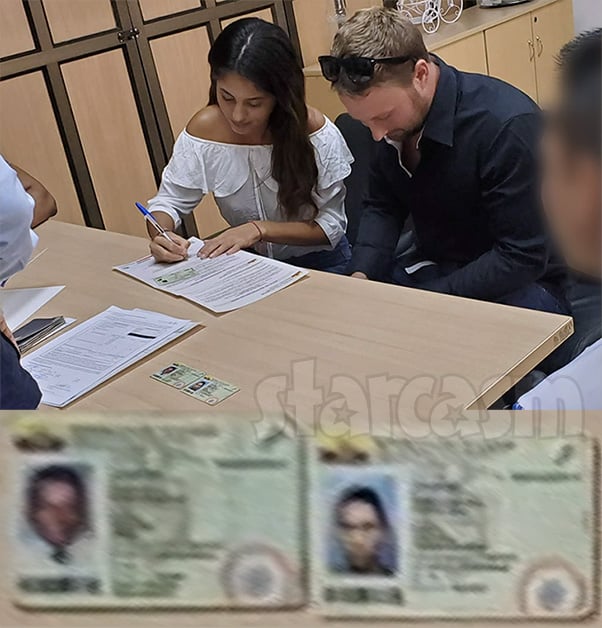 “It was mostly a last minute decision,” Evelin continues. “And after Corey and I got married, I got all these mixed emotions. Like, what did I do? Like, did I thought this through? And I just got really emotional and started crying.”

The scene shifts from Evelin talking to the producers and the camera to Evelin talking with her sisters in the dressmaker’s shop. “I did it thinking, ‘I’ve been with Corey this long. Yes, I see myself with Corey forever.’ So I said, ‘Let’s go get the papers.’ I though if anything went wrong, then we could divorce quietly and no one had to know.”

Evelin’s sisters are quite upset with Evelin — not only for marrying Corey, but for not telling them or their parents.

“I wasn’t ready for everyone to know because if it weren’t good, in secrecy we could get divorce,” Evelin explained to the producer. Evelin iterates the fact that her family doesn’t believe in divorce, so she didn’t want them to know until she was certain that they were going to stay together.

Evelin continued her explanation with her sisters. “But we got married and then I was like, ‘This relationship is not working out.’ And that’s when I told him, ‘Let’s give each other some space.’”

Evelin confirmed that she “asked for a break” in the relationship after she married Corey, but before he traveled to Peru and started hanging out with his “girlfriend” Jenny.

“And now you want to marry him again?!” Evelin’s sister asks incredulously.