Wedded bliss! Corey Rathgeber revealed the real reason he and Evelin Villegas tied the knot in 2019 but didn’t tell anyone until now.

“Here is the full and complete story of when and how me and Evelin got married!” Corey, 35, wrote via Instagram on Monday, September 20, after fans called the duo “fake” in their TV story line.

The 90 Day Fiancé: The Other Way star, who fans first met on season 1 of the spinoff show in fall 2019, confirmed that the couple have been secretly married since June of that year.

“We didn’t tell anyone because Evelin wasn’t ready for her family or anyone to know she had gotten married at that time. I respected her wishes. We decided to keep it a secret,” he explained, noting the ceremony happened in Guayaquil, Ecuador. “The production team was not made aware of this because we had just finished filming our first season. At the time we were not in talks with filming again. So we didn’t feel obligated to inform them. It was a very private and special moment for us!” 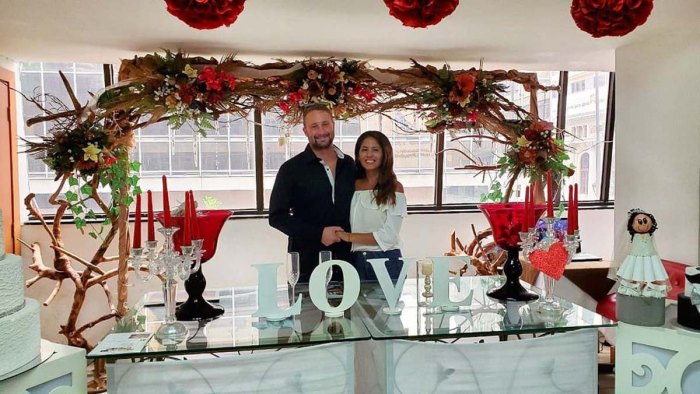 Corey recalled forgetting to get a witness for the nuptials, which led to the pair roaming the streets for “two random strangers to help us out.” In the end, they paid a couple $20 to witness the ceremony.

“The process only took a few hours and that was it. We were married! It was a very special and surreal moment shared only with the one I love,” the TV personality continued. “I am happy and so grateful. I will never forget that wonderful and crazy experience.”

The Washington native noted that when he and his wife, 32, told another TLC cast member, she spread the news to everyone and made it public against their wishes.

“She twisted our story into her own version and attempted to make us look like frauds. She tried so desperately to make us appear like we were lying to everyone,” he wrote. “The reality was that she just wanted to hurt us. It was very wrong and disappointing. I hope this clears up some of the rumors that are out there.”

Corey revealed that he thought they should have a “right to privacy,” which is why they didn’t share the story sooner with fans.

Corey and Evelin began dating in 2014 and got engaged on the season 1 finale of 90 Day Fiancé: The Other Way, which aired in October 2019. When they returned for season 3, however, Corey revealed he cheated on his then-fiancée with another woman.

The duo got over the cheating scandal and decided to walk down the aisle. As season 3 continues to air, fan speculation caused Evelin to set the record straight on her relationship and confirm their marriage. She insisted during an Instagram Q&A this month that the couple’s proposal was “completely real” and they are “not fake,” noting they aren’t acting.

Listen to Watch With Us to hear more about your favorite shows and for the latest TV news!