A bride’s uncle and her mom are taking over the bride’s dress fitting! In this EXCLUSIVE preview of the July 16 episode of Say Yes To The Dress season 20, the bride’s uncle picks out a Disney gown for his niece to try on.

MoreSay Yes To The Dress

A bride gets ‘frustrated’ over her mom and uncle. (TLC)

The bride admits that her uncle “can be very persuasive.” The consultant brings a gown into the room and tells the bride to not judge the dress by how it looks on the hanger. “Is anybody listening to me? This isn’t what I wanted,” the bride says.

‘Say Yes To The Dress’: Photos Of The Wedding Series

The bride decides to try on the huge ball gown first just to get it over with. “I just see all of this fabric. It’s for maybe a younger bride,” she says. “I’m 30 now so I kind of want something a little bit more mature and form-fitting.”

She walks out to her mom, who is paying for the dress, and uncle in the ball gown, which is a Disney by Allure gown that retails for $5,200. Her mom and uncle are in love with the dress. She is not.

‘Guardians Of The Galaxy 3’: The Cast, Release Date, & More 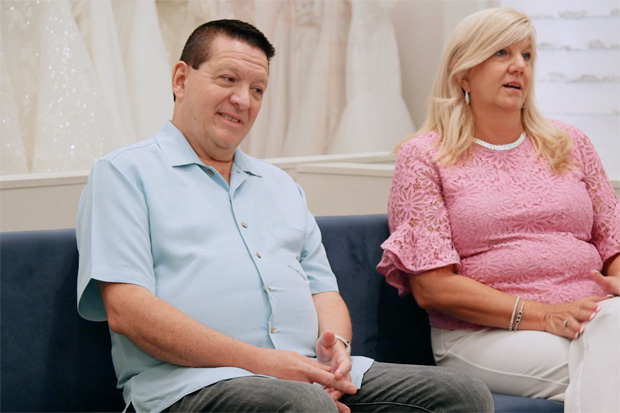 A mom and uncle think they know what’s best for the bride. (TLC)

“I’m kind of getting frustrated because it’s my wedding, and I’m the bride. Right now, I don’t feel like I’m being heard at all,” the bride admits. She tells her uncle that she can “hardly” walk in the dress.

The uncle thinks the dress should be a “wow factor.” The bride quips, “When I pass out during my ceremony, it’ll be a wow factor. It’s so hot.” The bride and her family are not seeing eye-to-eye on this wedding gown. They have differing ideas, even though it’s the bride’s special day. Say Yes To The Dress season 20 airs Saturdays at 8 p.m. on TLC.