An orchid fit for a queen has blossomed into the experience of a lifetime for an Illinois College professor.

After keeping the effort secret for about a year, Dr. Lawrence W. Zettler, an Illinois College biology professor and a leading expert in orchid conservation and recovery, is in London as part of a joint effort to honor Queen Elizabeth II with her own orchid as part of her Platinum Jubilee celebrations.

“We originally had the Ghost Orchid in mind,” Zettler said of the flower with which he’s closely associated through ongoing conservation research in South Florida and at IC. “But it’s hard to get and grow the Ghost Orchid, and we wanted something special for the Platinum Jubilee.” 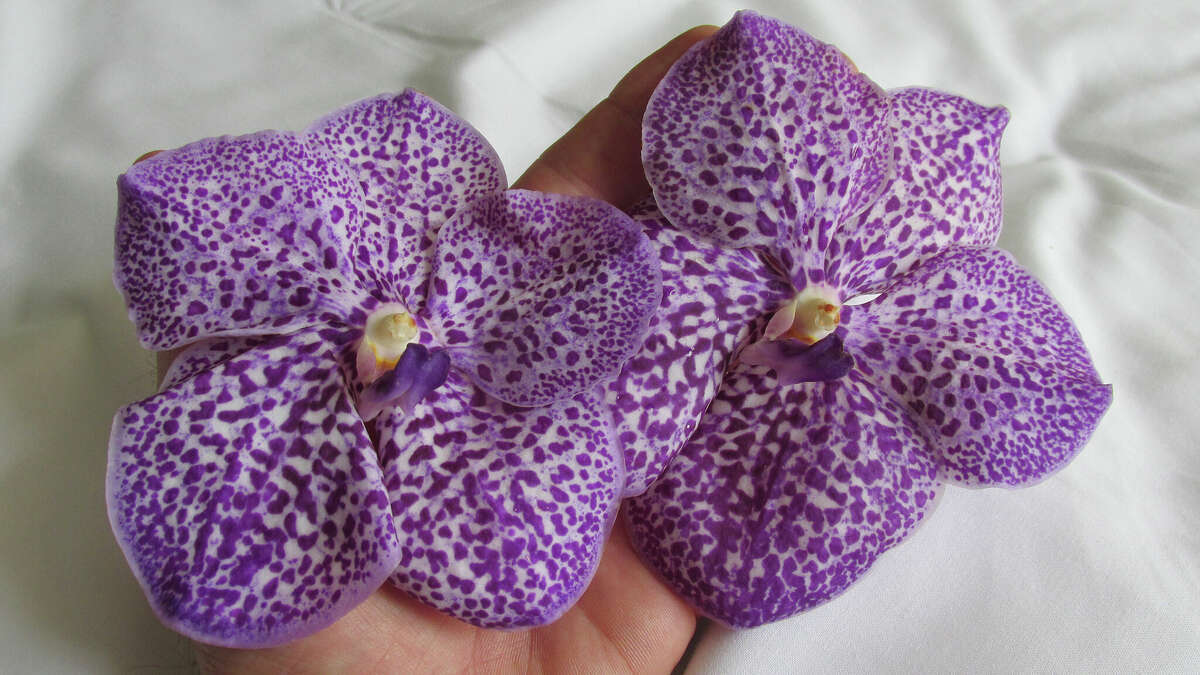 The Platinum Jubilee Orchid is a member of the vanda genus that produces a large bloom with an “intricate color pattern of light and dark purple patches,” according to Lawrence Zettler, who helped develop the orchid variety to honor Queen Elizabeth II’s 70 years on the British throne.

The queen marked 70 years on the British throne on Feb. 6, and the Platinum Jubilee — with the largest of its official events to come today through Sunday — celebrates her long reign.

Zettler first became involved with the effort to honor the queen at the request of friend and entrepreneur John Parke Wright IV of Naples, Florida. 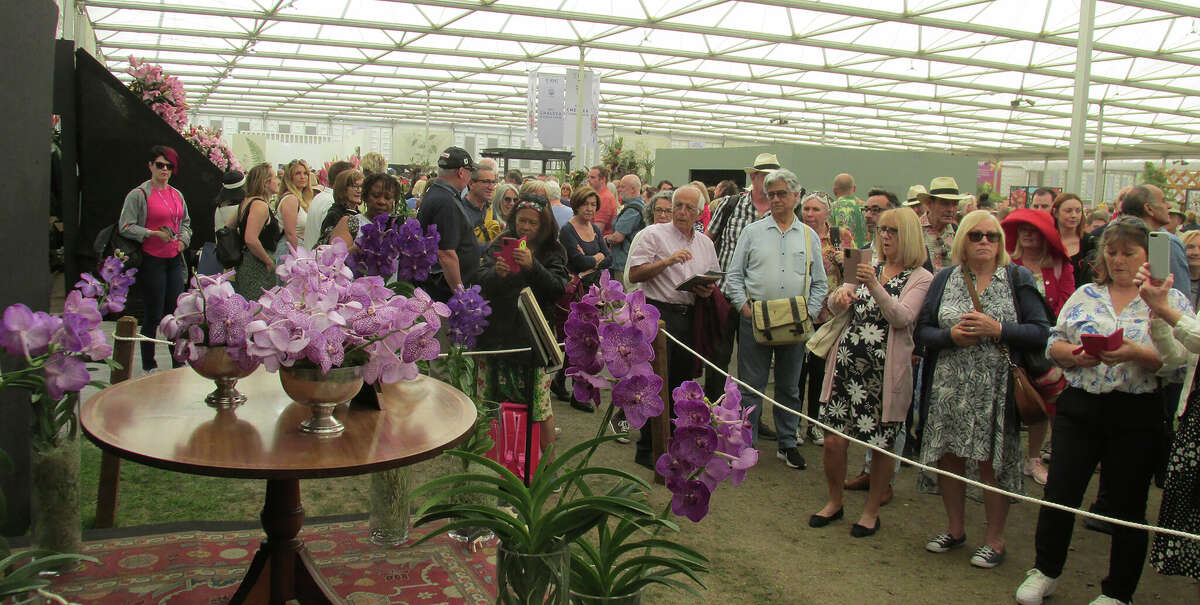 Crowds gather around the display of the Platinum Jubilee Orchid at the Royal Horticultural Society’s 2022 Chelsea Flower Show in London. The orchid was created in honor of Queen Elizabeth II, who toured the flower show May 23.

“When I go down to Florida Panther National Wildlife Refuge every summer to do Ghost Orchid research with our (IC) students, it’s not uncommon for me to have lunch with Parke,” Zettler said. “Last summer, he brought up the idea of presenting an orchid to the queen over our lunch conversation.”

Despite Zettler’s expertise and Wright’s influence, it wasn’t an easy task.

“We weren’t sure what it would look like, who would grow it,” Zettler said. “He and I had regular conversations on the phone and Zoom and with other people,” trying to find a new orchid variety that was suitable for the occasion that hadn’t yet been registered under a different name. 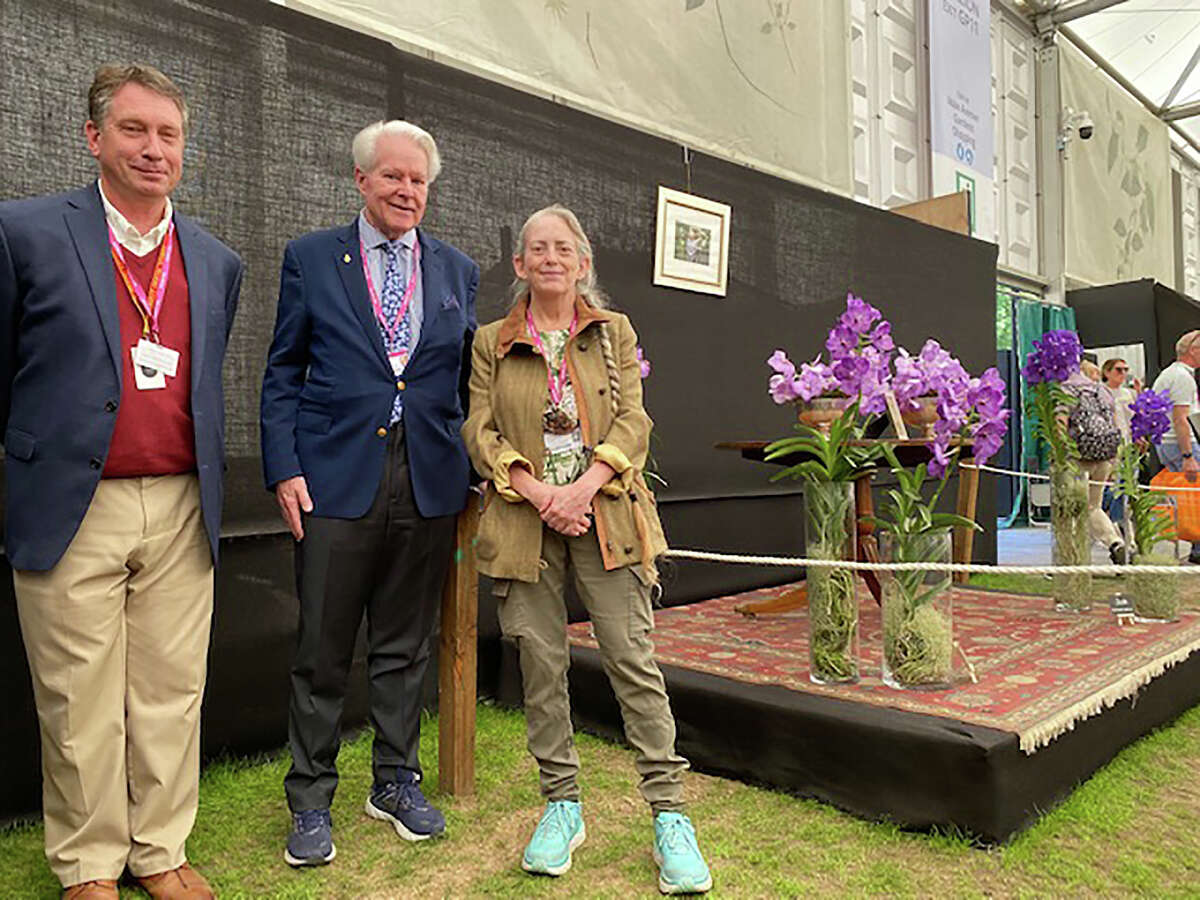 “He offered a Vanda hybrid that is just stunning, just beautiful,” Zettler said. “My mother saw it recently … and said it was the most beautiful orchid she had ever seen.”

Vanda is a genus in the orchid family. 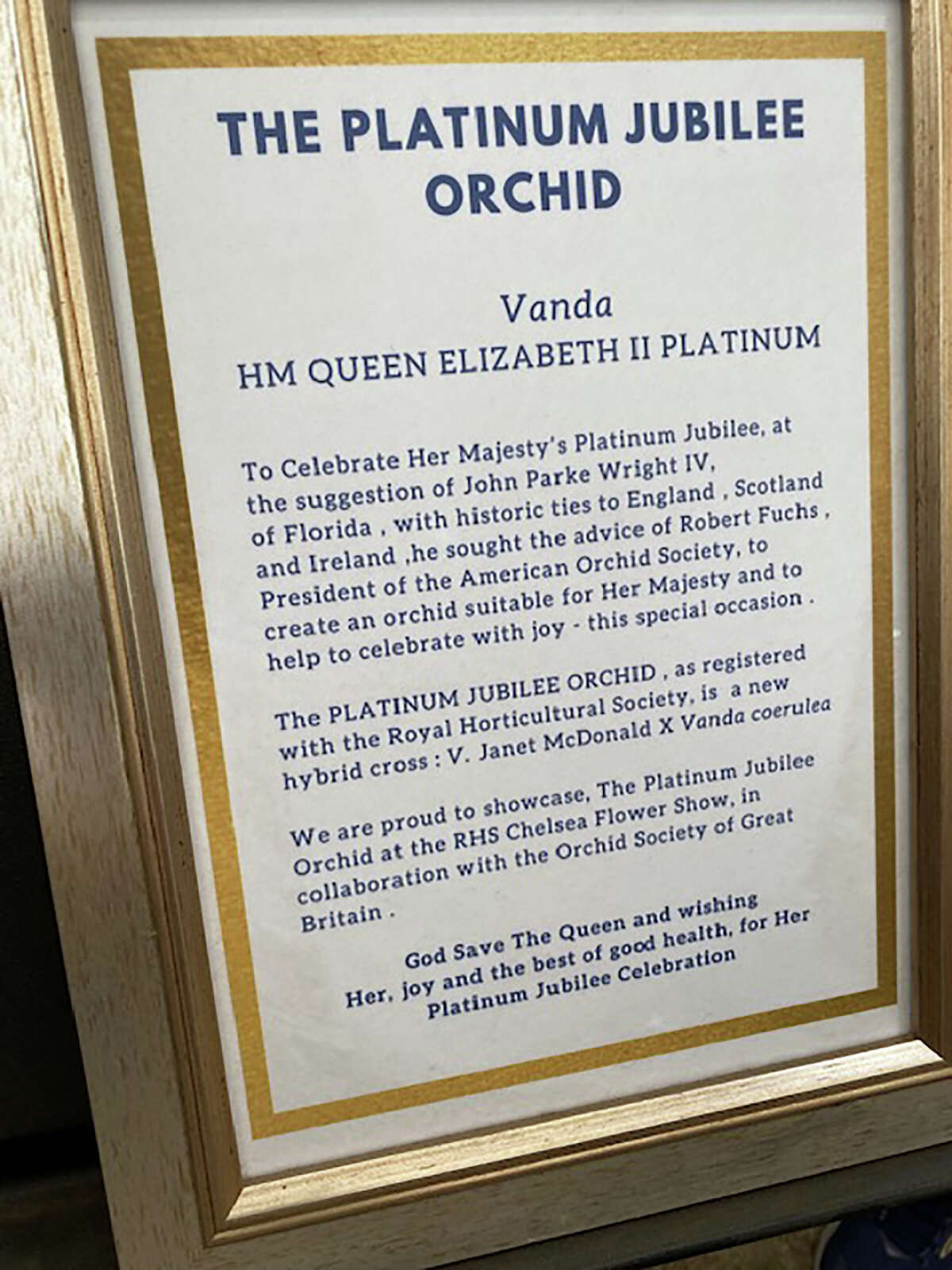 A sign at the Royal Horticultural Society’s 2022 Chelsea Flower Show in London gives the details of the Platinum Jubilee Orchid.

“They’re lovely flowers with very long root systems,” Zettler said. “They’re tropical and usually grow in trees with the roots hanging off of the tree limbs. It’s an orchid that growers can hybridize and make very different, create new varieties.”

Once they decided to use Fuchs’ Vanda hybrid — a mix of the orchids Vanda Janet McDonald and Vanda coerulea — the next step was to get it registered with the Royal Horticultural Society, the international cultivar registration authority for orchids.

Wright had connections, including with the British royal family, “but he didn’t know enough about the orchid community I’ve been part of for 30 years,” Zettler said. 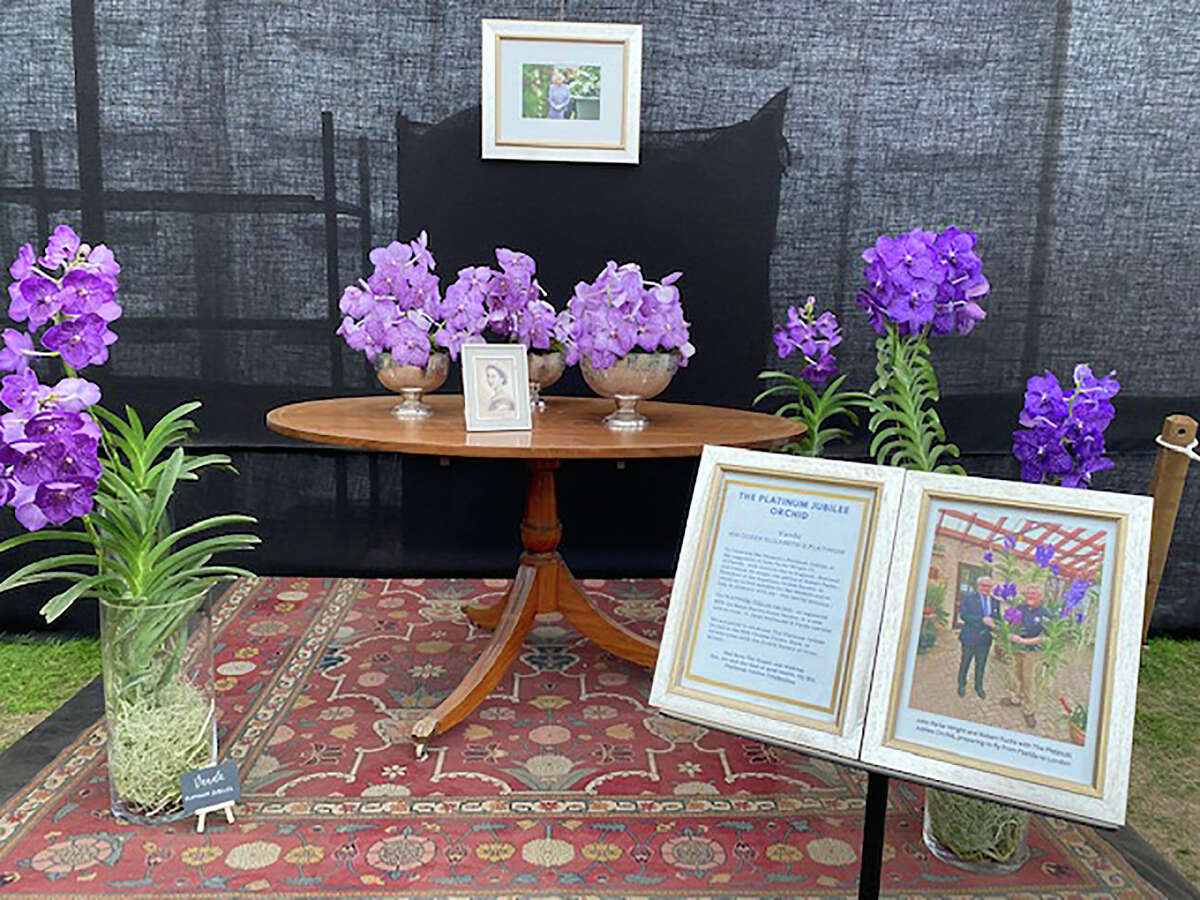 Photos of Queen Elizabeth II at different times in her life were part of the Platinum Jubilee Orchid’s display at the Royal Horticultural Society’s 2022 Chelsea Flower Show in London.

Zettler had his own connections, including at London’s Royal Botanic Gardens, Kew, with which he’s conducted research in Madagascar for several years.

“I was very pleased that my colleagues at the Botanic Gardens were so hospitable,” he said.

With the orchid now known as the Vanda HM Queen Elizabeth II Platinum, or the Platinum Jubilee Orchid, the next step was to present the flower, which happened this past week, during the Royal Horticultural Society’s 2022 Chelsea Flower Show.

The annual show on the 11-acre grounds of the Royal Hospital Chelsea typically draws 150,000 visitors or more, including the queen herself and other members of the royal family. It is known for launching gardening and horticulture trends. 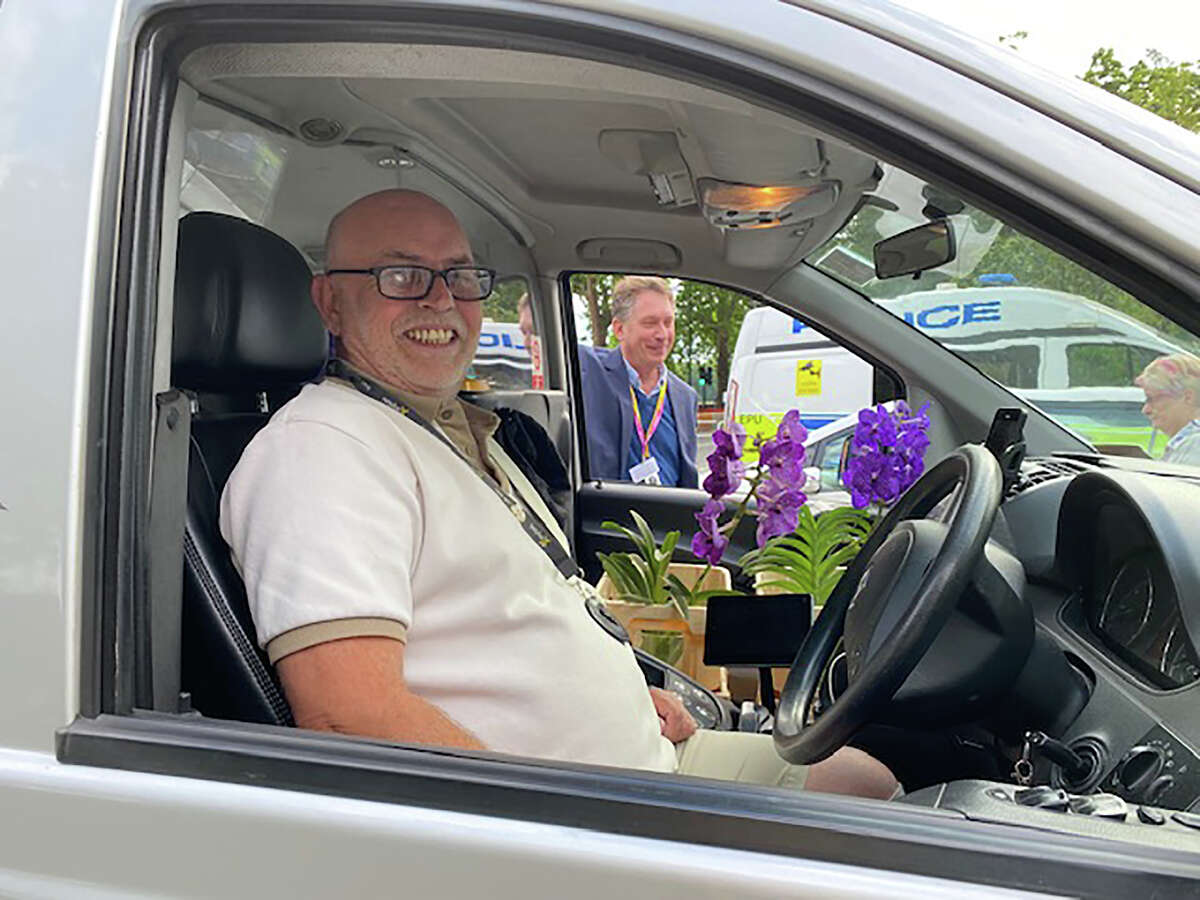 Dr. Lawrence W. Zettler (rear) looks on as an unidentified taxi driver prepares to take the Platinum Jubilee Orchid from the Royal Horticultural Society’s 2022 Chelsea Flower Show in London to be delivered to Queen Elizabeth II.

While Zettler missed the show’s opening day, when the queen visited, he flew to London on May 26 and spent a couple of the show’s latter days at the Platinum Jubilee Orchid’s display, answering visitors’ questions about the flower alongside Julianne McGuinness of the North American Orchid Conservation Center and Smithsonian Environmental Research Center.

“During the time I was at our orchid display, I was fixated with seeing the facial expressions of those who saw the Platinum Jubilee Orchid for the first time,” Zettler reported by email from London. “Quite a few people had a stunned look and were fixated by the beauty of the blooms.”

The orchid remained popular even as the show was closing, he said.

“At the conclusion of the show, as we were taking down the display, several people asked if they could buy the orchid on the spot,” he said. “We told them ‘no’ because they were headed to the queen herself. We then loaded the orchids into a taxi that waited outside the gate, and off it went.”

He and Wright went Monday evening to the Chapel Royal, the site of Prince George’s 2013 christening and Princess Beatrice’s 2020 wedding on the grounds of St. James’s Palace. There they joined Birgitte, Duchess of Gloucester; and the Rev. Canon Paul Wright, subdean to HM Chapels Royal, the only full-time clerical member of the royal household, for a choral performance celebrating Jubilee Week.

Zettler also will be finalizing the details of a book on which he is working with Philip Seaton, who has written four other books, one of which became the best-selling title for the Royal Botanic Gardens, Kew’s publisher, he said.

“Phil is regarded as the world’s authority on orchid seed storage, and it is a real honor to have worked with him,” Zettler said.

He also is not done working with Wright, with whom he intends to team up to raise funds for the North American Orchid Conservation Center. The pair also has plans to use the Platinum Jubilee Orchid in ongoing orchid conservation efforts.

“I just missed meeting the queen … at Chelsea, but I’m honored that she apparently appreciated the orchid and (I) was grateful for the opportunity to participate,” Zettler said.