The bride carefully planned the whole ceremony so her blind groom could “see” as many details as possible.

Anthony Ferraro is a wrestler, musician, and paralympic judo athlete for the United States. When he met Kelly Ann in 2017 during a gathering of friends in New Jersey, she realized that the athlete was severely visually impared (he can only see a little light outdoors). Noticing that no one was helping him, she decided to be Anthony’s guide throughout that day, giving him extraordinary attention that he had rarely received before.

The result? “I was like, ‘This girl’s amazing,’” the judoka told CBS News.

About a month later, Anthony invited Kelly to attend the New York premiere of the documentary A Shot in the Dark, about his athletic journey as a visually impaired person. It was the first date alone for the future couple, who, after that, started dating steadily. Anthony’s visual limitation didn’t present any obstacle; on the contrary, the difficulty was transformed into inspiration for many gestures of affection and care.

Kelly told USA Today how, in her house, she started to cover corners and sharp objects with bubble wrap so that Anthony wouldn’t hurt himself. She also came to realize how important the sense of touch is for him, and that he loves “the touch of velvet and soft fabrics,” a fact that would later inspire her wedding plans.

The athlete’s trips to compete also became much easier with the presence of his beloved. He old CBS:

My whole life changed when I met Kelly. I remember just not being able to see anything when I traveled, you know. She would describe these landscapes to me, visually, where it would paint these pictures in my head. And she literally became my eyes for the world.

After four years of dating, they got married in November 2021. And Kelly, of course, made sure to surprise her husband once again with a very delicate and meaningful gesture on their wedding day: she decided to get a special wedding dress so that her husband could “see” how beautiful it was by touching it.

Kelly opted for a model with several soft fabrics, including velvet and lace, with embossed flowers and tassels, so that by touching the dress, he could visualize it. She told USA Today, “The whole time at the aisle I was whispering to him ‘touch my dress, touch my dress,’ and it made me so happy to know he could feel and enjoy my dress as much as I did.”

And what did Anthony think?

“My mind was blown. I started crying. And it was just like – was able to see Kelly. That was the best part, I was able to feel her dress,” he told CBS.

The whole ceremony, actually, was planned so that the blind groom could “see” as many of the details as possible, organized by Kelly, who had a lot of help from her own mother. Even the choice of a ceremony outdoors and during the day was thought out so that he could “better see” the contrasts of light and shade.

In a statement to USA Today, Anthony summed it up: “The thoughtfulness and work behind making our wedding accessible for me meant everything. She’s truly my best friend and like I said, ‘my eyes in the world.’” 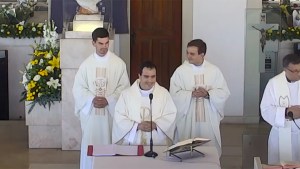 A long weekend turns into forever