When blind paralympian Anthony Ferraro first met his wife Kelly Anne Ferraro on the Jersey Shore, he had just run into a pole.

She was there to help — and she’s been there for him ever since.

From describing sweeping landscapes in great detail while traveling, to wrapping low-hanging tent beams in bubble wrap at their wedding, Kelly Anne has been Anthony’s look-out.

“Once we started doing life together, it was like life changed for the better,” Anthony, who has won two paralympic golds and two bronze medals in Judo competitions, told The Post. “It was like I could see for the first time in my life.”

The 25-year-old surfer, skater, Judo fighter and content creator describes Kelly Anne as someone who “goes above and beyond,” especially on their wedding day when she wore a “tactile dress,” specifically designed with many different textures to play to Anthony’s senses.

“As my hands went around her and felt every part of it, it was like I was seeing Kelly,” he said. “It was just the most thoughtful thing.”

The dress was custom-made in Brooklyn in partnership with Loulette Bridal, and she kept the surprise a secret until she walked down the aisle on their wedding day on Oct. 2. There were 3-D embroidered flowers, a velvet waistband and a combination of soft cotton and silk that Anthony fawned over at the altar.

Anthony could feel Kelly Anne by her dress, and it was like he could see her through touch.Credit: Scott Greenwald

From the earliest days of their relationship, Kelly Anne was considerate of Anthony’s tactile experience.

Their first date was to the premiere of a movie Anthony’s late brother created about Anthony’s journey as a blind athlete competing in Judo, and even back then, Kelly Anne was thinking about how he could best feel her beauty.

“She went and bought a velvet dress, which no one’s ever done before, like where they thought that much about me,” he said. “I remember her wearing the dress that day, and it was just so incredible.”

It was from that moment that Anthony knew he had found someone who would always go the extra mile for him. They started traveling together — Kelly Anne worked remotely for her tech industry job — and became a successful team as Kelly Anne helped Anthony create content online, such as videos and photos for Anthony’s social media of him singing, fighting and more.

“She has strengths where I’m weak and vice versa,” he said of their teamwork. “We had this vision together and we were building it out and it was amazing.”

Their vision, he said, was to “make people happy and get people out of their comfort zones.” 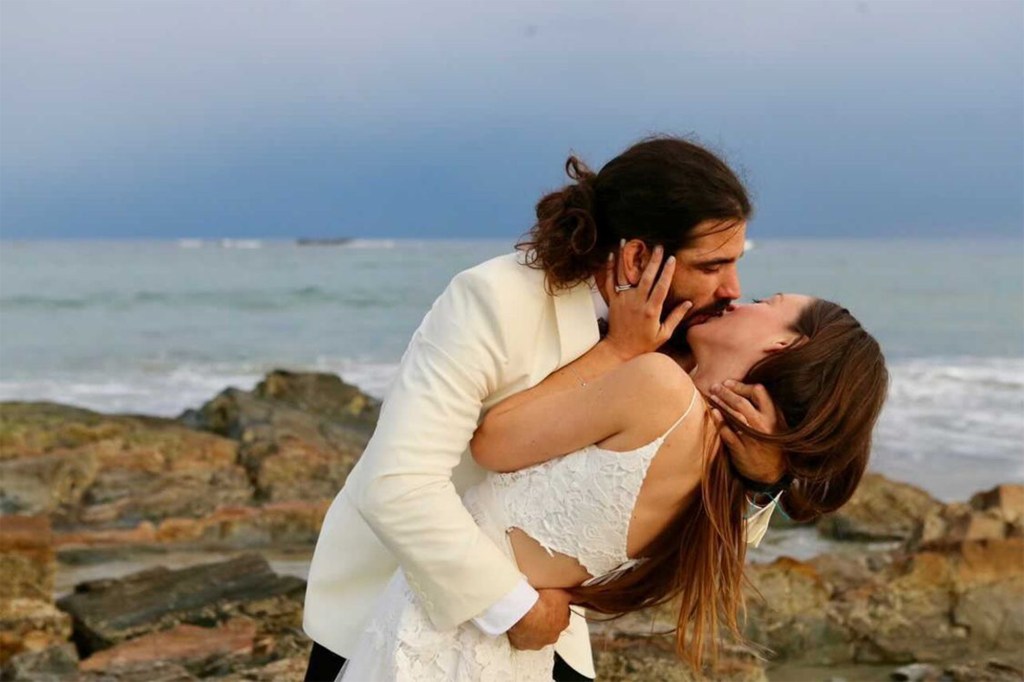 The couple met years ago through mutual friends, and instantly, Anthony said there was a spark.Credit: Scott Greenwald

Anthony shared the sweet moments from the couple’s wedding day on TikTok, to over 378,000 followers. The video, captioned “I married my camera person” — and his parter in content creation — garnered more than 100,000 likes.

“I was blown away, like my mind and my heart were just to the moon,” he said. “I was just crying.”

Kelly Anne’s styling further played to Anthony’s touch: She topped the dress with a velvet jacket, complete with fringe along the arms with soft tassels.

Fabrics and textures are “huge” for Anthony, who said he thinks his outfits look the best when they feel good to the touch.

“It’s just as nice for me to feel as it is for you to look at that beautiful dress,” he said.

Kelly Anne and Anthony make a “good team,” he said, working together to inspire people and spread “love and positivity.”

He thought he was going to have to go through life alone because no one could “keep up” with him — until he met Kelly Anne. Now, they’re together forever.

“Life is so much better shared together,” he said. “It was just like incredible — this best friend to do life with and my life just completely changed.”