Prince William and Kate Middleton have resumed royal duties in the wake of Queen Elizabeth II’s funeral. Less than 10 days after saying one final goodbye to the late monarch, the couple stepped out for a much less somber occasion. However, a body language expert says they didn’t appear to have “royal smiles” on their faces. Instead, the pair seemed to adopt “natural” smiles.

On Sept. 27, one day after the official week-long mourning period for the royal family ended, they were back to work. The parents of three, now the Prince and Princess of Wales, took a trip to their namesake country.

William and Kate, both 40, spent the day traveling to various Welsh cities. They greeted crowds, accepted bouquets of flowers from children, and even posed for photos.

The couple’s first stop was Anglesey, a place that is familiar to both William and Kate. It’s where they lived before and after their 2011 royal wedding while William trained as a Royal Air Force search and rescue pilot. It’s also where their oldest child, Prince George, 9, spent time as a newborn.

There they went to a lifeboat station and a local cafe and bar. Later, they visited a church-turned food bank in Swansea.

The trip marked William and Kate’s first visit to the country since becoming the Prince and Princess of Wales. 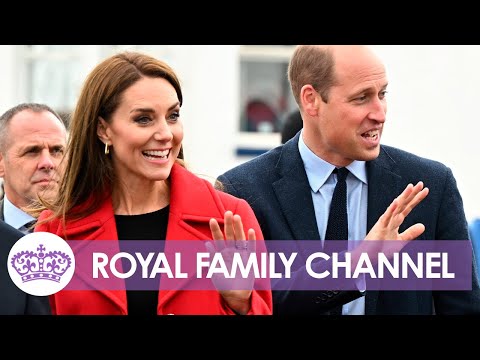