A bride found a way to bring her family together in an unforgettable way.

Vanessa Lynch married her husband Craig on Dec. 11, 2021, but before they said their “I do’s,” Lynch made sure to let her soon-to-be stepson know that she’s committing herself to him as well. The emotional moment was captured on video and was shared with South West News Service (SWNS) – a British news agency.

GROOM SURPRISES STEPDAUGHTERS WITH ADOPTION PROPOSAL AT WEDDING: ‘IT WAS PRICELESS’

Vanessa Lynch married her husband Craig on Dec. 11, 2021, but before they said their “I do’s,” Lynch made sure to let her soon-to-be stepson – Henry – know that she’s committing herself to him as well.
(SWNS)

Vanessa’s declaration was met with smiles, hugs and happy tears from Henry and Craig, 30.

The Lynch family’s union was a highly anticipated one since Vanessa and Craig got engaged in August 2019, but COVID-19 postponed their plans. Guests who attended the December nuptials were able to see the heartfelt moment firsthand in Cambridge, Minnesota.

“Henry is such a big part of Craig’s life and I felt that it was necessary to have him be a big part of the ceremony somehow,” Vanessa told Fox News Digital. “I had written the vows previously, but I wasn’t 100% about doing them in front of everyone because I didn’t want Henry to feel uncomfortable.” 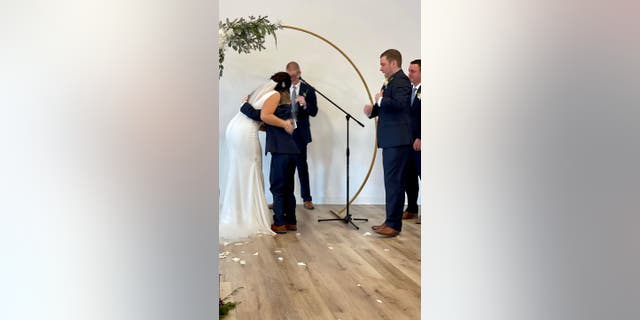 Henry, 9, immediately gave his new stepmother – Vanessa Lynch, 30 – a hug after she delivered heartfelt vows to him on her wedding day.
(SWNS)

However, when she finished delivering her vows to Craig, the moment just felt right.

“I’m not typically an outwardly emotional person but when I started saying the vows to Henry, I got choked up because I could see how much it meant to Henry to hear those things,” Vanessa said. “He totally wasn’t expecting it.

RING VIDEO REVEALS SWEET MOMENT WHEN MAN CARRIES BRIDE OVER THRESHOLD: ‘YOU SEE IT IN ALL THE MOVIES’

She added, “Henry said me doing that for him made our relationship feel even stronger than before.”

Vanessa and Craig first met each other when they were both sophomores in Augsburg College. They had no idea that in a few short years that they would be dating. 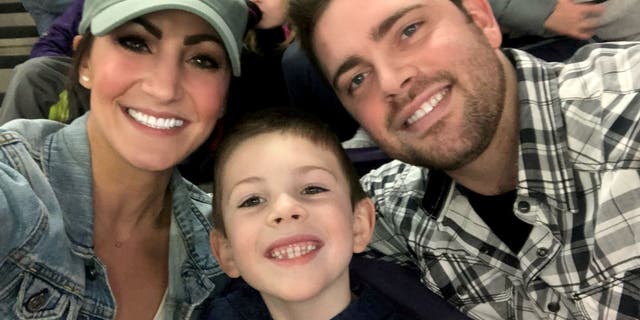 Craig introduced Vanessa to Henry a few months after they got together, and they all went to a monster truck show. Fast-forward to 2021 and the Lynches are enjoying their first holiday as an official family in Minneapolis.

“When Craig and I rewatched the video with Henry, all three of us got emotional all over again,” Vanessa shared. “Craig said that he was so surprised, and it meant the world to him.”