A newlywed has revealed she knitted her own wedding dress while commuting to work for nine months in the lead up to her big day.

Fashion designer Esther Andrews sat on a subway train in New York City every morning and night, knitting the dress she hoped to wear for her wedding.

The designer, who creates “slowly made knitwear for the modern bride” detailed her intricate pre-wedding process in a post to TikTok.

“I hand-knit my wedding dress on the New York subway for nine months and this was the journey,” Andrews said in the video.

Explaining the inspiration for the gown was a “space pirate” meets a “tomato patch”, because it was simply “silly and fun”, Andrews panned over sketches of her dream dress. 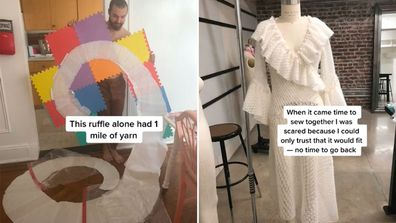 Andrews says she finished all of her wedding outfits five minutes before guests arrived. (TikTok)

In the clip, she revealed she used more than 6.4km of mohair lace yarn, with a single ruffle on the dress using 1.6km of the delicate material.

“When it came time to sew it together, I was scared because I could only trust that it would fit – no time to go back,” Andrews said, confirming she finished the garment the day before her wedding.

RELATED: ‘Disgusting’ hidden detail on wedding dress sends the internet into a meltdown

Unable to display TikTok on this browser

“I will always cherish this dress and the time that went into making it,” Andrews wrote, sharing images of her and her husband at their wedding.

In a second video, Andrews revealed she also hand-beaded the stockings she wore with the gown, designed to look “like a starry sky”, the garment taking several weekends to craft.

Garnering over 630,000 views on the video, users celebrated Andrews’ dress, calling it among “the most unique of our generation.”

“The most creative and iconic American wedding I’ve seen,” one TikTok user commented.

However, there was no bigger fan than Andrew’s husband, who commented, “Just so you know I’m the HUSBAND!! And if you’re thinking I’m lucky, YOU DON’T EVEN KNOW THE HALF OF IT.”

Andrews also made her husband’s astronaut suit for their wedding, inspired by NASA’s Gemini space suits.

The 54-piece pattern suit was made a week before the wedding and completed on the day – five minutes before the guests walked up.

“My astro boy!” she wrote on the video.

Paris Hilton’s Wedding Set For November, But Where Is The Venue?