A woman has been slammed over a “selfish” favour she asked from her grieving sister whose fiancé died in a car crash a month before their wedding.

The bride-to-be took to Reddit to explain she was meant to be married in August last year, but her fiancé never made it to the alter after tragedy struck.

Despite never getting to wear her wedding dress, the woman explained she had a personal attachment to it.

However, the bride explained her sister recently also got engaged and has asked her if she can have the dress for her own wedding.

The bride asked her sister if she could borrow the wedding dress she was met to marry her late fiancé. Source: Getty

“It was so devastating and pain is pretty much raw for me,” the grieving woman said.

“I moved back in with my parents to get some familiarity and support. My parents have been so helpful but my twin sister and I aren’t so close.

“She’s engaged and getting married before the end of this year … she and her fiancé can’t afford much and last week she and my mum asked if she could have my wedding dress to wear at her wedding.

“I was shocked by the request but didn’t react intensely, I just politely declined.”

The woman added her sister and mum began talking about financial struggles and accused her of refusing to help.

“I explained to them how this dress has a personal attachment and value after they said the wedding didn’t happen anyway and I didn’t get to make memories in it which was hard to hear,” she said.

“An argument ensued and my sister called me selfish and unsupportive, mum still sided with her and said I was wrong and that this dress will only stay hanging in the closet if I don’t ‘do something’ with it since my fiancé isn’t coming back and ‘I refuse’ to move on even though it hasn’t even been that long.

“Dad is on my side but I started feeling like maybe I’m not being helpful seeing my sister struggling and needing help. Mum said this might make or break our relationship for the years to come especially when I don’t have many people around me after this loss.” 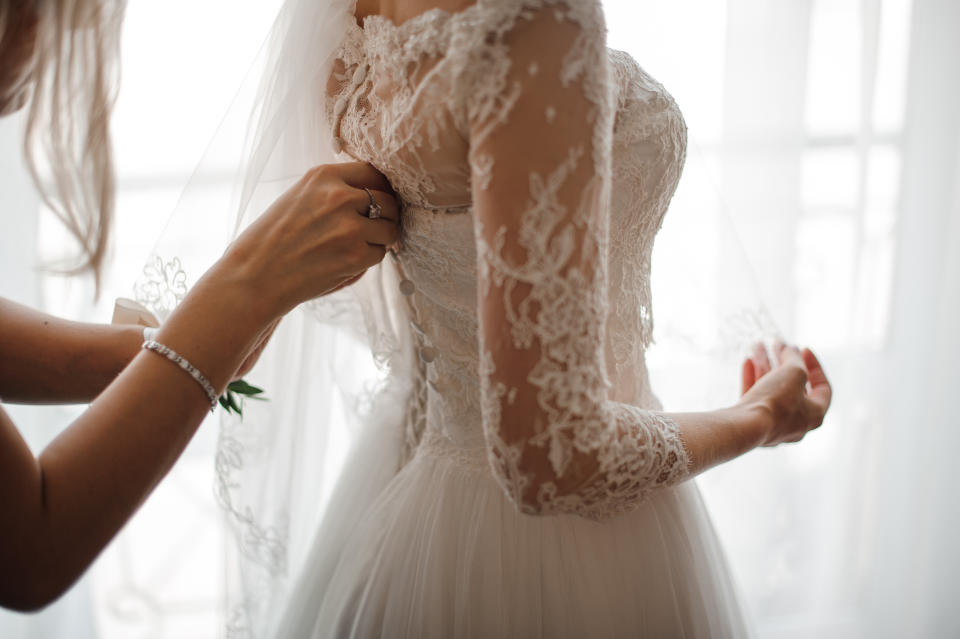 The bride was slammed for her request. Source: Getty

The woman added she saved up $2200 of her own money to buy the dress, but asked Redditors if she was in the wrong for not wanting her sister to wear it.

People were shocked by the mum and sister’s behaviour, with one saying they were “entitled”.

“They are emotionally controlling you cause they know you are vulnerable as of the moment, and she has the audacity to be mad at you for feeling attached to a gown that is rightfully yours,” one said.

“The relationship is already broken that they’d be so brazen to ask and so cruel to rub it in [your] face that [you] didn’t/won’t get to wear it,” another claimed.

“[You] DID create memories with [your] wedding dress: memories of going shopping for it, being excited to marry the love of [your] life, envisioning [yourself] in it on her wedding day – those are ALL memories,” a third added.

“Your mother and sister are so entitled.”

Or if you have a story idea, email us at lifestyle.tips@yahooinc.com.