A woman has been blasted on social media for “fat-shaming” her daughter-in-laws and grandkids after she put her old wedding dress up for sale on Facebook Marketplace.

The grandmother advertised her “beautiful” size two gown, which is an equivalent to an Australian size six, for $800 ($AU1,095), along with pictures of herself wearing it at her 1994 wedding.

In the ad, the seller said the dress has been in a “new condition” after she had it “professionally packaged to protect it”.

For more Lifestyle related news and videos check out Lifestyle >>

The grandmother was initially hoping to hand the “petite” dress down to a family member – but she decided to sell it after her sons “married bigger girls” so they would struggle to fit into it.

“If I had daughters I would, but even my daughter-in-laws were too big,” she responded in a message to a potential buyer.

“Even my granddaughters will be bigger and not fit the dress. I always hoped that one of them would have been able to, that’s why I’ve kept it all these years.

“It’s also why I paid to have it professionally packed and preserved, unfortunately my boys married bigger girls and my granddaughters will also be bigger than I am.”

She went on to say she had hoped that her sons would marry “someone small enough to wear it”.

“It’s too bad, the dress is gorgeous, and the way it flows when walking is breathtaking,” the grandmother said.

“When I bought it, it was a top of the line dress. I thought at least one of the granddaughters should be able to wear it… Well, no such luck.” 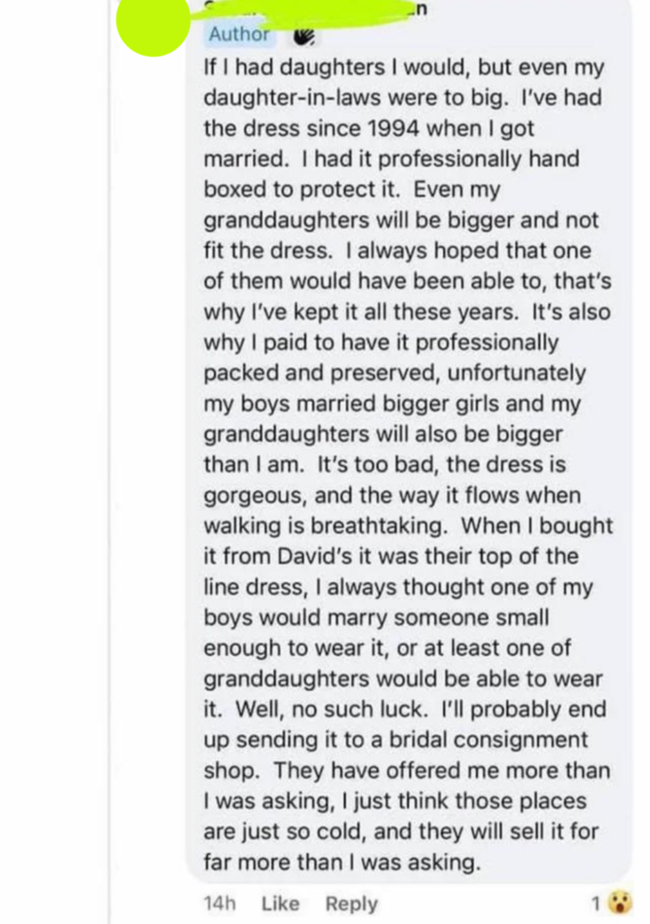 The woman made the controversial comments while responding to a buyer. Credit: Reddit

Her controversial ad was re-shared on Reddit, with thousands voicing their disapproval.

“Fat-shaming the women in two generations of your family, nice. Grandmother of the year,” one wrote.

Many believed that the dress was “too dated” to appeal to modern day brides.

“I’m not saying I would purposely gain 10kg to not have to wear that dress, but I’m not not saying it either,” another said.

While one added: “No one of any size – small, medium, big, bigger or biggest – would want to wear this white polyester abomination today.

“I hope she can sell it, and put the money towards the help she so obviously needs.”