A bride has been slammed online after she criticized a wedding guest—who came from overseas—for not bringing a “token” gift.

The woman shared the context in a post on Mumsnet, under username Onlychildhamster, where she explained she and her other half got married legally years ago, but put off the celebration until they could afford it.

She explained she was having a ceremony in London, where she’s thought to live, and her home country, believed to be Singapore.

The bride explained that she told her friend he could attend the function in England, but he insisted on flying to the much more lavish celebration overseas.

She wrote: “My home country has a tradition where the guests effectively pay for the wedding; there is a ‘market rate’ for cash gifts and it is usual that people would look up the cost of a seat at a wedding (rates easily available online) and friends are expected to at least cover the cost of a seat; family often give in excess that amount (esp if they are older and they have to give additional red packets during the tea ceremony).

“This is just the cost of the banquet; of course it is impossible for a guest to estimate cost of photography, flowers, dress etc. So basically it is unheard of for a guest to not give a cash gift at the wedding.”

She claims she didn’t explain this to her friend, asserting she wasn’t going to “fall out” with them over it, acknowledging he “spent a lot of money to travel to my wedding.”

But she was irked that her guest didn’t bring a gift, or even a card.

Revealing she paid £78 ($102) per head for the meal, she added: “He said he wanted to go to the overseas one as I explained the one in London would be a simple religious ceremony, and the one in my home country is more lavish (7-course Chinese banquet in 5-star hotel) as my relatives expect a certain level of luxury.”

Despite claiming “it’s not about money,” as she revealed she received more than the cost of what she spent from family and friends as gifts, adding: “But AIBU to think that he could have given a small box of chocolates as a token? It could be from Lidl, I don’t really care. Just a small token to say congrats… or a card. I would have been happy.”

Her post, on Monday, has amassed more than 130 replies, and can be read here, as people generally felt she was being “greedy” for expecting a present.

Bananarama21 wrote: “Expecting people to give you gifts when you had a wedding abroad and in the UK is beyond grabby, the fact you state you made a profit is quite cringey in all honesty. You clearly got too much time on your hands.”

Crocus776 commented: “I think this is one of the saddest threads I’ve ever read! Your friend spent a lot of money to attend your wedding, used up holiday entitlement. How much do you think it cost him to attend? Culture or not, you’re greedy and it clearly was all about the money. I asked for no gifts at my wedding.”

CoalTit replied: “Everything you’ve said, OP, from your assessment of your friend’s financial status to your remark that he didn’t refund you the cost of the SIM card you bought him, indicates that you aren’t telling the truth when you say you would have been happy with a box of chocolates.”

AtillatheHun simply wrote: “You know the price of everything but not the value of friendship. Please, just stop posting. It’s embarrassing.”

Buttons294749 raged: “Yabvu! Really grabby. You invite people to your wedding because you value their company not to make money. I paid more than £78 per head and plenty of people gave no gifts.”

Froi replied: “This thread will make me think twice about attending any similar weddings in the future, how grabby and ungrateful of the cost and efforts your friend went to. And a box of chocolates would have been an insult.”

Although some claimed they would always bring a gift, as SoupDragon admitted: “I would never not give a gift at a wedding (unless specially asked not to). I think it’s incredibly rude.”

And BritInUS1 added: “If I was paying to travel to a wedding, I wouldn’t also give a gift. A card, yes, but not a gift. You didn’t explain the culture to him either, so how could he possibly know?”

The chart below, provided by Statista, shows the cost of an average American wedding.

You will find more infographics at Statista

According to wedding website Hitched, the amount guests should spend ranges from between £35 ($45)-£50 ($65) for colleagues and those invited to the evening-only, £100 ($130) and above for couples, immediate family and those in the wedding party, while a single guest should splash £50 ($65).

While they also quoted etiquette expert, Diane Gottsman, who reflected on how those amounts change if the wedding is abroad.

“The amount doesn’t change significantly: it’s still a wedding. You should factor the gift into your budget and decision to go or stay behind,” she said. Although Hitched did point out there can be cultural differences at play, echoing what the bride said in some instances about the cover cost.

In some countries, the website said: “Typically guests work out the amount to give based on how much the wedding meal would have cost, so the fancier the meal and venue, the more money is given.”

Although they added: “One important thing to note is that your gift shouldn’t be affected by whether it’s a destination wedding. Even if you are paying for flights and accommodation, a gift is typically expected, although most couples will expect something smaller due to your expenses getting to the wedding.” 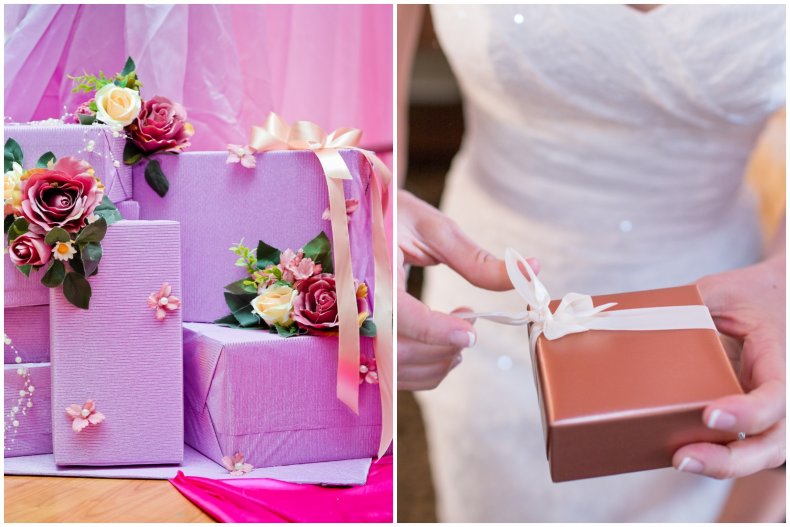 File photo of bride and presents. A woman was put out after an overseas wedding guest didn’t bring a gift.
paulrichstudio / Adil Chelebiyev/Getty Images

Princess Diana Exhibition Shows More Than 700 Items From Her: PHOTOS

How To Design Perfect Flower Arrangements For Your Wedding Day