An African dad has melted hearts on social media after making his daughter’s wedding gown which many described as beautiful.

The bride with the Instagram handle @colombetbz took to the social media platform to share an adorable video of when the sewing began and the beautiful outcome.

Many social media users have showered praises on the bride’s father for making such a beautiful gown for his daughter.
Photo credit: @colombetbz
Source: Instagram

In the adorable video, the man could be seen displaying his sewing skill with his machine. The video also shows the lady wearing the gown on her wedding day with her father walking her down the aisle. 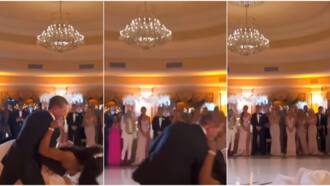 Falling in love: Reactions as couple suffer embarrassing fall during 1st dance at their wedding in viral video

The lady and her husband had amazing photoshoot and the beauty of the gown got many talking as they flooded the comment section of the post.

According to the lady, she and her dad drew the gown together and the man sewed it. She shared the video to celebrate her dad’s birthday.

Below are some of the reactions:

“Having your dad make your wedding dress makes it extra special.”

“This dress is gorgeous hun. Daddy did his thing.”

“Oooh wooow. That’s soo beautiful. You Dad is the best.”

“This is so precious.”

“Oh wow, Such an amazing father!! Blessings to you both!!!”

In other news, a young Nigerian bride, Chioma Inyang, who went viral sometime in February 2021 for rocking an Ankara wedding gown has finally shed more light on her decision. 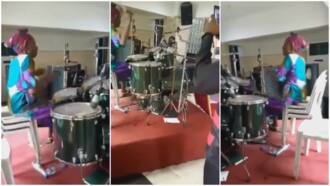 Nigerian grandma takes control of drum set, makes sweet music with it in church, many react

In an interview with BBC News Africa, the young lady who is also a fashion designer, explained the reason behind her choice of wearing an Ankara wedding gown.

According to Chioma, some people said that she opted for Ankara fabric because she did not have money. She quickly turned down this claim and said it was not the reason for her choice.