A woman has detailed how her bridezilla friend’s lengthy list of demands and insults has led to her and other bridesmaids dropping out of the wedding.

The 20-year-old opened up about their falling out on Reddit’s ‘Am I the A**hole’ forum, saying the 23-year-old bride-to-be — whom she referred to as ‘Katie’— has forbidden her bridesmaids from getting engaged or pregnant because it’s ‘her’ year.

Katie also expects her bridesmaids to pay a total of $2,000 each for her wedding events, including buying themselves new clothes.

The Reddit user, whose handle is u/Extreme_Demand4217, said she was asked to be a ‘replacement’ bridesmaid when she was pregnant and was excited until she learned more about the requirements. 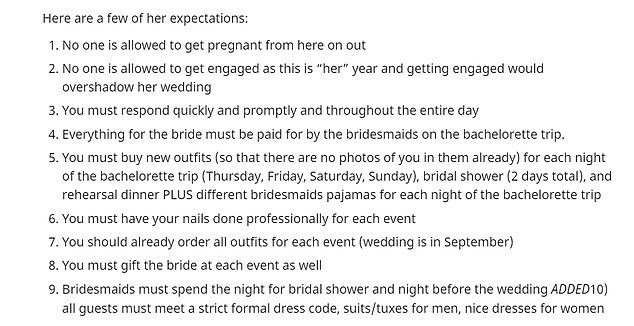 She shared a list of the bride’s demands on the ‘Am I the A**hole’ forum, saying she was considering dropping out of the bridal party herself

‘Since I have joined, five people have dropped out due to her attitude and high expectations,’ she wrote. ‘Well Katie is upset because of everyone dropping out and the amount of people she has kicked out.

‘She wants everyone to drop everything this year for her wedding,’ added, noting that Katie had ‘kicked one personal attendant out for getting engaged.’

The woman shared a list of Katie’s expectations, starting with the rule that no one is allowed to get pregnant or engaged because these life events would ‘overshadow her wedding.’

‘You must respond quickly and promptly and throughout the entire day,’ she continued. ‘Everything for the bride must be paid for by the bridesmaids on the bachelorette trip.’

On top of that, Katie told her bridesmaids that they had to buy new outfits for each night of the bachelorette party, bridal showers, and rehearsal dinner because she doesn’t want them wearing something they were already photographed in.

They also have to buy ‘different bridesmaids pajamas for each night of the bachelorette trip’ and have their nails done professionally for each event.

Even though the wedding isn’t until September, she wants the new outfits for each event ordered ASAP, and they ‘must gift the bride at each event as well.’

‘Bridesmaids must spend the night for bridal shower and night before the wedding’ and ‘all guests must meet a strict formal dress code,’ she added.

The Reddit user said the rough estimate for everything she wanted was around $2,000 per person ‘on the low end.’ She noted that she was supportive at first, but that quickly changed.

‘I’m two weeks postpartum and Katie came to take my baby’s newborn pictures as I had hired her,’ she explained. ‘When she came she insulted my weight multiple times and reminded me I need to lose my baby weight before her wedding.’

The woman said her pal then proceeded to insult her newborn daughter, saying ‘it was sad’ she looked like her ‘hillbilly’ father and insinuated her dark skin tone was a ‘bad thing.’

‘My boyfriend is half Native and when I told her that, she backtracked really quickly on her comment,’ she recalled. ‘However, she began to make fun of my skin tone because I am a redhead and quite pale.

‘She keeps commenting on Facebook posts of my daughter about her looks, and even [though] I’ve blocked her from seeing those posts, it still p****s me off.’

The Reddit user wanted to know if she was in the wrong for wanting to drop out of the wedding and never speak to her friend again, saying her boyfriend thinks she is ‘overreacting.’

She also shared screenshots of some of Katie’s demanding text messages to their bridal group chat for emphasis.

A majority of the commenters dubbed Katie a ‘bridezilla’ and bad friend while urging the original poster to drop out of the wedding immediately.

‘That list has “bridezilla” written all over it, plus having five people drop out should be a red flag,’ one person wrote. ‘It’s her wedding, but it’s your mental health. Drop out, and go LC when the s**t hits the fan and she sends the flying monkeys to harass you.’

‘Something is mentally wrong with her to even think this is slightly acceptable,’ someone else agreed.

‘Drop out NOW! And I’d drop her as a “friend” as well,’ another advised. ‘I thought h*ll no after reading the list of demands, and that’s before I got to the other insults. Does she want you to pay for her wedding dress and reception as well?’