Days before her wedding, Lauren Hughes darts around her Columbus Park apartment, radiating years of pent-up joy. Her outfit, like her couch, is billowy, cheerful and red. Within minutes of my arrival — having introduced herself and her cats and shown me to a chair in the living room — she reaches into her bedroom so swiftly I almost miss it.

She returns with a wedding dress, a luxuriously long white gown embellished with lace and beads. She handles it tenderly, but not timidly. Hughes purchased the dress back in 2019, and by now, she knows it quite well.

The original save-the-date for this wedding now doubles as a historic artifact. On the postcard, Hughes wears a simple black dress, holding hands with her fiancé, Kansas City musician Marco Pascolini.

Pascolini, who’s performed as Mr. Marco in local bands since the 1990s, wears a suit. They smile at each other on a rooftop patio in the Crossroads. “Save our date,” reads the card. “May 30, 2020.”

Hughes remembers dropping a big stack of these cards in the mail on March 1, right before Kansas City went on lockdown. She’d been proud of the guest list.

“That guest list had been marinated over,” she says. “It was a work of art. It was a masterpiece.” 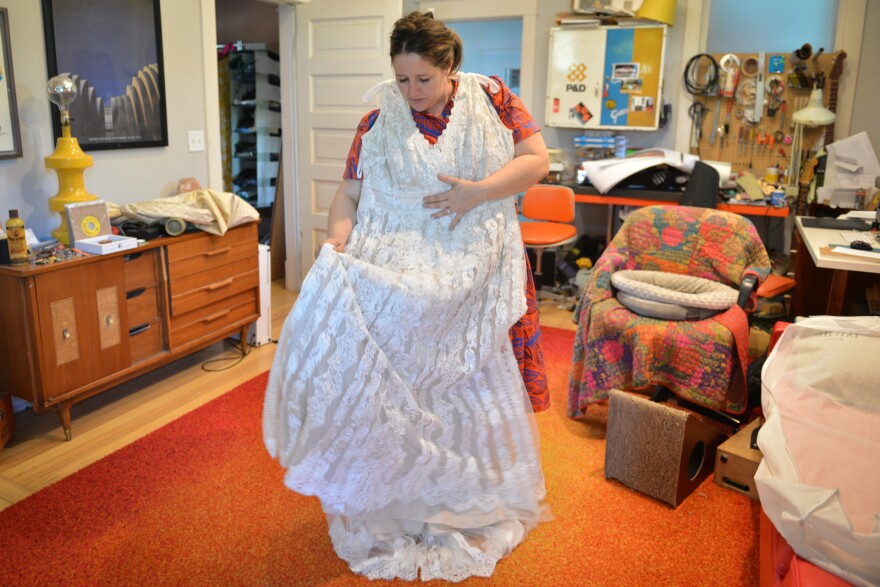 Lauren Hughes displays her wedding dress, which has waited in her closet much longer than expected.

Within days, satisfaction gave way to concern. The couple paid close attention to news from Italy, where COVID-19 cases were spiking — and where the groom had family, who were planning to attend the wedding.

They caught a glimpse of what the United States might face if the story played out here like it did in Italy. “We figured, ‘Oh, we’ll flatten the curve and we’ll get married in October 2020,” Hughes recalls.

They paid most of their vendors in full, but Hughes said the vendors all readily agreed to postpone without penalty. Three weeks after the first postcards, Hughes and Pascolini sent a second batch, with May 30 crossed out and the new date — Oct. 30 — written beside it.

“I bought a postcard for every guest, forgetting that guests live together,” she explains with a laugh. “So we had enough postcards. We really thought it would all be over by October.”

Taking her wedding off the books once was actually kind of OK. Doing it a second time was much harder.

“We didn’t wish to gather if we didn’t feel safe,” Hughes explains. “Neither of us could have an event where people feel nervous, even in the back of their heads. August was when it was like, ‘Do we go ahead with this?'” 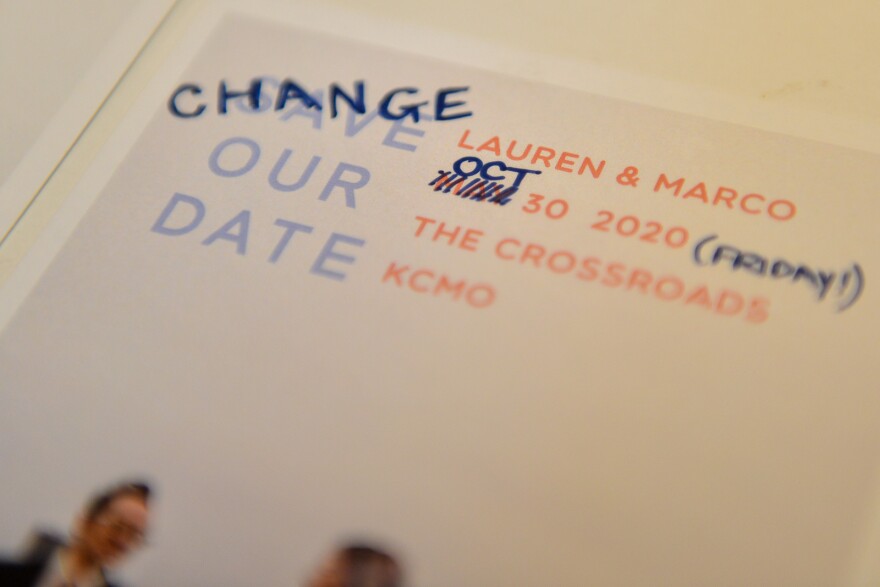 The first reschedule was a little messy, but relatively painless.

The couple reviewed their options. Hold a quick, tiny wedding with masks required and no dancing? But they didn’t know if Hughes’ parents, who live in Texas, would be able to travel, or if Pascolini’s mom, a cancer survivor, would be able to hug her son on his wedding day. That scenario seemed way too bleak.

“So much was taken away from so many people that we did have a perspective of: This is a party. You know? We could go to the courthouse, we could have a marriage. This is just a party and parties can happen at any time. But to have your heart set on something and then change it and change it again—” Hughes heaves a big sigh. “A wedding seemed sort of trivial. But I did allow myself to grieve it.”

After scrapping their October 2020 wedding, the couple didn’t pick a new date. They didn’t send another postcard.

“Having it be a big question mark, like just a big TBD, it really stopped feeling real,” Hughes admits.

That’s the catch when it comes to planning right now — and not just weddings. Planning anything. Work projects, back-to-school arrangements, vacations, holidays, even ordinary nights out to catch a concert or a play with a friend.

We’ve been at this long enough to know that the near-future we base our plans around may turn out to be a mirage. But, realistically, what is a better option? 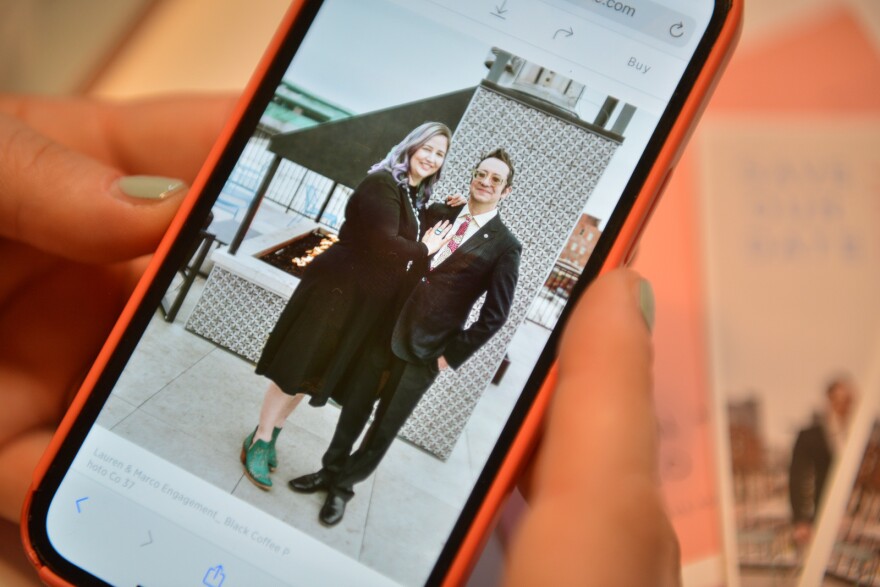 Days before her wedding, Lauren Hughes brings up an engagement photo that feels like it was taken a lifetime ago.

We can prepare for the need to adapt our plans and pivot, which barely trails “unprecedented” in this contest for buzzword-of-our-time. We can go ahead and make plans with gusto, shushing the little voice that urges caution, because that voice is annoying and debilitating. This is, after all, what poet Mary Oliver famously called our “one wild and precious life.” Yes, we live in a pandemic, but we do still live.

The other option is to stop planning altogether. Curl up with a book on the couch for the foreseeable future.

But looking forward to things isn’t just a want. It’s a need. So we plan and cancel, plan and reschedule, plan and postpone. We believe in our plans less and less. But we plan anyway, hoping eventually, some of those plans will stick.

Lauren Hughes and Marco Pascolini planned anyway, motivated by a vision of clanking glasses and hugs. When you prepare for a wedding three times, you do a lot of soul-searching about why weddings matter in the first place.

After quarantining during a pandemic and spending “obscene amounts of time together,” Hughes says their relationship felt plenty solid already. But still, they wanted to carry out the time-honored tradition of people gathering to bless this union. And for that, they could wait. 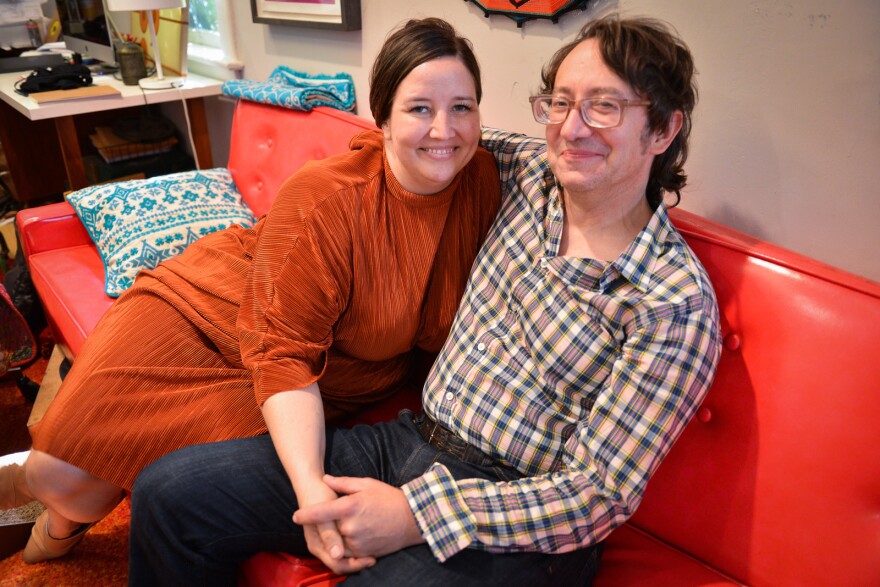 For newlyweds, Lauren Hughes and Marco Pascolini have navigated some wild life lessons together.

By the time this article is published, the Hughes-Pascolini wedding will finally have happened.

In the end, it was the photographer who forced their hand, with the calendar filling back up again. So the couple picked their third and final date: Sept. 24 2021.

Over the last few weeks, because of the delta variant, this thrice-planned wedding underwent a major redesign. The couple moved the party to the rooftop, made vaccination a requirement, and decided to box up the catered food so people wouldn’t congregate around a buffet.

They couldn’t run the new date by everyone on the list, and there’s no way to eliminate risk altogether, so they did have to accept that some people might not feel comfortable attending. But they were ready. Their third perfect guest list would be their last perfect guest list.

Hughes’ white gold engagement ring has faded from two years of wear. Her wedding band — having stayed in the box — remains shiny and bright.

Their marriage is already something old and something new. It’s a dream and a reality. And after recommitting three times, it’s both the promise and the fulfillment.