It was far from the dry, dusty wedding in Western Australia’s wheatbelt that Benn Ellard and Briege Whitehead had planned, but when they headed to Antarctica on the RSV Nuyina’s second voyage to the icy continent, they started dreaming of a much colder, visually spectacular ceremony.

With COVID-19 meaning their five-year engagement had dragged on longer than the documentary makers would like, they stashed some wedding clothes in their luggage, just in case.

“We thought that who knows, there might be someone who is a registered celebrant onboard and if the opportunity arises, fantastic, and if there’s not, that’s fine as well,” Mr Ellard said.

Despite there being no celebrant among the Nuyina’s crew, the expeditioners found out about the idea and ran with it.

“Basically, a wedding planning committee got formed and it went from there,” Mr Ellard said.

“Briege and I didn’t have a whole lot to do with the actual planning of it, we just sort of rocked up on a beautiful Sunday afternoon in Antarctica and everything had been organised.”

The crew crafted decorations to kit out the vessel and played wedding music at the ceremony, while the chef constructed an iceberg wedding cake, adorned with little penguins. The vessel’s captain performed the “wedding” service on the helideck, about a day before the Nuyina was set to arrive at Davis Station, giving the couple a moment they would never forget.

“For everyone to go to such lengths to make the whole evening and the day such a special event for the whole ship, not just us, was quite incredible,” Mr Ellard said. 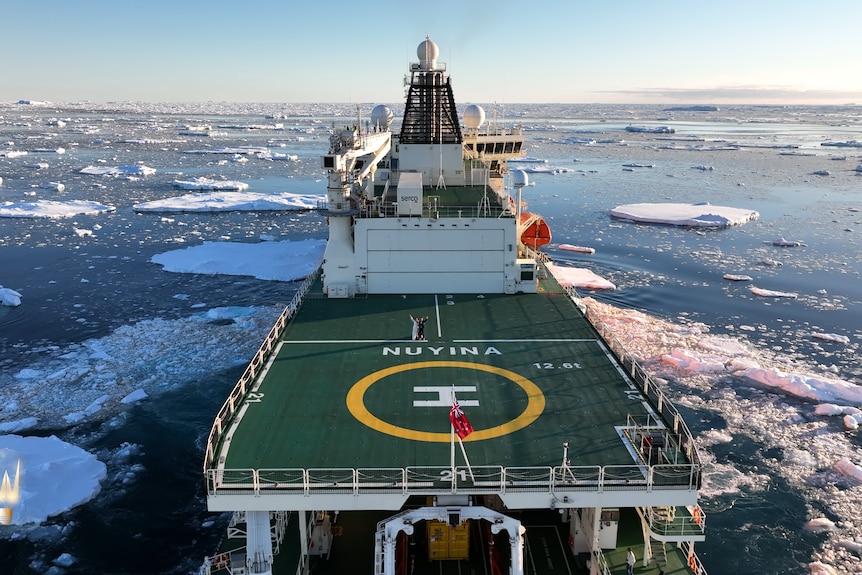 An aerial shot of the happy couple on the RSV Nuyina. (Supplied: Briege Whitehead)

“It was certainly a pinch yourself kind of moment, you can’t even dream or think of something like that happening.

“You’re literally out on the helideck of Australia’s brand new icebreaker vessel surrounded by icebergs going past with penguins and whales in the water … we certainly won’t forget it in a hurry.”

The couple will wait until their September wedding in Bruce Rock to tie the knot officially, surrounded by friends and family. The couple described it as a “pinch yourself” kind of moment.(Supplied: Briege Whitehead)

Set the ABC News website or the app to ‘Tasmania Top Stories’ from either the homepage or the settings menu in the app to continue getting the same national news but with a sprinkle of more relevant state stories.

Here’s a taste of the latest stories from Tasmania: