A Ukrainian couple married today in the besieged nation, providing a brief moment of respite as Putin’s forces continue to menace the capital city of Kyiv.

Members of the Ukrainian Territorial Defence Forces, Ksenia and Roman, were pictured exchanging vows and sharing a tender kiss, a sight for sore eyes among their war-weary comrades.

Ksenia, wearing a white top and holding a bouquet of red and white roses, stood alongside her now-husband Roman, who attended the ceremony still donning his camouflage army garbs. 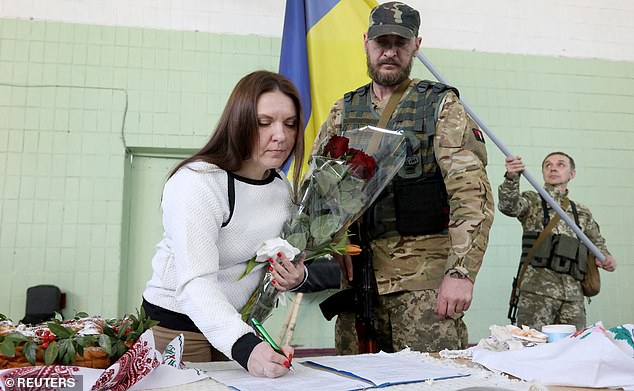 Ksenia, wearing a white top and holding a bouquet of red and white roses, stood alongside her now-husband Roman, in an unlikely wedding on the frontline in Ukraine 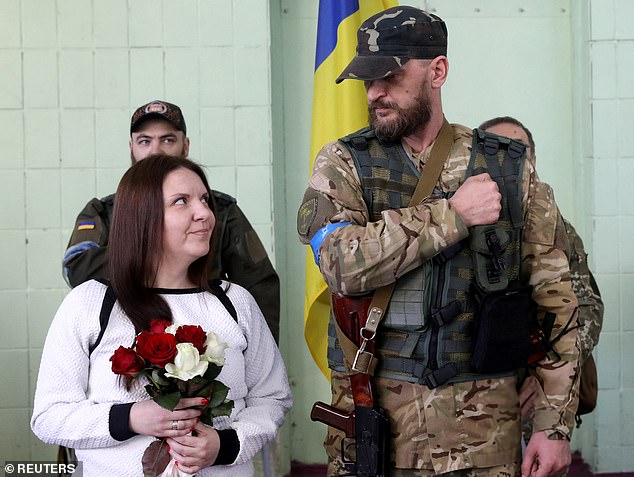 Roman, donning his camouflage army garb, looks into the eyes of his new wife, Ksenia, as the two commit to spend their uncertain futures together

Perhaps surprisingly, it is not the first union in holy matrimony recorded between Ukrainians battling on the frontlines.

On March 13, a couple decided to get married before taking on Russian troops in the outskirts of Kyiv.

The couple, who met for the first time during the war in Donbas seven years ago, were photographed at the ceremony held in a hospital in Brovary.

The soldiers began their relationship in 2022 when they met by chance during the Russian invasion of Ukraine. 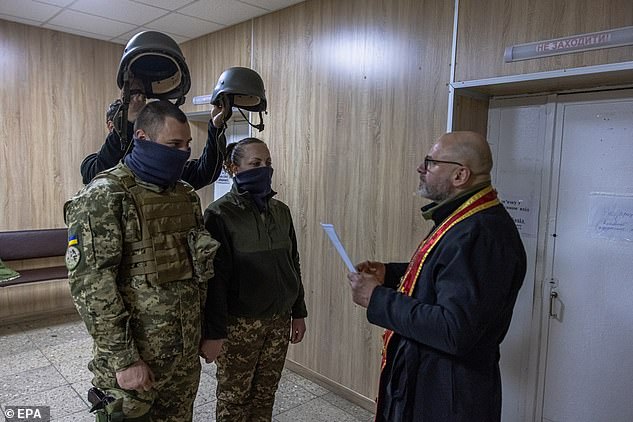 The couple were married in a hospital in Brovary, on the outskirts of Ukrainian capital Kyiv 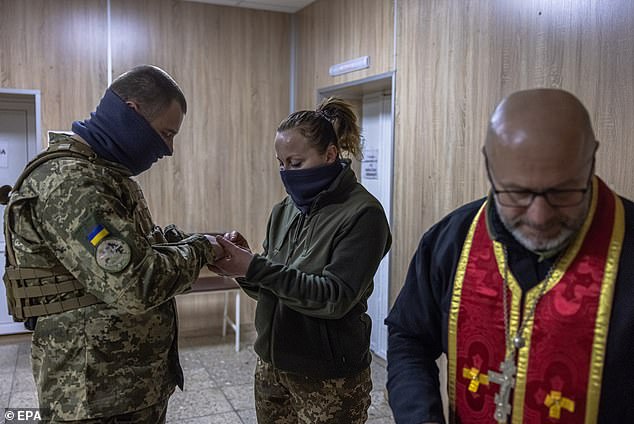 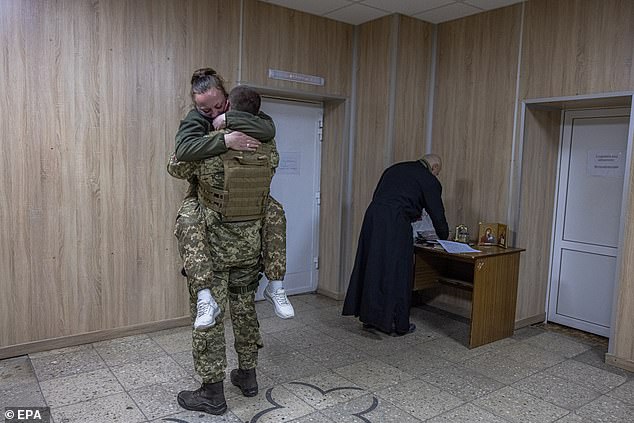 Pictured: The couple said they decided to get married because they face ‘hard times ahead’

‘There is a hard time ahead of us, so we decided to do it now’, said the bride as military chaplain and medic Yevgeny led the ceremony for the couple.

Due to security reasons, the names of the couple are not disclosed.

Earlier this month, Kyiv’s mayor paid a visit to another newlywed couple who got married on the frontlines, donned in military uniform and serenaded by soldiers. 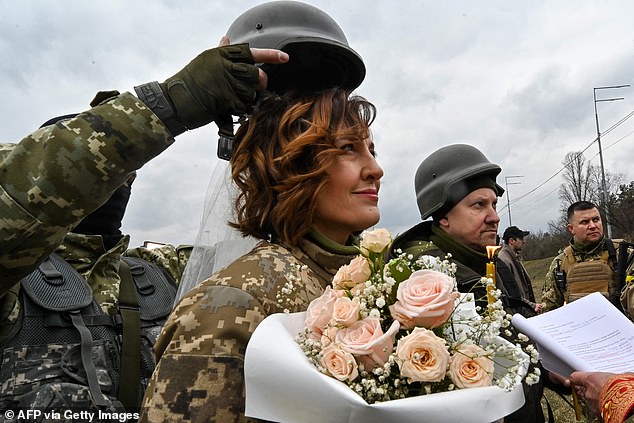 Video shared online showed a loved-up pair, Lesya and Valeriy, who are with the territorial defence, celebrating the nuptials near Kyiv as former champion boxer Vitali Klitschko offered the pair his blessings and gives the bride a good luck kiss.

In a tweet, Klitschko shared a clip of the ceremony, with the pair surrounded by applause, cameras and fellow soldiers, saying that ‘life goes on’.

A video shows the grinning couple holding flowers as fellow soldiers around them shout ‘Glory to Ukraine!’ in the heartfelt moment, captured yesterday.

Lesya could be seen holding a bouquet of flowers as both her and Valeriy clutched champagne flutes. 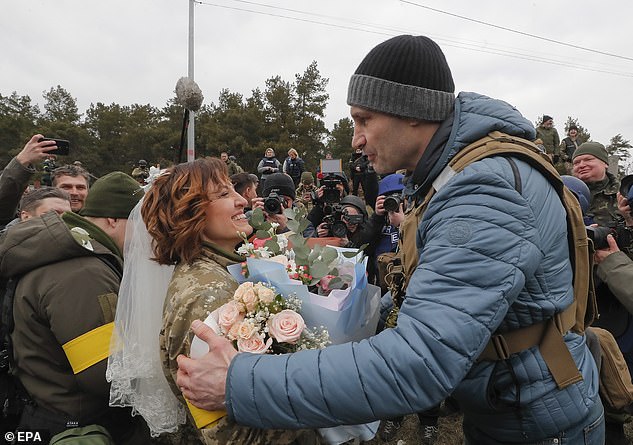 Vitali Klitschko paid a visit to a blockpost near Kyiv, to offer his well-wishes and blessings to two newlyweds in the territorial defence

Both the newlyweds were applauded and the bride looks to have swapped out her helmet for a white veil as she smiled and held Valeriy’s hand.

A group of fellow soldiers also joined in a chorus to the couple, with one man playing what appears to be a bandura, a Ukrainian folk musical instrument similar to a lute.

The footage was shared by Paul Ronzheimer, reporter for German news outlet BILD-Zeitung.

Brovary is a city in northern Ukraine, an eastern suburb of the country’s capital, Kyiv.

Here’s how YOU can help: Donate here to the Mail Force Ukraine Appeal

Readers of Mail Newspapers and MailOnline have always shown immense generosity at times of crisis.

Calling upon that human spirit, we are supporting a huge push to raise money for refugees from Ukraine.

For, surely, no one can fail to be moved by the heartbreaking images and stories of families – mostly women, children, the infirm and elderly – fleeing from the bombs and guns.

As this tally of misery increases over the coming days and months, these innocent victims of this conflict will require accommodation, schools and medical support.

Donations to the Mail Force Ukraine Appeal will be used to help charities and aid organisations providing such essential services.

In the name of charity and compassion, we urge all our readers to give swiftly and generously.

TO MAKE A DONATION ONLINE

To add Gift Aid to a donation – even one already made – complete an online form found here: mymail.co.uk/ukraine

Via bank transfer, please use these details:

TO MAKE A DONATION VIA CHEQUE

TO MAKE A DONATION FROM THE US

US readers can donate to the appeal via a bank transfer to Associated Newspapers or by sending checks to dailymail.com HQ at 51 Astor Place (9th floor), New York, NY 10003