“Here comes the bride…” — The famous words spoken by the one and only, Constance Hatchaway, who is also known as The Black Widow Bride.

Constance is one of the 999 Happy Haunts within Haunted Mansion, which is located in both Disneyland in California, and in Walt Disney World in Florida. But do you know her backstory? In this article, we are diving into everything we know about Constance Hatachway, including who she was, who she married, how she died, and more!

Constance Hatchaway, who is also known as The Black Widow Bride, is one of the 999 Happy Haunts within Haunted Mansion, which is located in both Disneyland in California, and in Walt Disney World in Florida.

According to Haunted Mansion Fandom, she is “arguably the most villainous and/or most dangerous presence on the ride, being the ghost of a bride with a murderous past life”.

Constance is actually a revamped version of the original bride character, who was introduced in 2006. Along with the revamped look of her character, the attic scene that she is located in was also redesigned to reflect not only the new look of Constance, but to showcase a much darker tone.

Constance Hatchaway is modeled after Julia Lee and she is voiced by Kat Cressida. 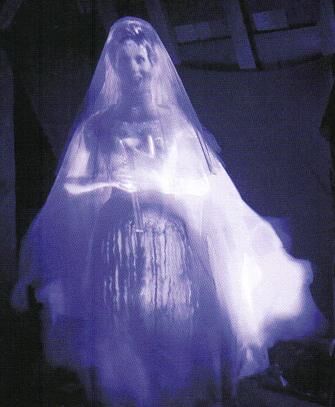 In regards to what she looked like prior to becoming a ghost, in the photos lying around the attic, you can see she was a beautiful woman with blonde hair and pale skin. As she grew older, you can see her hair turn gray and her posture became poor.

When Constance became a ghost, she gained a blue and opaque look as she wears her wedding dress and holds a hatchet.

Where can you find Constance Hatchaway? 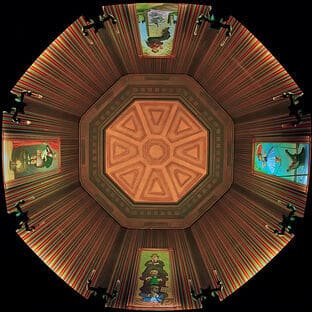 Constance Hatchaway is one of the 999 Happy Haunts within Haunted Mansion and can be found within the attic scene of the attraction located in both Disneyland in California and in Magic Kingdom at Walt Disney World in Florida.

But that’s not the only reference to Constance at Haunted Mansion. In fact, in the Walt Disney World version, as Guests enter the queue, they may notice a realistic-looking engagement ring embedded into the ground. This was put there by Disney Imagineers into the new queue after Guests noticed cut-off stanchion that resembled a diamond ring in the cement outside the Mansion. Many believed it belonged to the original Attic Bride, now known as Constance Hatchaway.

Additionally, according to many, Constance also appears as a portrait in the stretching room — the portrait that showcases an old woman sitting on a tombstone holding a red rose. As the stretching room, well, stretches, it is revealed that the old woman is sitting on top of the tombstone of her late husband George, whose bust she had plunged a hatchet into. Many speculate this to be Constance simply because of the variety of similarities, including the fact that George died from a hatchet. 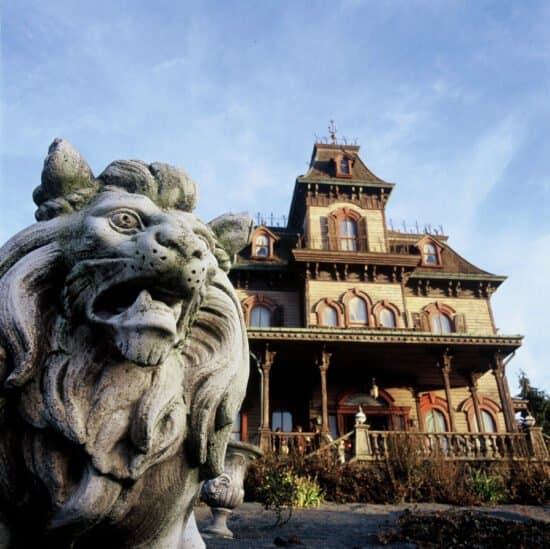 For those of you wondering if Constance Hatchaway appears in Phantom Manor in Disneyland Paris, the answer is no. Instead, this version of Haunted Mansion has a bride named Melanie Ravenswood and, according to reports, “serves as the counterpart to the Bride from a time before the Black Widow model was implemented in any park, possibly hinting that the role of the bride is intended to be one of tragedy to counter the Ghost Host’s role as a villain and Madame Leota’s role as a neutral figure”. 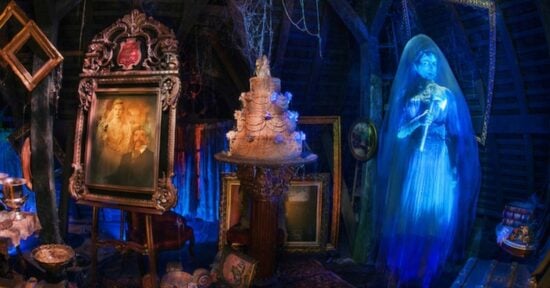 Constance Hatchaway is one of the most intriguing characters within the Haunted Mansion. Though many of the details of her backstory remain a mystery, what we do know is that she was a beautiful woman who sought out wealth and luxary. She married several rich men, including bankers and businessmen, and immediately murdered them after their wedding. (Til death do us part).

According to Haunted Mansion Fandom:

Constance Hatchaway was a beautiful woman who sought to obtain wealth and luxury. She accomplished this by marrying several rich men, including bankers, businessmen, farmers, and barons. However, each was murdered after the wedding by the deadly bride, decapitated with a hatchet so that she could claim their inheritance. Despite her crimes, she was never punished (likely due to lack of evidence), though the public did dub her “The Black Widow Bride”.

So who exactly were her husbands and what were their stories? Well, we know of the following characters, courtesy of Haunted Mansion Fandom:

Constance died of unknown causes, though many Haunted Mansion fans speculate it was of old age. After Constance passed away, her spirit became a permanent resident of the Haunted Mansion and she resides in the attic, where she can be seen standing next to her past wedding gifts, portraits of her dead husbands, and admitting to her crimes as Guests pass by.

Constance says many wedding-related lines including “Here comes the bride”, “As long as we both shall live”, “For better or for… worse”, “I do. I did”,  “In sickness and in… wealth”, “You may now kiss the bride, “We’ll live happily ever… after”, and, of course, “Till death… do us part…”. 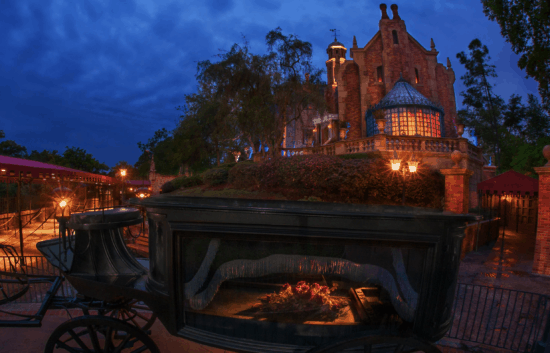 The spirited Haunted Mansion adventure is guided by the “disembodied voice of the Ghost Host” as he is your private tour guide “through the cadaverous realm of an eerie haunted estate, home to ghosts, ghouls and supernatural surprises.” Beware of hitchhiking ghosts!

Disney World describes this attraction as:

The disembodied voice of the Ghost Host is your private guide through the cadaverous realm of an eerie haunted estate, home to ghosts, ghouls and supernatural surprises.

Glide past a casket-filled conservatory, Madame Leota’s chilling séance room and a ghostly graveyard of singing specters as you attempt to find your way out. Beware of hitchhikers—these phantom pranksters may follow you home. 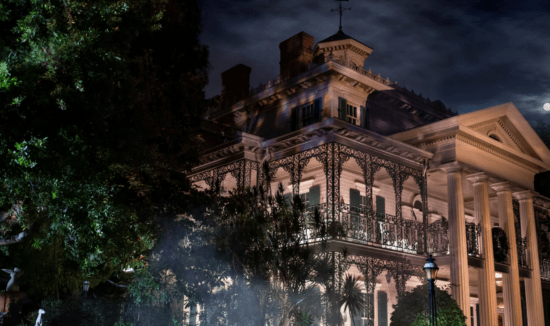 The official description of the Disneyland ride reads:

Dearly depart into a foreboding estate, drag your body to the dead center of the Portrait Chamber and watch as the walls begin to stretch before your eyes. Climb into your waiting Doom Buggy and embark on a shivering journey into an unearthly realm.

The disembodied voice of the Ghost Host is your private guide through the cadaverous dwelling—home to grinning ghosts and other spectral surprises.

Glide past a rattling casket in the conservatory. Head off to Madame Leota’s spooky séance room. Float by the Grand Ballroom and its waltzing apparitions. Take a spin through a cemetery where the spirited residents regale you with song.

Beware of lurking hitchhikers—these phantom pranksters may try to follow you home! 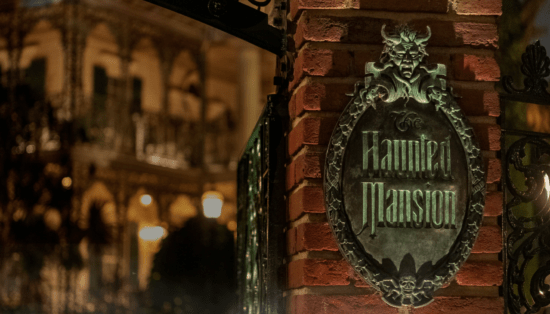 Ready to visit the Disney Parks and see Constance Hatchaway?

If you need help planning your next Walt Disney World or Disneyland vacation to see Constance Hatchaway at Haunted Mansion, the Authorized Planners at Academy Travel have you covered! Academy Travel has earned the highest designation that Disney can bestow upon a travel agency, EarMarked Diamond.

As long as you book your trip with an Authorized Disney Vacation Planner you can rest assured that you will be working with an agency that Disney has vetted and is willing to associate their brand with that agency due to the knowledge and service level you will find at that particular agency.

Ready to find out what your dream vacation will cost? Click here to get a free no-obligation quote.

Something Learned, Something Knew – My New Orleans

I did too many shots the night before my wedding