Pictures of the Queen’s final resting place alongside her late husband the Duke of Edinburgh have been revealed.

The black stone slab, which is new, has been set into the floor of the King George VI Memorial Chapel in Windsor Castle after replacing the old stone that had the names of the Queen’s parents, George VI and Elizabeth, inscribed in gold lettering.

WATCH: How the Queen’s funeral unfolded

Queen Elizabeth’s name and that of her ate husband Prince Philip are inscribed at the bottom, and in the centre is the star of Most Noble Order of the Garter, the most senior order of knighthood in the British honours system, outranked in precedence only by the Victoria Cross and the George Cross.

It is positioned between the Queen’s name and her mother’s name.

READ: The Princess of Wales holds Charlotte’s hand at the Queen’s funeral

The stone is made of hand-carved Belgian black marble with brass letter inlays, to match the previous ledger stone.

The wreaths on the floor surrounding the plaque are from the Queen’s family, and were displayed next to the coffin during the committal service at St George’s on 19 September. 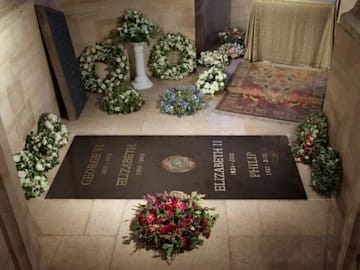 During the ceremony, King Charles laid the Queen’s Company Camp Colour of the Grenadier Guards on her coffin. As cameras showed the emotional moment, the wreaths were seen by viewers, many of which featured the final handwritten words that would be shared with Her Majesty.

Included among the wreaths was one from the Prince and Princess of Wales, which bore handwritten notes from the pair of them.

The wreath was made up of some of the Queen’s favourite flowers, and they were nestled close to where the Imperial Crown lay before it was removed from the coffin.

Many other royals left touching notes for Her Majesty, including her son, King Charles, who wrote: “In loving and devoted memory. Charles R.” 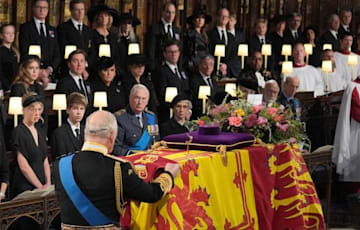 Charles is seen with the coffin during the committal service

The Queen’s funeral flowers at Westminster featured plenty of foliage including myrtle which was used in her 1953 wedding bouquet as is royal tradition.

English oak, which symbolises the strength of love, and weeping birch has also been incorporated in the state funeral displays.

The Queen’s funeral flowers and wreaths featured large white and green displays of blooms that mourners will have seen over the past week. These included Asiatic lilies, gladioli, alstroemeria, and Eustoma.

At the Queen’s state funeral, garden roses, autumnal hydrangea, sedum, dahlias and scabious were also on display and these are in shades of gold, pink and deep burgundy, with touches of white, to reflect the Royal Standard.