Sometimes when the weather becomes unbearably warm because it’s summer and the planet is on fire, you want a story to transport you to misty, murky moors or a driveway lined with old trees overgrown with Spanish moss. You want to disappear into a huge, dark house and the darker, untold stories that lurk there. You want something Gothic.

Classics like “Jane Eyre” and “The Tenant of Wildfell Hall” have been staples of my summers, but newer novels have taken up the Gothic mantle lately. If you like creepy literary hauntings, Chantal James’ “None But the Righteous” or Emma Seckel’s forthcoming “The Wild Hunt” are here for your every eerie desire.

RELATED: V.C. Andrews felt she had “prophetic powers”: Longtime ghostwriter on “Flowers in the Attic” author

Like a rambling manor home with multiple rooms, there is much to discuss in this limited series. What will the televised tale do with prolific ghostwriter Andrew Neiderman’s prequel novel? What is up with Max Irons’ accent? And what are the most Gothic touches? That last one is going to be difficult to cap, but in a story where the melodrama is as natural as breathing, we have a few worthy contenders.

All good Gothic tales need an imposing house. It’s gotta be big. It’s gotta be old. And it’s gotta be somewhere remote — all the better for the heroine to not be able to run, my dear. Foxworth Hall reporting for duty! The grand, stately manor home has rather seen better days (haven’t we all?) but it sits on over a 100 humid acres in then-rural Virginia, has been the Foxworth family stronghold for generations and has sinister origins: it was a cotton plantation.

A big part of the “Flowers in the Attic” story hinges on secret rooms, so you know it has them. We also have high ceilings, curved oak staircases, disapproving oil paintings. Don’t forget the trophy room with dead animals, the echoey and disused ballroom, the hidden office, the library that isn’t really for our Belle-ish heroine and the rooms after rooms filled with stuffy antique furnishing.

“Flowers in the Attic: The Origin” takes it one primly heeled step further: there’s no electricity in the house. Why? Well, patriarch Malcolm Foxworth (Irons) likes it that way, OK? And Daddy gets what Daddy wants. Greasy lamplights and candles flicker dangerously close to actors’ hair, and the lack of electricity understandably makes the story feel older, timeless or stuck forever in the oil painting past, crushed by its own weight.

Like the Chupacabra, its eyes glow red, possibly when it’s about to feed.

One decorative aspect of the series deserves its own category: the swan bed. Devastatingly, no promotional photos of this bed have been released so you’re going to have to Google it. But Google it you must! (Or better yet, tune in.)

If you remember the swan boats in carnival tunnel of love rides or for rent in fancy city ponds, the swan bed is like that, but a bed. And its Malcolm’s mother’s bed, festooned in the place of honor in her preserved, teen dream of a bedroom: all pink and ruffles. If Foxworth Hall had electricity, surely there would be a princess phone in here.

The swan bed is not going to be the site of anything good. Like a sleigh bed but with a water fowl encircling the mattress, like a giant replica of Bjork’s greatest costume come to (furniture) life and holding a lumpy queen size, the head of the swan looks down, regarding the proceedings coolly. Like the Chupacabra, its eyes glow red, possibly when it’s about to feed. 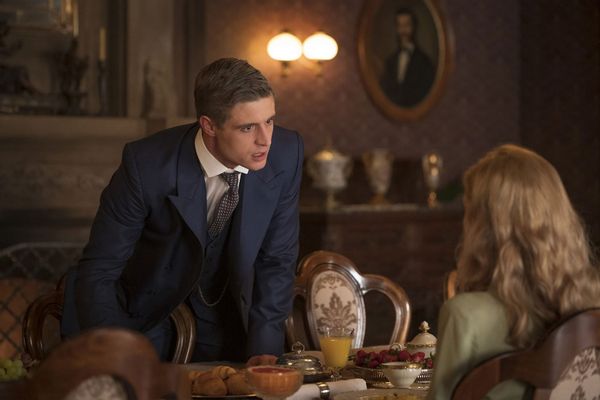 Is he southern? British? No matter! The manor is the most important thing, as is keeping up appearances and keeping everyone firmly in the haunted past.

Gothic stories tend to have what is known as a “burdened male protagonist.” Life is so hard when you’re rich and you’ve inherited a stately mansion! You’re dashing and suave and everything fell into your lap, but you’ve gotta mind your history, keep the residents (including your family and those pesky servants) in line and secure your legacy.

The brooding Malcolm struggles under the weight of this, as Irons does with his accent. Is he southern? British? No matter! The manor is the most important thing, as is keeping up appearances and keeping everyone firmly in the haunted past.

This is her villain origin story. No surprise: it involves a man.

Many Gothic tales have a ghost or monster, and while the servants will certainly start talking once they hear rustling in the attic, Malcolm is our only real demon here so far (our only ghost: the idea of his mother). He’s plenty demonic, turning into a raging tyrant shortly after his wedding. Abusers tend to do that, but Malcolm doesn’t even wait until after the honeymoon to show his true, rotted self (there will be no honeymoon). The littlest detail can send him off into a rage. Not wire hangers, but hydrangeas! 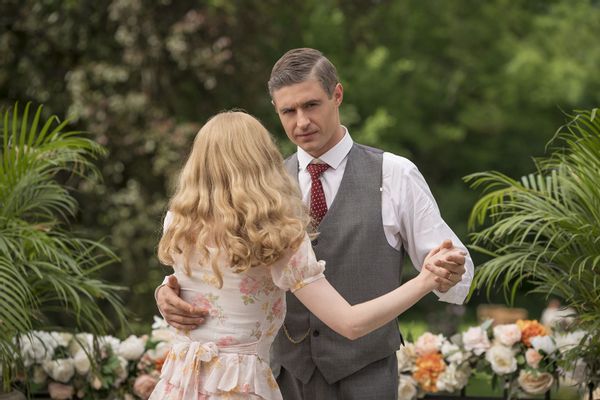 Flowers in the Attic: The Origin (A+E/Lifetime)We know it’s going to happen in this story. It’s not funny and it’s certainly everywhere in the “Flowers in the Attic” franchise. It seems impossible, but the series manages to make the story even more incestuous perhaps, slightly tweaking the relations to make them even more related, from the original text. The knowledge of the terrible events coming weigh heavy over the story, tinting everything in queasy expectation.

The damsel in distress

All stories need a heroine, and in Gothic ones, she’s often in distress. Olivia (Jemima Rooper) doesn’t start out that way. She’s a little older. She’s super bright, practical and excellent at her job, working in business as her father’s partner, his equal. Her new husband will certainly put a stop to that. 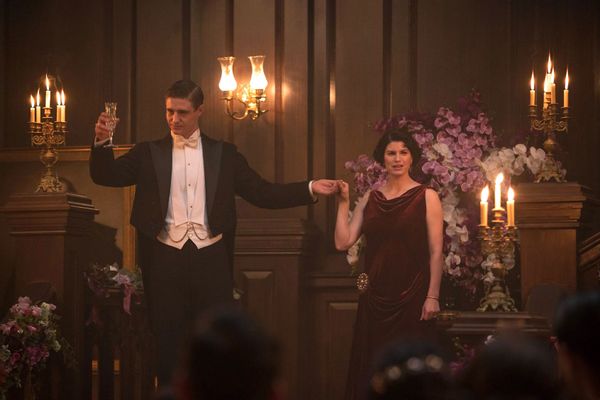 Max Irons as Malcolm Foxworth and Jemima Rooper as Olivia Winfield Foxworth in “Flowers in the Attic: ﻿The Origin” (A+E/Lifetime)Nothing dims a bright heroine quite like disappointing life circumstances. But Olivia’s circumstances are that of animal in a steel trap that keeps closing tighter and tighter. Her distress is all the more distressing because of the way it happens: slowly, like the erosion of an ancient, unmaintained house. Her husband breaks her one weird rule (no makeup!), one surprising flare-up (not that dress, you hussy!) at a time.

This is her villain origin story. No surprise: it involves a man. 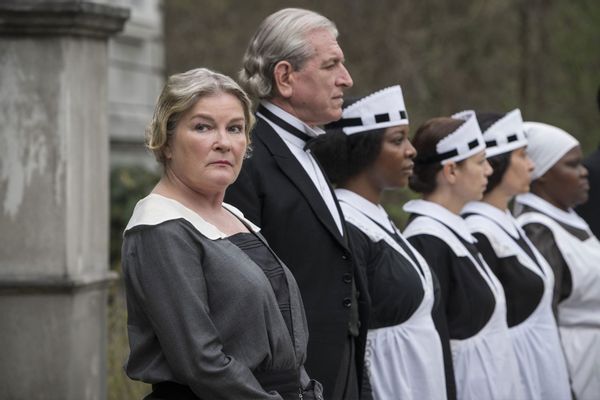 Who greets Mary Lennox when she arrives, destitute, on the moors? No one else but “The Secret Garden’s” severe housekeeper, an essential element of Gothic tales. In Daphne du Maurier’s “Rebecca” we have Mrs. Danvers. Do they come standard with the isolated manor house, or . . .?

The severe housekeeper of Foxworth is Mrs. Steiner, played expertly by Kate Mulgrew (you may know her as Captain Kathryn Janeway on “Star Trek: Voyager”). Her hair’s in a bun, her apron’s tightly knotted around her spotless gray uniform, she has all the keys and a frown is etched on her face. She disapproves. She clucks. She knows. She knows this house. She knows this family. She tries to warn Olivia — or is she trying to sabotage her?

What good is a Gothic house in the middle of nowhere if it doesn’t imprison somebody? Or, lots of somebodies?

“Flowers in the Attic: The Origins” has double the housekeeper joy with the lovely T’Shan Williams as Nella, the younger, kinder staff member who truly extends friendship to Olivia. Severe Mrs. Steiner’s not gonna like that. It’s her house, don’t you know?

What good is a Gothic house in the middle of nowhere if it doesn’t imprison somebody? Or, lots of somebodies? In “Jane Eyre,” it was Bertha who rattled the attic. In “Flowers in the Attic: The Origin,” we know it’s eventually going to be flowers. And the flowers are young people, children (an idea that came to V.C. Andrews in a dream).

Want a daily wrap-up of all the news and commentary Salon has to offer? Subscribe to our morning newsletter, Crash Course.

But even before that, we watch Olivia lose herself in a house, lose herself to the house, and the icky history entwined with it like ivy creeping up the brick sides. Evasive and everywhere, the past imprisons Olivia as good old Gothic stories tend to wrap their tentacles around and ensnare us.

And we’re all prisoners of the swan bed. Please don’t kill us, swan bed.

“Flowers in the Attic: The Origin” continues with new episodes Saturdays at 8 p.m. on Lifetime.