With two end-of-the-year parties to prepare for that weekend, the catering and private chef business was abuzz as kitchen staff sliced, diced and arranged colorful trays of comforting dishes.

But after feeding Northern Colorado wedding and event guests for seven years, Juli y Juan’s Kitchen has something else exciting to prepare for — the reopening of its long-awaited brick-and-mortar restaurant in Fort Collins.

Juli y Juan’s Kitchen briefly opened a restaurant out of its West Elizabeth Street catering kitchen this spring but had to pause those plans due to a busy catering season, according to Juan Andres Rodriguez, who brought Juli y Juan’s Kitchen to Fort Collins with his wife and business partner, Juliana Trujillo, in 2015.

Now the couple’s restaurant is making a comeback with plans to reopen Jan. 4.

“We’ve had a lot of people from our weddings and events asking where else they could try our food,” Rodriguez told the Coloradoan, joking that the forthcoming restaurant will help discourage any wedding crashing.

Trujillo and Rodriguez’s plans to open a restaurant in the city went into overdrive when the COVID-19 pandemic hampered their 2020 wedding season. They catered about three or four weddings that year instead of their customary 60 to 80, Trujillo estimated.

With the help of Rodriguez’s brother, Roberto, Juli y Juan’s Kitchen moved into a space at 1232 W. Elizabeth St., building it out to be able to serve as both a catering kitchen and takeout restaurant spot. The space was previously home to Honolulu Poke Bar, Rodriguez said.

After the restaurant’s two-month stint this spring, the planned Jan. 4 reopening will mark a more permanent chapter for the catering business’s brick-and-mortar arm.

The restaurant will serve dinner Tuesdays through Fridays, from 4 to 7:30 p.m. Its menu will feature comfort foods with a Latin twist, particularly using influences from Colombia, where Trujillo is from, and Mexico, where Rodriguez grew up and the pair met.

Diners can take a mix-and-match approach, building family-style meals from a slate of different proteins — everything from chicken cutlets to cod — as well as sides like mashed potatoes, grits and polenta and a range of sauces. They can also try street foods, weekly specials and an array of desserts prepared by Juli y Juan’s Kitchen’s pastry chef. 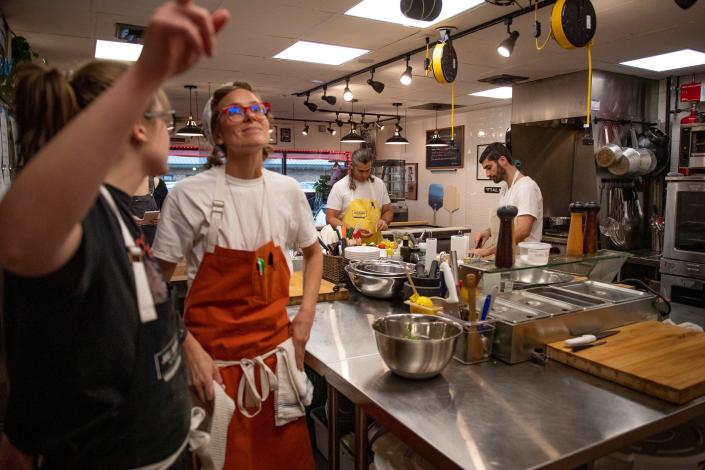 Juliana Trujillo, second from left, works with her staff at Juli y Juan’s Kitchen on Dec. 9.

Orders will be packaged in food boxes or, as Rodriguez and Trujillo call them, “little boxes of love.”

“There’s just not enough love in (takeout food),” Rodriguez said, adding that the mission of the couple’s restaurant is to give diners an option for hearty, whole foods that taste as great out of a takeout box as they would on a fancy dine-in table.

While Juli y Juan’s Kitchen will continue catering events and weddings, they do plan to pare down their catering jobs as the restaurant gets going, Trujillo and Rodriguez said.

“We’re looking to cook more and plan less,” Rodriguez said. “… Instead of catering weddings, we’d like to cater the community.”

Hours: Juli y Juan’s Kitchen will open for takeout and delivery on Jan. 4. Its hours will be 4-7:30 p.m. Tuesday through Friday. 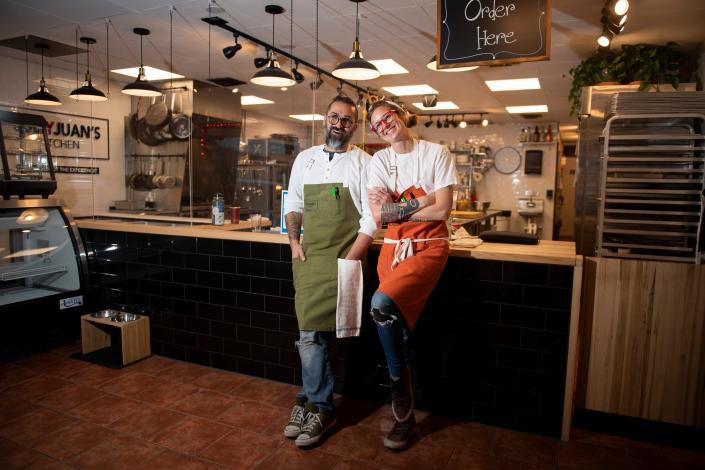 Juliana Trujillo and Juan Andres Rodriguez, owners of Juli y Juan’s Kitchen, are pictured at their restaurant and catering kitchen at 1232 West Elizabeth Street on Dec. 9.

Erin Udell reports on news, culture, history and more for the Coloradoan. Contact her at ErinUdell@coloradoan.com. The only way she can keep doing what she does is with your support. If you subscribe, thank you. If not, sign up for a digital subscription to the Coloradoan today.