Shannon Evans packed her honeymoon suitcase with the essentials — her wedding dress and her Winnipeg Blue Bombers swag.

“We bought jerseys that say ‘just married’ on the back of them, and underneath my jersey, I am wearing a wedding dress.” she said.

Ken Hardman and Shannon Evans just before walking down the aisle on their wedding day on Saturday. The couple will fly to the Grey Cup final just hours after their reception wraps up. (Supplied by Shannon Evans)

Evans is marrying Ken Hardman on Saturday in Winnipeg. Hours after their reception ends, the Winnipeg couple will jet down to Hamilton, Ont., to watch their CFL team defend their Grey Cup championship title.

The couple booked their wedding day before the Grey Cup game date was announced. As the Bombers rose in the CFL ranks through the season, they decided to spend their honeymoon in Steeltown with extended family — fellow Bombers fans.

“We’re the best team in the CFL. We have the best fans,” said Hardman. “It’s just a recipe for a great day right after our wedding.”

Thousands of fans have been partying in Hamilton for days. Grey Cup events are scaled down due to COVID-19 protocols, but superfans from all CFL teams are taking it in stride, reuniting with friends they only see during the championship weekend.

“You see the same people over and over again,” said Hans Stasiuk, who made the trip from Portage la Prairie. “It’s at the point where I know so many people, I could go by myself.” 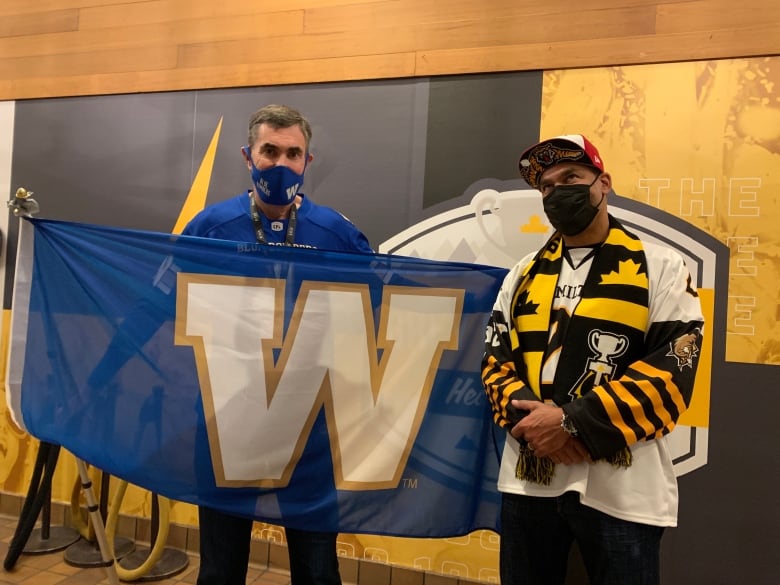 Stasiuk is hitting up as many Grey Cup events as he can with his friend Jan Chithalen, a Hamilton fan and the Ticats staff dentist.

“We were pretty confident going into the 2019 Grey Cup and we had our butts handed to us. So I think there’s a level of payback,” said Chithalen.

“I think Saskatchewan showed Winnipeg definitely has some weaknesses. Our coaches are smart. Our players are smart. It’ll just be another day at the office.”

But what do you do when your team isn’t in the final? Roughrider fan Lesley-Anne Gough had a tough decision to make. 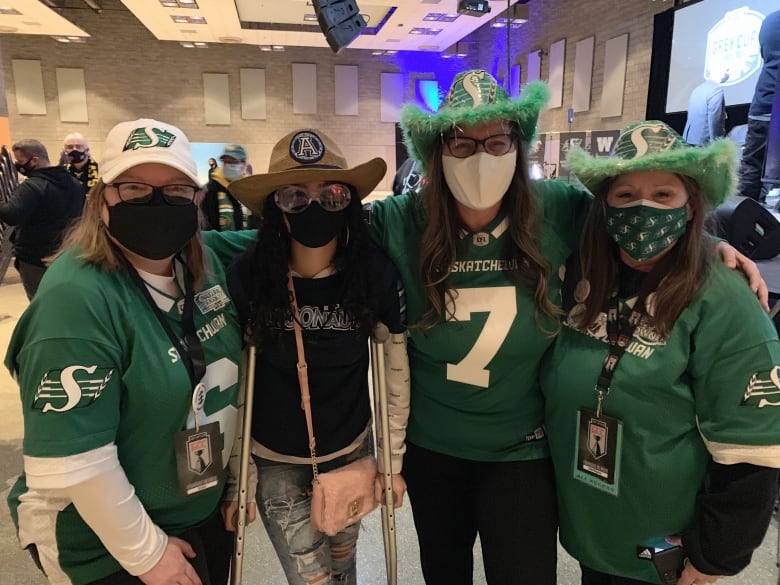 Lesley-Anne Gough (second from right) is cheering for the Bombers Sunday — and only Sunday. The Roughriders fan is at the Grey Cup with Sue Bates (left), her daughter Semanda Gough and Arlene Monguvius (right). (Sam Samson/CBC)

“I always cheer for the Riders, but I am a season ticket holder for the Argos because I do live out here. They’re my second favourite team,” she said from under her Roughriders cowboy hat.

“I have a little piece of my heart for the Bombers. A little bit.”

Back in Winnipeg, newlyweds Evans and Hardman are ready for a weekend of partying with both their biological families and their CFL family.

“I’m just looking forward to being husband and wife,” said Evans. “The Grey Cup is going to be icing on the cake.”