It was the bride of Prank-enstein.

A California groom was left in stitches over an uproarious gag in which his best friend trolled him by masquerading as the bride at his wedding. A clip of the epic nuptial punking currently boasts over 588,000 views on TikTok.

“I don’t get embarrassed, thankfully,” Riverside’s Stephen Garlatta, 26, told Jam Press of the prank, which occurred after he tied the knot with wife Lauren Bartoli, 25, in April 2022.

The car salesman’s best friend, Austin Kuentz, had decided to spring the spousal switcheroo during the traditional removing of the bridal garter. According to Garlatta, his buddy and his betrothed had been planning the matrimonial Rickroll for a month.

The resulting 1-minute clip shows the groom sitting blindfolded in a chair while, unbeknownst to him, his best bud Kuentz prances about in front of him in a bridal gown. Meanwhile, Garlatta’s bride-to-be Bartoli, a barber, is seen standing on the side, waiting for the hilarity to ensue.

All of a sudden, Kuentz rolls up the dress to reveal his garter, whereupon Bartoli guides her oblivious future husband’s hand to his leg. After touching what he thinks is his paramour, Garlatta uses his teeth to slip the garter off his cheeky pal’s leg while the crowd goes wild.

A blindfolded California groom was punked by his best friend, who dressed up as the bride for the traditional garter removal during the couple’s wedding reception. Jam Press Vid/@stephengarlatta1 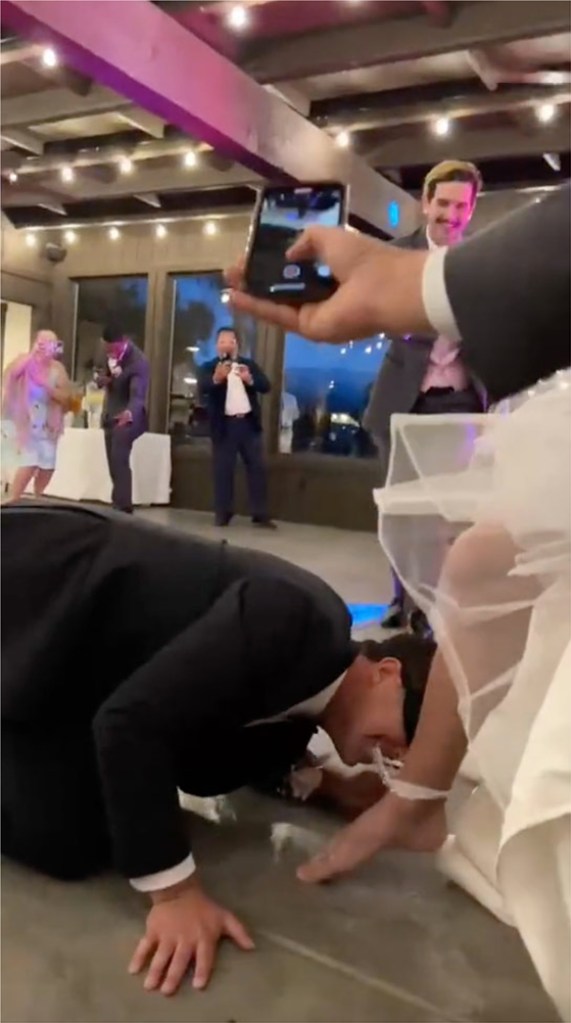 Upon hearing laughter, the groom removes the blindfold and then he realizes he’s been had and collapses into a fit of laughter. The clip concludes with Garlatta embracing the cosplaying prankster as onlookers erupt into cheers.

Garlatta painted the side-splitting scene. “She [Lauren] said, ‘Put the blind on and sit there.’ I was confused and didn’t know what was going on,” the groom recalled. “She originally told me she didn’t want to do the garter toss cause she’s shy, so I said, ‘If you don’t want, you don’t have to.’”

Which led to the groom’s shock at the reception.

“I felt the dress moving next to me and was like, ‘Dang! She’s getting into it!’” he said.

When asked how couldn’t tell that the bride wasn’t Bartoli, Garlatta chalked it up to being a tad tipsy. He also learned later that Kuentz had spent “20 minutes” shaving his leg in preparation for the prank. 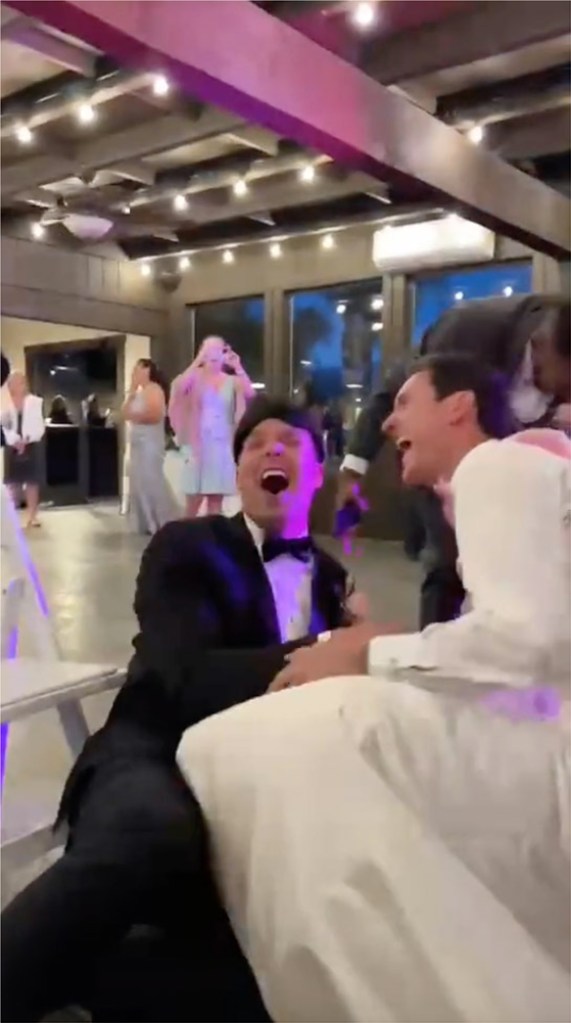 Fortunately, the groom is taking the gag in stride.

“My first thought was, ‘OMG this is great!’” he said. “I know everyone thought it was funny.”

TikTok was also in stitches over the matrimonial masquerade, with one commenter exclaiming, “The look on his face.”

“Close asf friends,” said another. “He didn’t get mad he started crying in laughter.”

One fan exclaimed, “That dress looks so good on him!!!!” 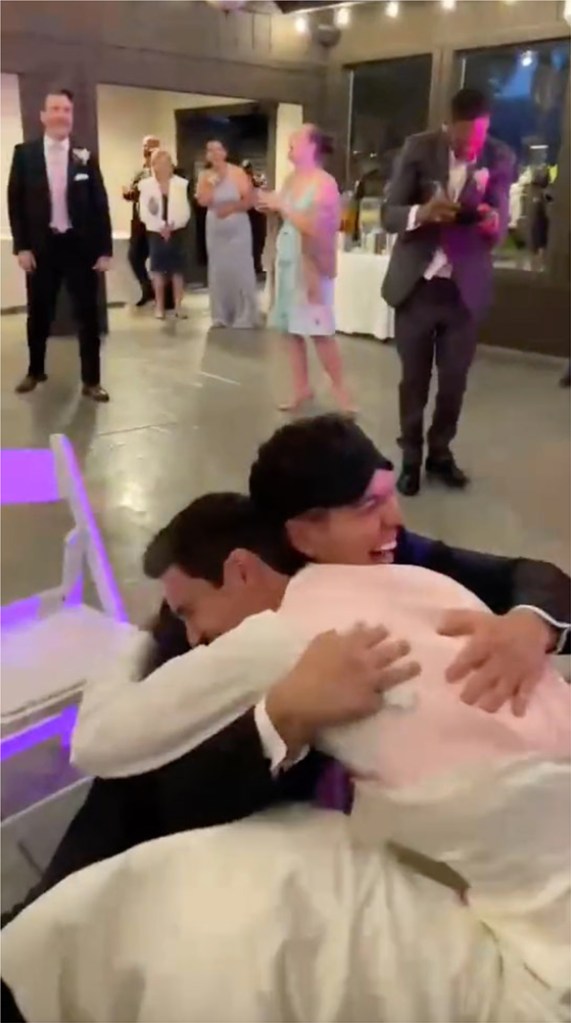 Apparently, the marital leg-pulling marks the latest escalation in an ongoing prank war between Garlatta and his other half. “I prank her [Lauren] all the time, so I think this might have been her revenge prank,” he said, vowing, “I will be getting her back.”

In a far less successful wedding stunt in April, a woman accidentally torpedoed her sister’s big day by yelling “I object!” in jest during the knot-tying ceremony. 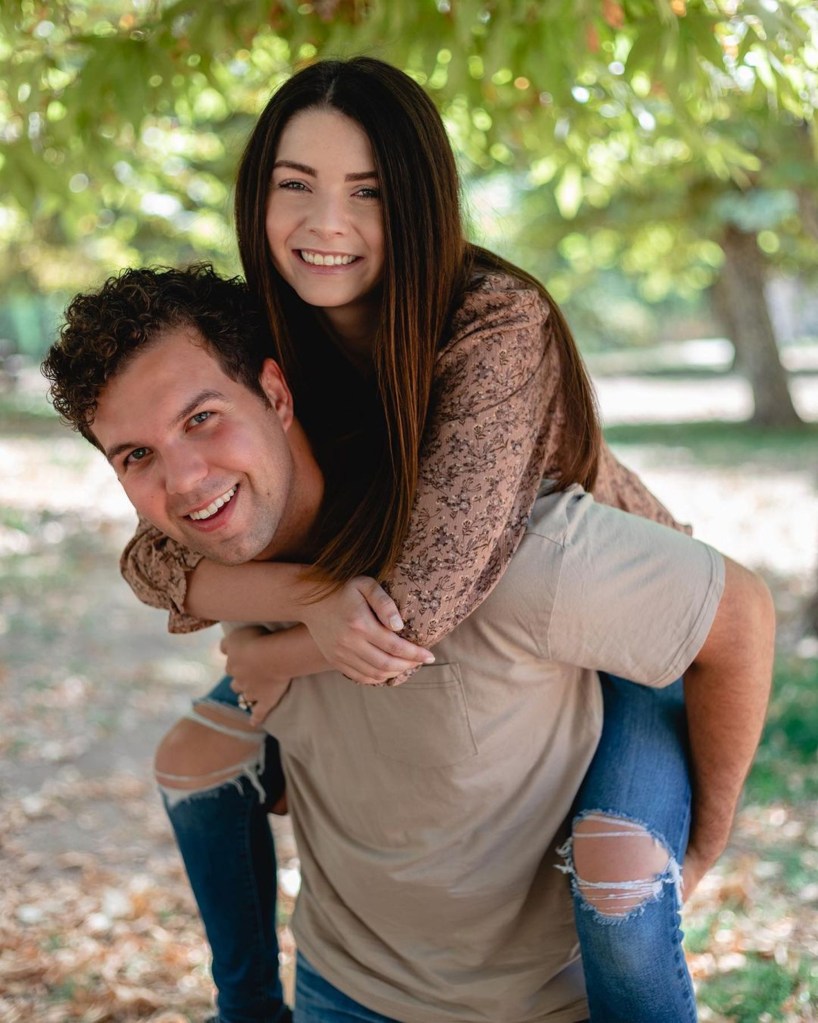