Good wedding? Guests in China brave freezing conditions as they sit outside in heavy SNOW to eat a post-wedding celebration meal

By Mark Tovey For Mailonline

This is the bone-chilling moment guests at a post-wedding celebration meal in north-central China were forced to endure sub-zero temperatures.

The video, captured in Pingliang in Gansu Province on December 25, shows the dinner unfolding against a backdrop of white.

As snow keeps falling around them, the guests try to enjoy the wedding reception dinner. 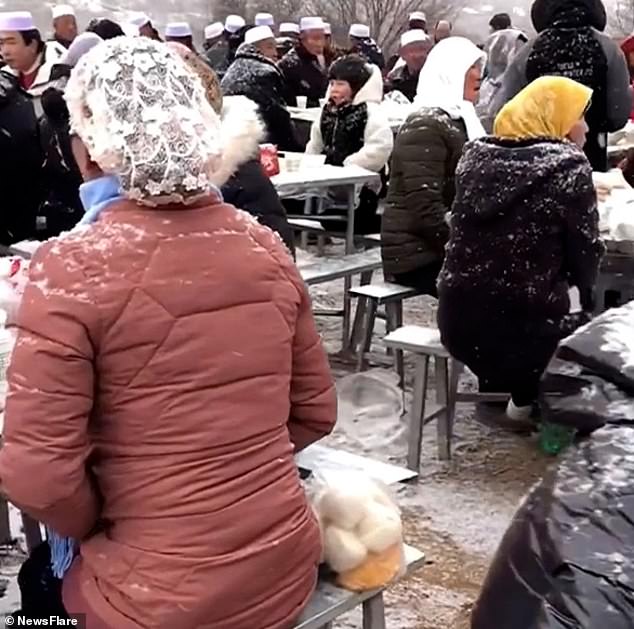 According to one guest, the happy couple could not reschedule the event, having booked it a long way in advance – but the sub-zero temperatures didn’t stop the attendees from enjoying the al fresco reception, during which they sat on picnic benches and ate together

Men, women and children can be seen chatting – wrapped up in coats, scarves and hats to guard against the wintry weather.

According to one guest, named only as Mrs Ma, the wedding was booked in advance and it was impossible to reschedule the event.

Despite the cold, the happy couple’s guests put a brave face on the event, sat in small groups and enjoying their food in a jovial and festive atmosphere. Temperatures in Pingliang, Gansu Province, are forecast to fall as low as -16°C by the end of December 2021

The forecast for Pingliang shows even more extreme lows of -16°C predicted for the end of December and the beginning of January.

Traditionally, the bride in a Chinese wedding will wear the colour red, which symbolises good fortune and joy.