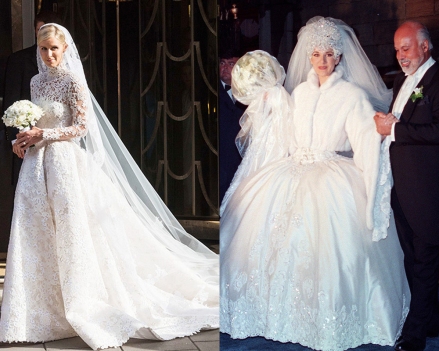 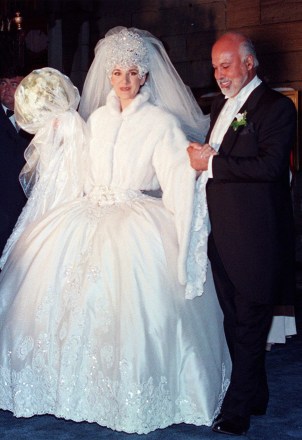 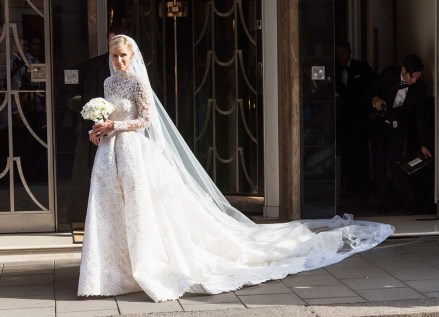 Here comes THE bride! Jennifer Lopez, 52, is famous for her many turns as a blushing wife-to-be. And she’s been one in real life, too. The stunning singer and actress was married to Ojani Noa in 1997, and she stunned in a classic white column dress for their ceremony. They parted ways in 1998, but Jennifer went on to marry Chris Judd on September 29, 2001, rocking a gorgeous, plunging lace gown for the Calabasas, California event. After ending the relationship in 2003, the “Jenny From the Block” songstress then married Marc Anthony in Beverly Hills on June 5, 2004, wearing a strapless Vera Wang gown. The couple welcomed children Max and Emme, now 14, on February 22, 2008.

“I still believe in happily ever after, for sure, 100 percent,” Jennifer told Today while speaking to them in November. And she proved it when she tied the knot in Vegas on July 16 with old flame Ben Affleck. Speculation surrounding her dress reached fever pitch when J.Lo revealed she wore a dress from an “old movie” for the ceremony. “So with the best witnesses you could ever imagine, a dress from an old movie and a jacket from Ben’s closet, we read our own vows in the little chapel and gave one another the rings we’ll wear for the rest of our lives,” she said in a newsletter following the wedding.

So here is our deep dive into the iconic wedding dressed Jennifer has worn in film throughout the years.

Jennifer Lopez’s Engagement Rings: Photos Of Her 6 Rings, Including Her Green Diamond From Ben Affleck 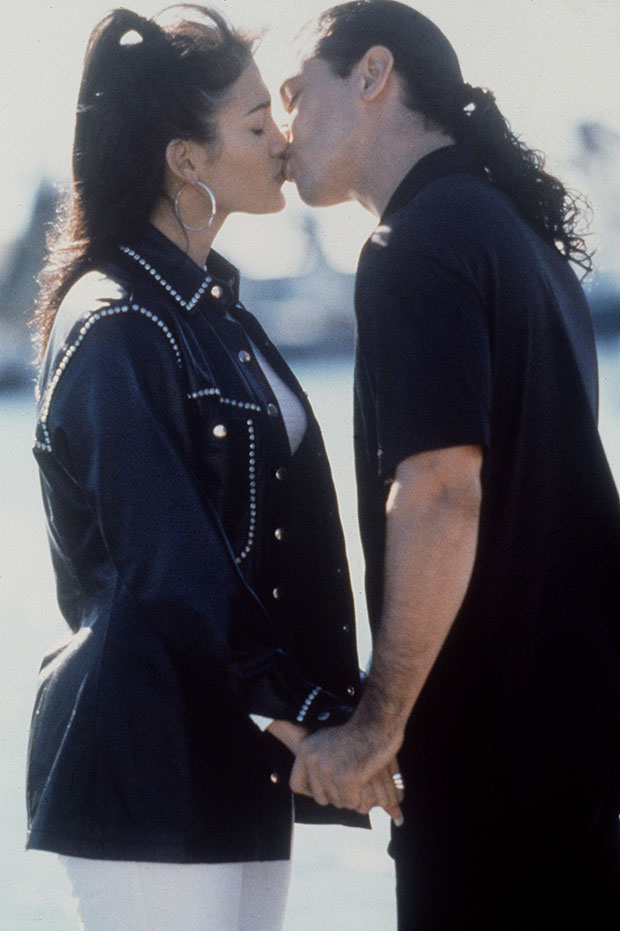 Jennifer wore a white outfit during a sweet engagement scene in the biopic, based on the life of the legendary Selena Quintanilla. She filmed the sweet interaction opposite Jon Seda, who played Selena’s real life husband Chris Perez. While it’s not a wedding gown, we consider it among her many iconic wedding-themed looks. 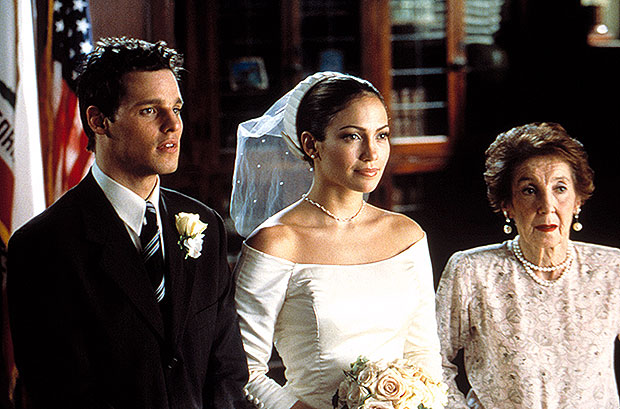 Jennifer Lopez and Justin Chambers appear in a scene from ‘The Wedding Planner.’ (Everett Collection)

J.Lo’s next appearance as an onscreen bride was even more memorable. In 2001 romcom The Wedding Planner, in which she co-starred with Matthew McConaughey, Jen wore a stunning boatneck gown with a pillbox hat and veil for a courthouse wedding scene. The dress generated recent buzz when it was compared to Meghan Markle‘s 2018 gown for her lavish wedding to Prince Harry.

Halsey’s Tattoos: Everything To Know About Their Ink 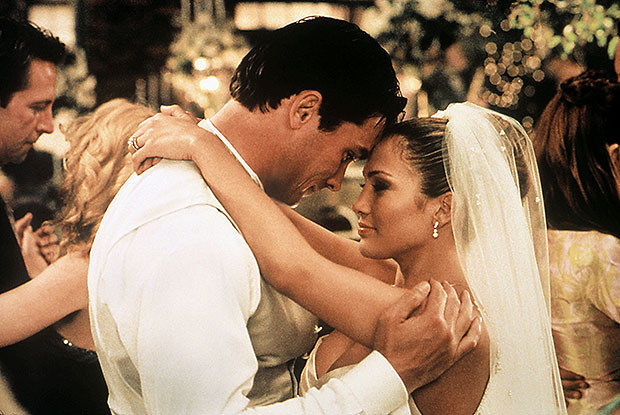 The beautiful actress stunned once again in a tulle gown with a sweetheart neckline and beaded straps for the opening scene of the 2002 thriller, co-starring Billy Campbell. She paired the look with a beautiful veil and delicate dangly earrings.

Okay, so, it’s not actually a wedding dress, per se — but we say J.Lo’s jaw-dropping pink chiffon gown and diamond necklace from 2002 romcom Maid in Manhattan should have been her second movie wedding gown from 2002. She starred in the film with Ralph Fiennes.

Director Kevin Smith reportedly filmed a wedding scene from this tear-jerker of a romcom starring Ben and Jen in their early days. However, after they broke up, he reportedly cut the scene, saying he didn’t know if it was “right” to leave it in. Too bad he didn’t know they’d ultimately end up married almost two decades later! 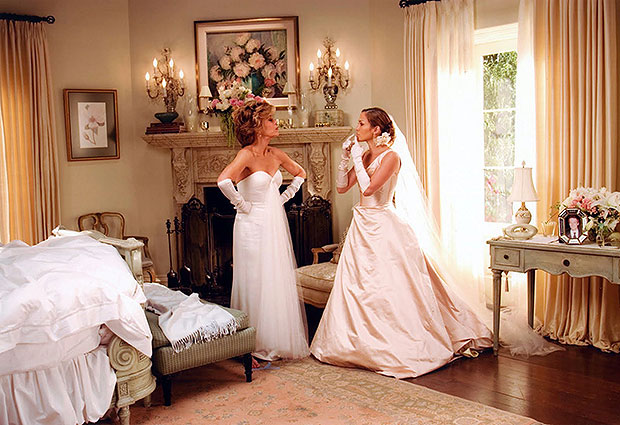 The fangs came out a year later in 2005, as Jennifer and Jane Fonda faced off over her on-screen fiancé, played by Michael Vartan.  J.Lo wore a sweeping cream colored, ballgown style wedding dress paired with satin gloves and a cathedral veil.

The Halftime actress took a page out of her own life at the time when she married real-life husband Marc Anthony in this 2006 film about the life of Héctor Lavoe, played by Marc. Jennifer played his wife, Nilda “Puchi” Lavoe. Jennifer wore a sweet, long-sleeved sixties style dress with a lace bodice in the film. 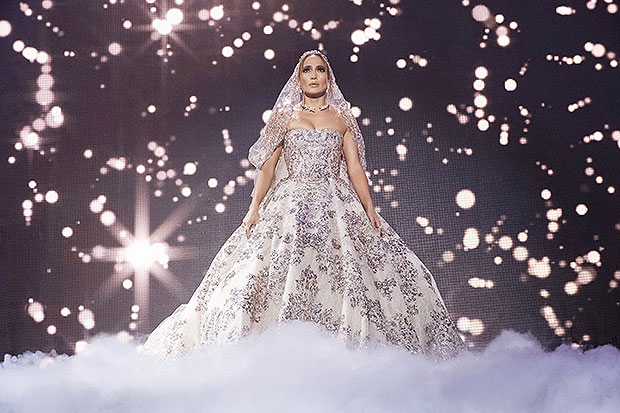 Jennifer’s positively jaw-dropping show-stopper of a gown from Marry Me with Owen Wilson is definitely her most dramatic wedding look. Zuhair Murad‘s silver-detailed taffeta, crystal, and lace dress reportedly weighed nearly a hundred pounds, per Variety.

If you can believe it, Jen has yet another bridal-themed movie coming out this year, though it hasn’t yet been released. Today reports that J.Lo  appears in an exotic destination wedding scene rocking a pretty disheveled bridal look, along with a floral crown. Josh Duhamel also appears in the scene, wearing a pretty messed up white jacket. You can see the photo here.