New York City has been filled with NFTs this week. Since Monday, hundreds, if not thousands, of people have darted between talks, galleries, hangouts, parties, and other events assembled for and by the usually all-online NFT community to talk about the future of art, hype the space, and discover new and potentially soon-to-be-explosive projects. The result has been an exceptional number of hours spent in Times Square, one surprise Strokes concert, and a lot of dudes wearing crypto merch.

Capping it all off was a two-part event on Thursday called Dreamverse, hosted at the expansive music venue Terminal 5. The venue is tucked in between the car dealerships and wedding dress shops that inexplicably line the western edge of Manhattan beneath Central Park. For most of the afternoon, the event transformed Terminal 5 into a digital art gallery, showcasing rising NFT artists. Like Cinderella, it turned back into a nightclub in the evening, drawing in crowds with a headline performance by Alesso, a popular Swedish DJ, and what the event planners’ promised would be the “inaugural showcase” of Beeple’s $69 million NFT.

Very much like a normal art gallery, except filled with TVs and dudes wearing WAGMI hoodies

I skipped out on most of the week’s programming but felt compelled to find out what it meant to see the so-called “authorized” debut of a work that I have already seen many, many times online and can download in 21,069 x 21,069 resolution whenever I’d like (the file is a browser-breaking 319MB large). I was also, conveniently, assigned to cover the event after I mentioned it in a meeting this week. Our editor-in-chief asked me to report back on the party, so I trekked up to Terminal 5 not once but twice to check it out. (The gallery and subsequent party / unveiling were separated by a 4-hour gap, during which I ate a burrito and watched YouTube videos in The Verge’s office.)

The gallery itself was very much like a normal art gallery, except filled with TVs and dudes wearing WAGMI hoodies. For all the discussions around what NFTs mean for art, it turns out they mean very little so far for displaying art to the public. Dozens of pieces were on display around the venue, rotating in and out on the many TVs that had been mounted throughout the space to present the entirely digital works. Some were animated; some were still. But mostly, it was a space to showcase a style of art that’s popular online — glossy, with a sci-fi edge and occasional grotesque element — but wouldn’t show up in a traditional gallery.

At the center of the Dreamverse gallery was a series of TVs mounted on color-changing tubes of light.

The event was put together by Metapurse, the group behind the $69 million acquisition of a Beeple NFT back in March, and the art they curated largely felt like works that could live within the same world as Beeple. One piece, from Pussy Riot, showed a man / pig hybrid crawling toward a grave with a large vaginal opening. Another work showed a figure in a Guy Fawkes mask holding a glowing bitcoin. The artworks were labeled with QR codes, which all seemed to direct to Twitter accounts rather than a blockchain address or NFT marketplace.

Everyone thought everyone else was more into NFTs than they were

The venue contained three floors of this — occasional series of TVs, glowing tubes of light for decor, and a VR installation in one spot, in which you could walk through a virtual NFT gallery inside this real NFT gallery — plus a roof space on top where, most notably, there was sunlight, and smoking was allowed.

When I wandered up to the roof, I found a bunch of people crowded around a man holding what appeared to be a deck of tarot cards. People gaped, and cameras pushed in as he showed off a single card as part of what I assumed was some sort of magic trick.

“Do you know who this guy is?” asked a man next to me. Neither of us knew who he was. He turned out to be Twobadour, one of the managers of Metapurse and a central figure of the event.

There were lots of small confusions like this. So many of the people I talked to told me they were interested in NFTs, but they weren’t as into it as the other people there — or, at least, the NFT fiends we all imagined were around us. These gallery-goers weren’t holding the Blue Chip NFTs. They couldn’t recognize Twobadour or Metakovan, the two Metapurse leaders. (Although a line of several dozen people formed at one point to take selfies with Beeple, who was neatly dressed in a blue sweater over a white oxford.)

One person I spoke to, who told me he’s more into Bitcoin than NFTs, said he was skeptical of NFTs’ value but came because he wanted to see what a digital art gallery looked like. As I left, he followed after me to make a suggestion for my article, imploring me to “put in something about the emperor’s new clothes.”

“It’s crazy, bro, we live in a fucking video game.”

When I came back around 8PM for the party and Beeple unveiling, many of the art displays had vanished, and the venue was getting packed. There were a bunch of guys in Bored Ape Yacht Club hoodies, someone walking around in a space suit, and an inordinate number of women wearing berets.

One guy wearing a Bored Ape hoodie told me the Dreamverse event was too expensive, and another NFT party was more popping. He didn’t own an ape, but he got invited as a plus-one to the Bored Ape party the night before, where Aziz Ansari came on stage to introduce a performance by Beck. After that, Chris Rock came on stage to introduce a performance by The Strokes. Ah, I think, so these people own hundreds of thousands of dollars worth of NFTs that they refuse to sell and get to see my favorite band play for free? How lovely. 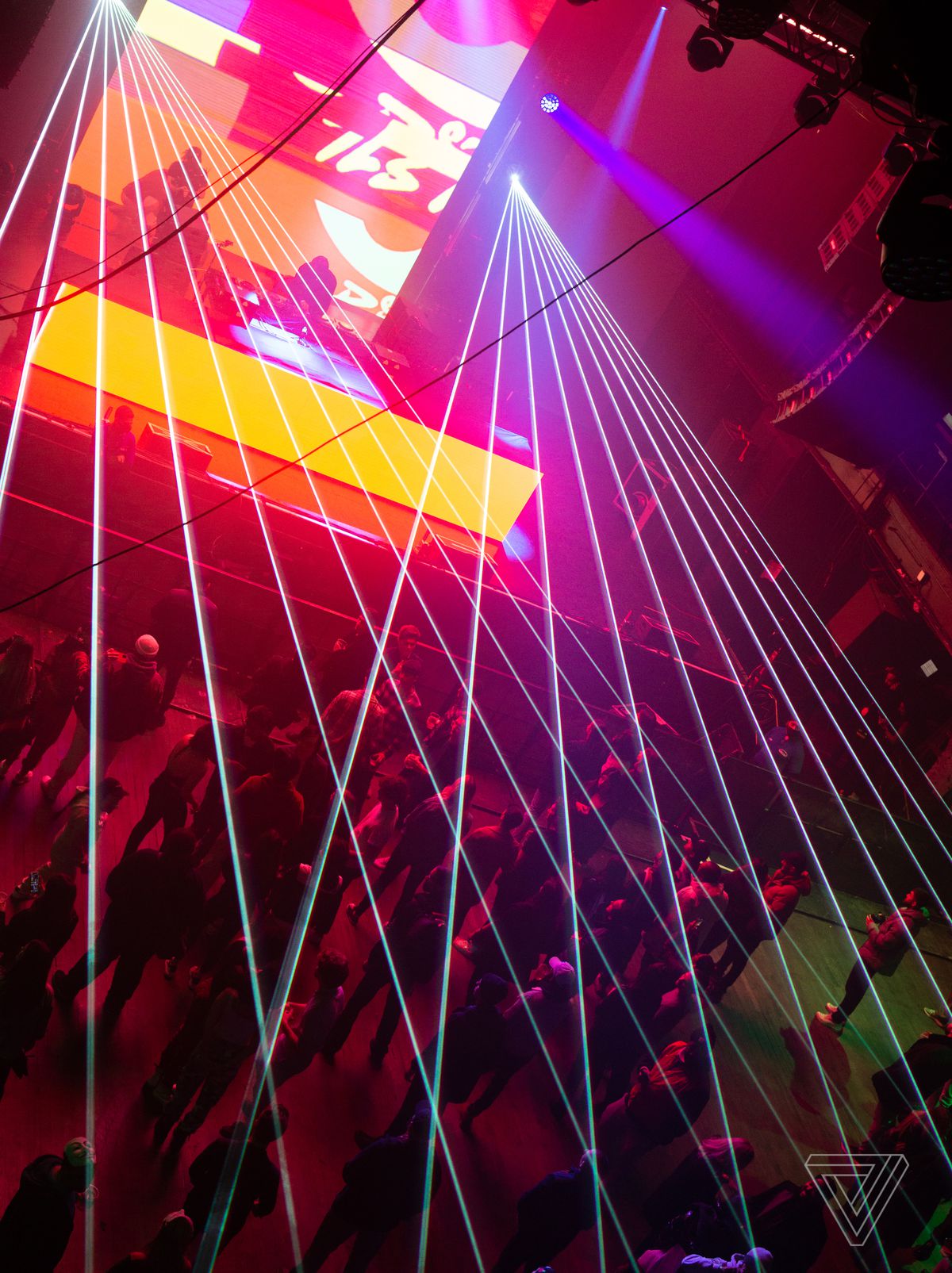 Another guy in a Bored Ape hoodie (who owns a mutant ape but not an ape proper) told me he was given a ticket to Dreamverse for free by a guy he’d just met who couldn’t make it. It’s all about the NFT community element, he said. He and the ticket gifter had spent the previous night on a scavenger hunt across the city that was somehow related to a pseudonymous NFT figure named Wagmi-san.

“It’s crazy, bro, we live in a fucking video game,” he shouted at me.

Unfortunately for me, a journalist who had come primarily to report on what Beeple’s artwork looked like in person, the NFT was not yet on display at this point. Beeple himself was hanging out in a corner holding beer and chatting with some people, though, so I figured I’d say hi. I’d spoken to him earlier this year, and I figured I should get a quote for this article — but a bouncer pushed me away when I got too close. Beeple left moments later.

Some time afterward, I ended up in a conversation with an artist and an employee of a major NFT exchange. They asked for my honest feelings about NFTs. I hesitated before answering.

“We won’t be offended,” the artist said.

I said that it’s fascinating how many vibrant communities have formed around them and that I love how they’re directing money to artists. I also said that I think NFTs are a pyramid scheme.

The artist was offended. The other person said the blockchain is forever and that this imbues value.

Finally, the music stopped, and the lights came up, and an emcee came on stage. He was wearing a floral jacket and holding a large gavel that he at no point used. He told the audience that they have to download an app so we could all take part in a communal AR experience. “Don’t activate the app. Just download it. Please,” he pleaded.

People started chanting for Alesso. He said they have to wait and please download the app.

At this point, the Beeple still had not appeared. It was 11:30PM, and Terminal 5 is very far from my home. I wanted to get to bed, but I was also curious how they were going to bring out the Beeple since the presentation Dreamverse promised — “a bespoke three-story-tall hybrid physical and digital structure” — sounded elaborate and impressive, and there was no elaborate and impressive three-story-tall hybrid physical and digital structure in sight.

It turned out, that exquisite work of public relations was just code for a screen. The screen, which has been behind the opening act DJs all night, started flashing — the emcee issued a halfhearted seizure warning — and eventually, the Beeple appeared stretched across the display. A short animation played, zooming into the Beeple, panning around, zooming out, panning, zooming in, showing the details and then the aggregate, repeating. It’s a few minutes long. Then the screen turned black, and people cheered. 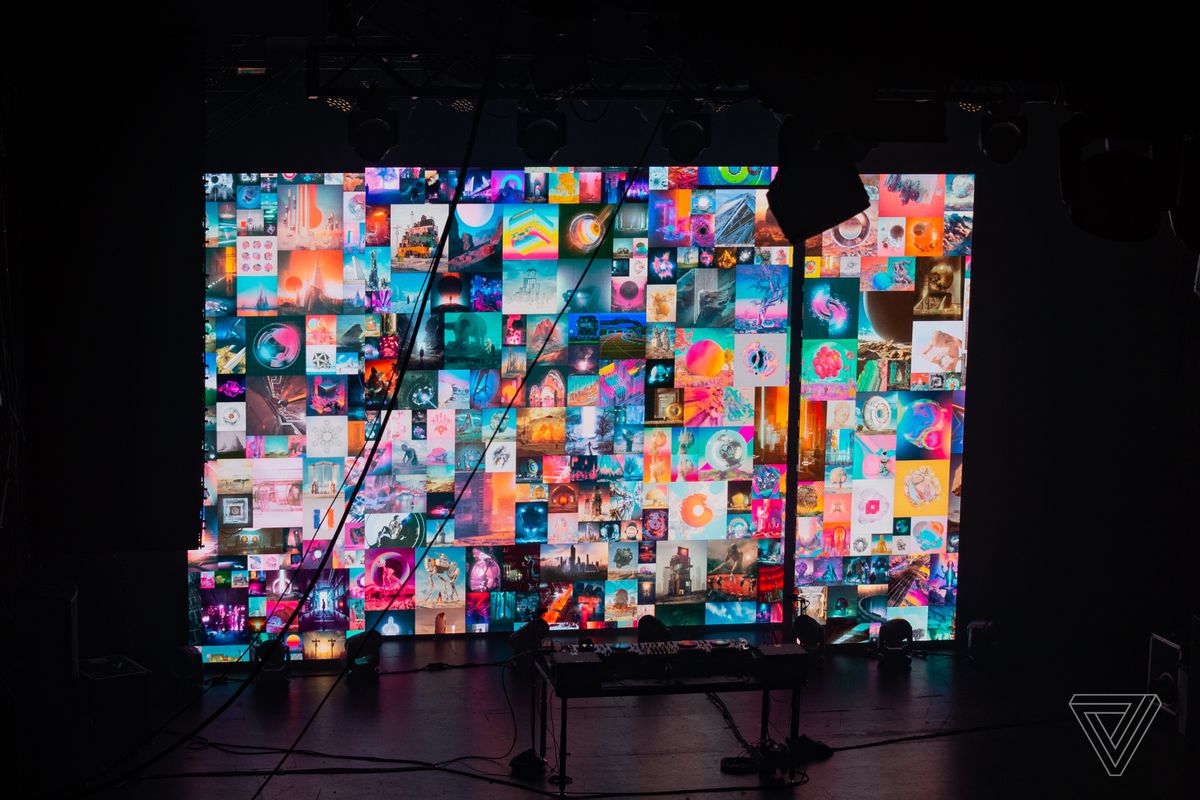 The $69 million Beeple, seen from the back of the venue, at an angle, because who knew this thing would only be on display for a matter of minutes? A partially zoomed in look at the artwork is shown above.

Metakovan came on stage and said a few words. “Thanks a lot, guys. See ya in the metaverse.”

I was ready to leave, but to fulfill my professional duties, I had to figure out what the AR app thing was all about. Everyone around me had their phones out, but they were all recording video of the Beeple debut — no one was actually using the app.

My own internet connection had been too slow to download the app in time, so I asked the guy beside me what it was like. He couldn’t get the app to work either. I left.

Photography by Jacob Kastrenakes / The Verge