Jamie Lee Curtis celebrated her daughter Ruby’s wedding over the weekend, but it wasn’t a traditional affair.

The Halloween star shared snaps from the event showing brides Ruby – who is trans – and her partner Kynthia dressed up in ‘cosplay’ as their favorite video game characters.

Curtis, 63, had previously revealed that she would be officiating the wedding in a World of Warcraft costume, as the character Jaina Proudmoore.

Cosplay, a portmanteau of ‘costume play’, is an activity popular among fans of fantasy and science fiction, where cosplayers dress up as a specific character.

It was not immediately clear which character Ruby had chosen, though some fans speculated it was inspired by the video game series ‘SkullGirls.’

Her partner Kynthia was dressed as Elphelt Valentine, a major character in the Guilty Gear series. 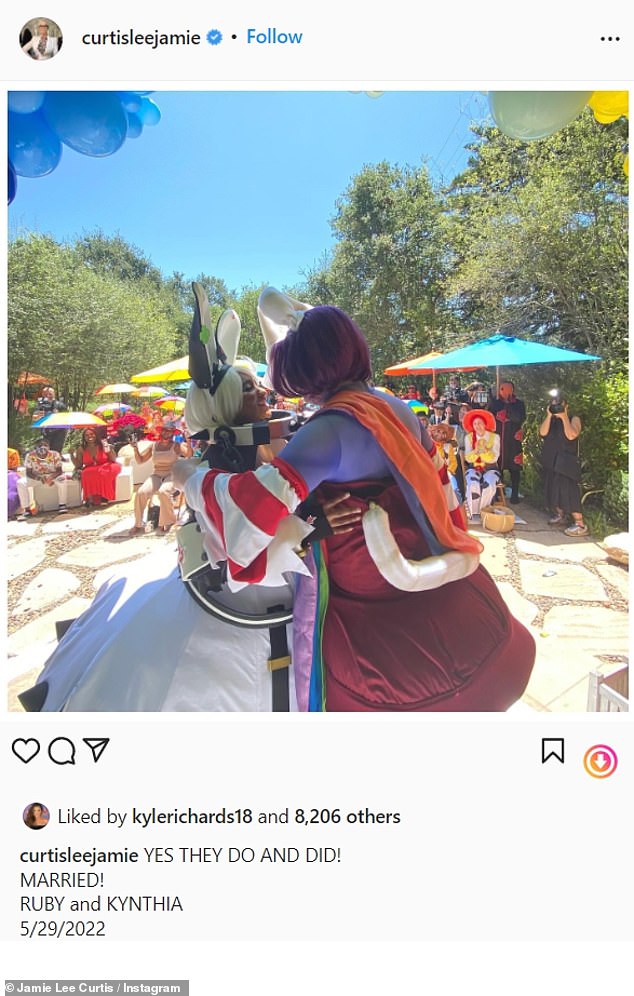 Happy days:  Guests were encouraged to attend the wedding dressed in character, with one guest dressed up as Woody from Toy Story 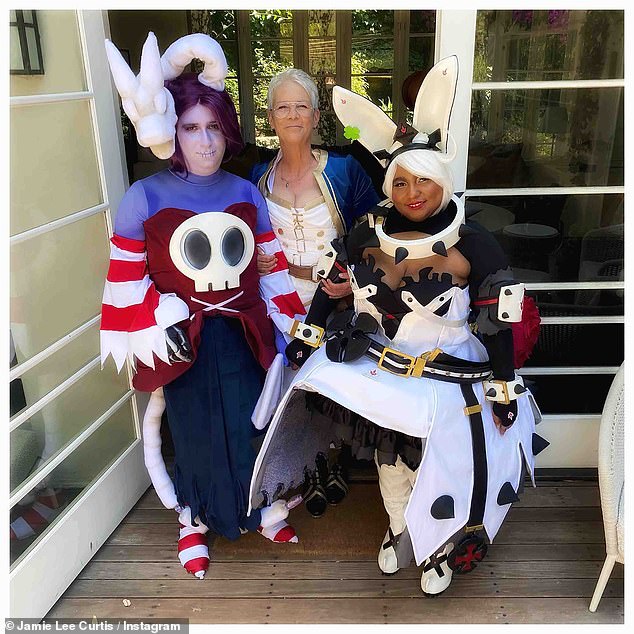 An honor: Curtis, 63, had previously revealed that she would be officiating the wedding in a World of Warcraft costume 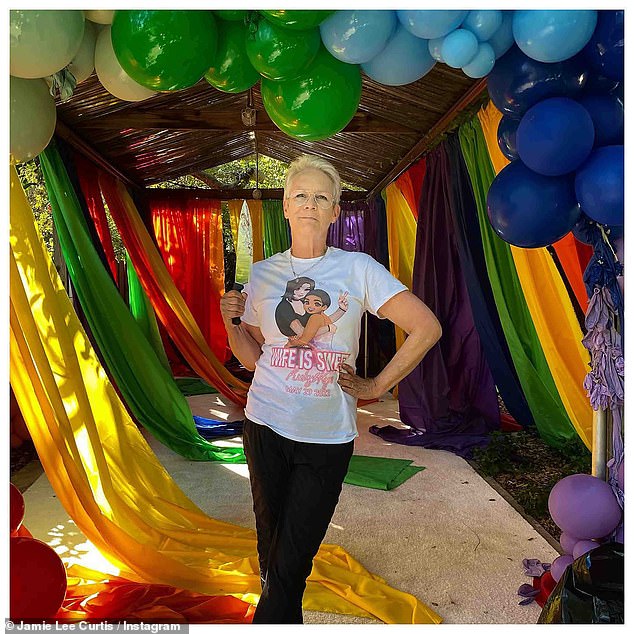 Making the cut: In another snap from her daughter’s big day, Curtis posed with a butcher’s knife as she teased the next installation in the Halloween franchise

Ruby, 26, who works as a video editor for a gaming personality on YouTube, is known for her love of dressing up having posed with her famous mother at events in costume.

In October last year, Curtis revealed that her daughter had come out as trans, saying the experience as a parent was like ‘speaking a new language.’

In another snap from her daughter’s big day, Curtis posed with a butcher’s knife as she teased the next installation in the Halloween franchise. 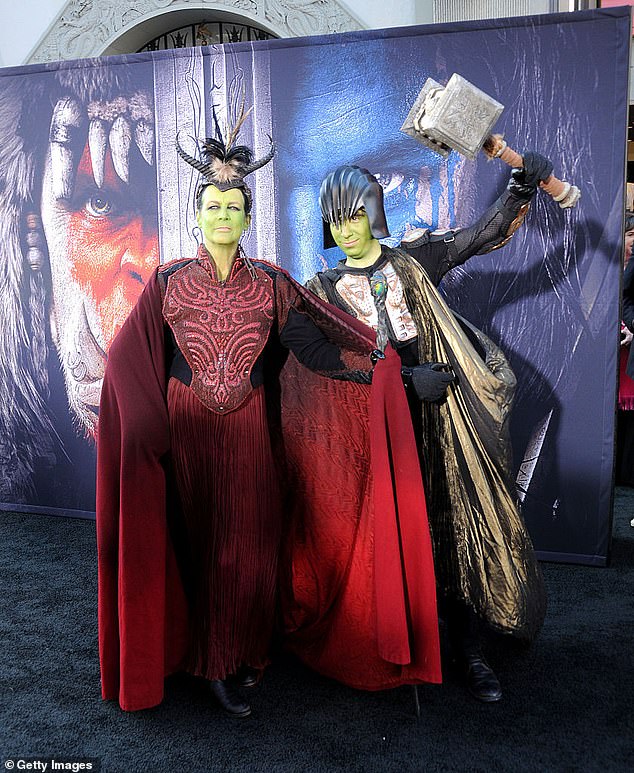 Dressing up: Curtis and her daughter Ruby are pictured above in 2016 at the premiere of Warcraft in Hollywood 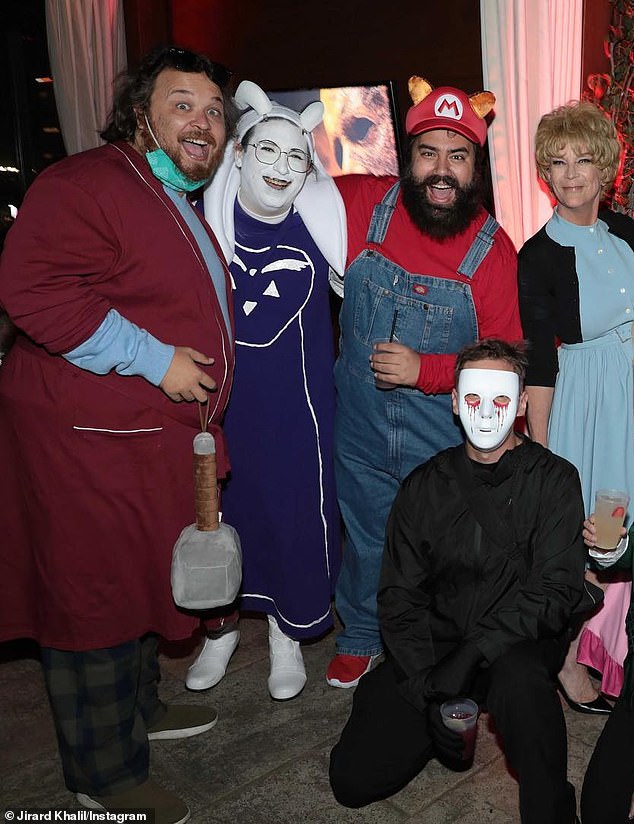 ‘YOU CAN’T MAKE THIS UP!’ she wrote. ‘The ONLY thing left over at the end of this entire BEAUTIFUL wedding, after everything was taken away was this f***ing BUTCHER KNIFE they cut the tiramisu wedding cake with! WIFE IS SWEET!’

In March this year, Curtis told Jimmy Kimmel she was planning to officiate her daughter’s cosplay wedding dressed as Jaina Proudmoore, a popular character on World of Warcraft.

Revealing that Ruby had picked the outfit for her, which was made by a seamstress in Russia.

‘Her name is Jaina Proudmoore,’ Curtis said of her cosplay outfit. ‘It’s a game. She’s an Admiral. And so I went on Etsy and wrote ”Jaina Proudmoore costume” and up came a woman who had the costume. I said, great. You know, we exchanged communication. 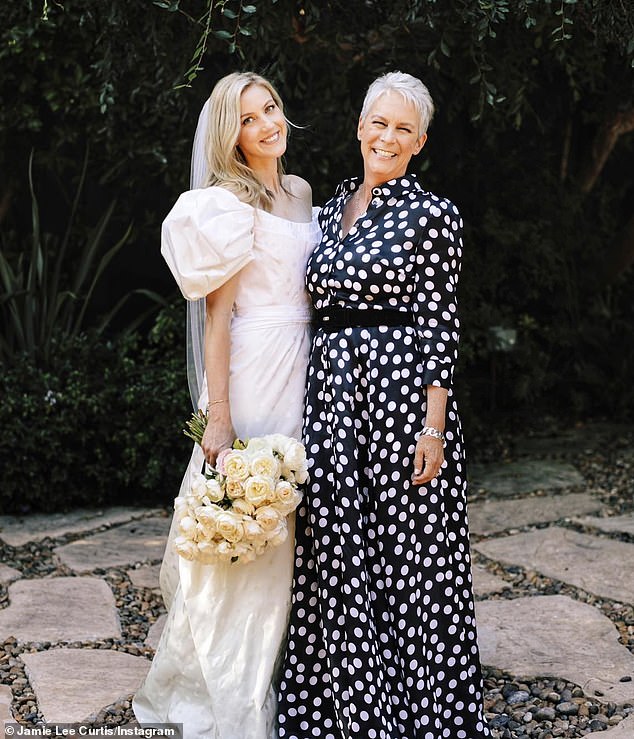 Mother-of-two: Jamie and the 75-year-old British baron are also parents of 35-year-old adopted daughter Annie (L), who tied the knot with Jason Wolf in 2019

‘I paid her a nice sum of money for this and all is going great. I sent her my measurements. Everything was okay until a month ago, two or three weeks ago, I got an email from her. She said there may be a delay in sending the costume. I said, ”Okay, that’s fine, a week or two is fine”,’ the actress continued.

She added: ‘It’s a cosplay wedding. It’s really exciting. We’re going to have a beautiful picnic in the backyard, and I’m really excited.’

Speaking to People about her daughter last year, Curtis said there were ‘tears involved’ when Ruby came out, but she is ‘a grateful student’ when it comes to supporting her daughter. 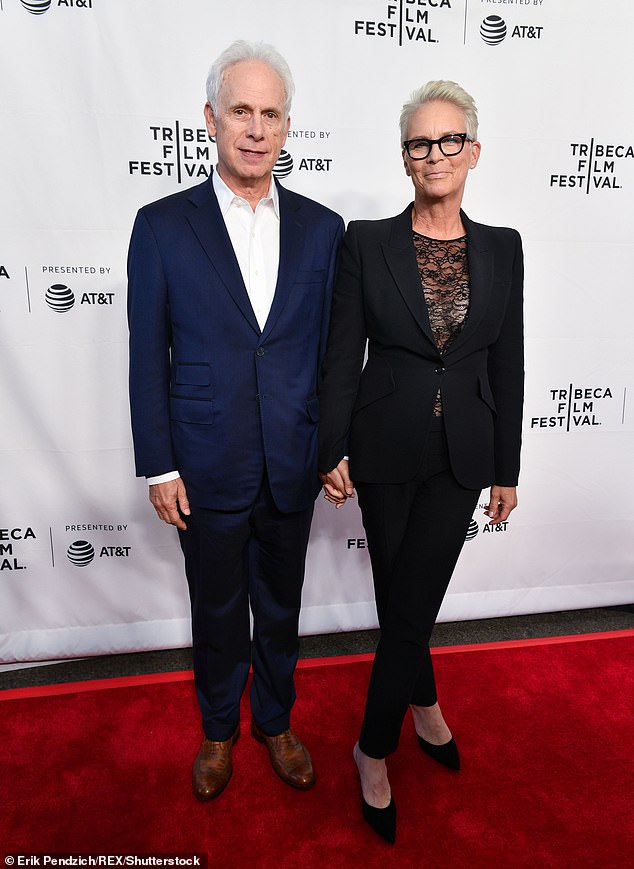 ‘It’s speaking a new language’: Last year, the Halloween Kills producer-star admitted that she and her husband of 37 years – Emmy winner Christopher Guest (L, pictured in 2019) – ‘still slip occasionally’ by misgendering Ruby and calling her by her birth name

Curtis admitted that she does ‘slip up’ with Ruby’s pronouns occasionally, though Ruby said she is never ‘mad’ when that happens, because she knows her mom is doing the best she can.

‘It’s speaking a new language,’ she said. ‘It’s learning new terminology and words. I am new at it. I am not someone who is pretending to know much about it. And I’m going to blow it, I’m going to make mistakes. I would like to try to avoid making big mistakes.’

Ruby said that she knew she was different when she was about 16, but due to a negative experience in therapy, she didn’t come out ‘when I probably should have.’

It wasn’t until a few years ago, while she was still going by Tom and dating her now-fiancé, that she first admitted she might be trans.

Her fiancé said: ‘I love you for who you are.’