After two years of dating, Jang Nara is now officially married to her non-celebrity boyfriend. The actress’ dreamy wedding looked straight out of a fairytale as she walked down the aisle looking like a perfect bride. Although the “Sell Your Haunted House” and her agency Rawon Culture, were tight-lipped about her big day, here are some details fans shouldn’t miss about Jang Nara’s wedding-from star-studded guests to the couple’s request to attendees and media.

Jang Nara’s wedding was held on the afternoon of June 26.

According to a report, the actress and her now husband opted to have an outdoor wedding at Naegok-dong, Seoul.

Based on the photos shared by the guests, the atmosphere was not only filled with love but also with colorful flowers boasting stunning visuals.

Meanwhile, the actress wowed guests with her dazzling beauty as Jang Nara wore a simple yet timeless long sleeve silk dress. She paired the dress with a short veil and held a bouquet as she entered the reception.

Following Jang Nara’s wedding announcement, her agency shared that the couple will have an intimate wedding attended by their family, relatives, and acquaintances.

Present in the ceremony is none other than broadcaster Park Kyung Rim who hosted the wedding. She and the actress worked together in the MBC sitcom “New Nonstop.”

To recall, Park Kyung Rim was also said to be the host of Hyun Bin and Son Ye Jin’s “wedding of the century” last March.

In addition, Lee Soo Young entertained the crowd with a congratulatory song.

Apart from the host and singer at Jang Nara’s wedding, spotted at the ceremony are CNBLUE’s Yonghwa and Lee Sang Yoon.

At the wedding, the duo was asked by the host to give a special message to the newlyweds.

According to an outlet, CNBLUE’s Yonghwa was the first to deliver his speech and made the guests laugh as he told the actress shouting, “Noona, goodbye!”

As for Lee Sang Yoon, he delivered his message with a loud voice and said “Goodbye! Be happy! Have a good life!”.

The actor and the bride appeared in the SBS drama “‘VIP” where they both played lead stars.

Adding to the list of Jang Nara’s wedding guests is model-actor Jung Tae Woo, who worked with the actress in MBC’s “Nonstop 3.” 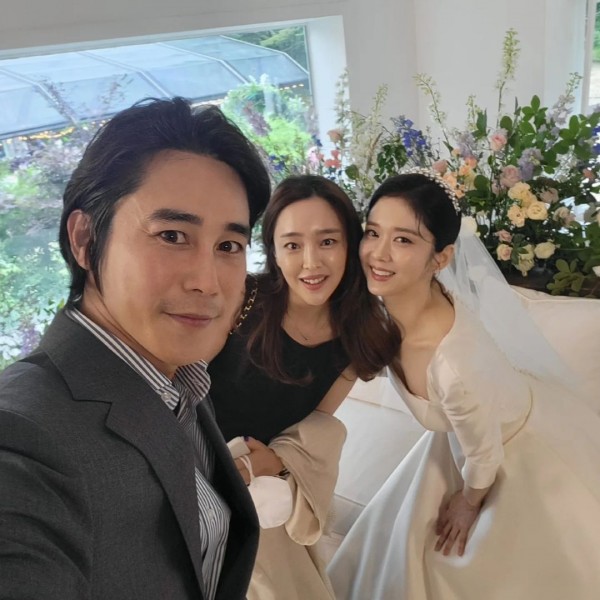 The “The King of Tears, Lee Bang Won” actor shared a post on his Instagram featuring the stunning bride with him and his wife.

On his Instagram, he greeted the Hallyu star on her special day and mentioned how pretty she looked at her wedding.

Of course, Jang Nara’s brother Jang Seong Won also shared a glimpse of the actress as she arrived at the reception.

Although most of the guests shared a sneak peek of Jang Nara’s wedding, they made sure that the groom’s face was hidden.

This because the actress wanted to keep her husband’s identity private since he is a non-showbiz personality.

However, it was previously mentioned by several outlets that he worked as a cinematographer and met Jang Nara while shooting “VIP.”

IN CASE YOU MISSED IT: Jang Nara Relationship: Past, Rumored Boyfriend Before Meeting Non-Celebrity Fiancee