Japan’s Princess Mako is no longer a royal after finally marrying her university sweetheart today, forfeiting her status in the process.

The niece of Emperor Naruhito and her fiance Kei Komuro, both 30, skipped the usual rites of a royal wedding, including a reception, in favour of registering their marriage in Tokyo this morning.

According to Kyodo News, the Imperial Household Agency (IHA) submitted legal paperwork to register the couple’s marriage on their behalf.

Princess Mako pictured leaving her home in Tokyo to register her marriage to Kei Komuro. (AP)

The princess is now Mako Komuro, as Japanese law stipulates female members of the Imperial family must relinquish their royal title if they marry a commoner; this same rule does not apple to royal-born men.

Mako is the second member of the family to effectively sacrifice her title for love in recent years. In 2018, Princess Ayako was registered as a regular citizen after her wedding to shipping firm employee Kei Moriya.

Princess Mako was photographed leaving the Imperial residence in Tokyo at 10am local time, wearing a pale dress with a face mask and carrying a bunch of flowers. She farewelled her parents, Prince Fumihito and Crown Princess Kiko, and sister Princess Kako before departing.

READ MORE: Royal weddings that have been plagued by controversy 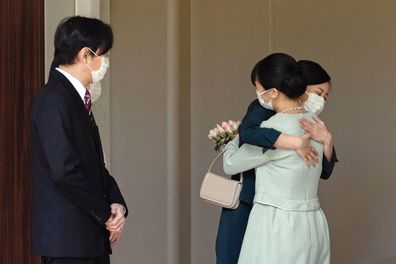 Princess Mako and her sister Princess Kako hugged as the bride left her home this morning. (AP) 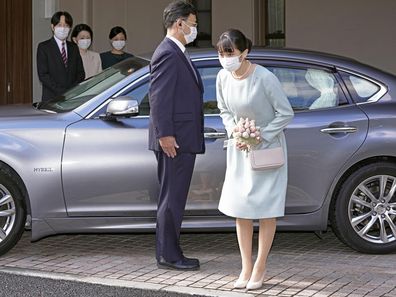 While the newlyweds will take part in a press conference this afternoon, Kyodo News reports they have chosen to only give opening remarks and share written answers to five questions chosen from a selection submitted by reporters.

This is because Mako — who was diagnosed with PTSD due to the intense public scrutiny of the couple throughout their four-year engagement — felt “a strong sense of anxiety” about having to verbally answer questions, the IHA said.

The couple, who met as students at Tokyo’s International Christian University in 2012 and announced their engagement in 2017, will move to New York, where Komuro works as a lawyer. 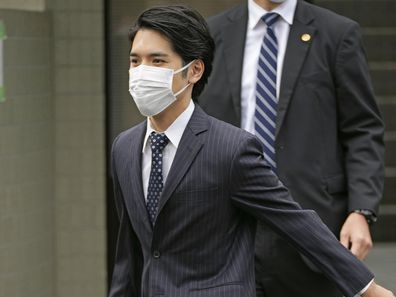 Kei Komuro returned to Japan from New York, where he works as a lawyer, last month. (AP)

Ahead of today’s wedding, Mako turned down a generous payment of roughly $1.7 million, offered to female royals by the Japanese government before they renounce their titles.

The path to married life hasn’t exactly been smooth for the Komuros.

The announcement of their engagement was positively received, with Princess Mako describing her fiance, the son of a single mother, as “sincere, strong-minded, a hard worker with a big heart”.

READ MORE: The most beautiful tiaras worn by royal brides through the years 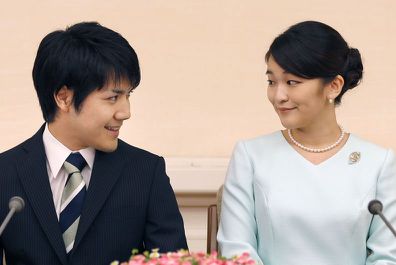 The couple pictured during the announcement of their engagement in 2017. (Getty)

However, the couple’s union was soon mired in tabloid controversy and public disapproval that continued for four years.

In 2018, the wedding was postponed, with the Imperial household saying the cause was a “lack of preparation”. However, at the time reports had emerged of a financial dispute between Komuro’s mother and her former fiancé. Some tabloids suggested the lawyer was a “gold digger” seeking money and prestige through his royal connections.

At this time, Komuro headed to New York to pursue his studies in law, returning to Japan last month. 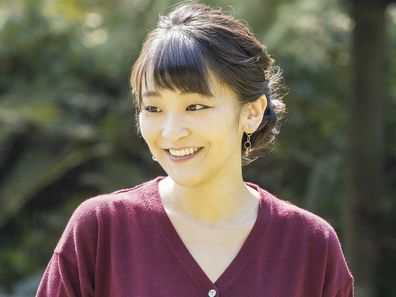 Mako, who celebrated her 30th birthday on Saturday, has now been registered as a regular Japanese citizen. (AP)

When the wedding date was finally confirmed at the start of October, the Imperial Household Agency revealed the toll of this public scrutiny on the bride-to-be, who was suffering from complex PTSD.

Princess Mako’s psychiatrist told media she felt “pessimistic” and “[found] it difficult to feel happy due to the persistent fear of her life being destroyed.”

The most extravagant royal weddings of modern times