A Bachelor Nation reunion! Fans may have been surprised to see Luke Pell — one of JoJo Fletcher‘s final four — at her brother’s wedding, but it turns out that the former Bachelorette contestant’s fiancée, Amanda Mertz, has a connection to the family.

“It was really cool. It was a full-circle moment, I think for all of us,” Pell exclusively told Us Weekly, noting that Mertz and Fletcher “have become friends” through attending the former Bachelorette’s brother Ben Patton’s now-wife’s Bachelorette party in Cabo. “They were both bridesmaids and spent some time together. And, then, you know, obviously, I’ve seen JoJo and Jordan [Rodgers] through the years at certain events and stuff that involved Bachelor Nation.”

Fletcher picked Rodgers during her 2016 season of the ABC series and the twosome wed earlier this year. Pell, for his part, got engaged to Mertz in Italy earlier this month.

“We’re all close and we love each other and we’re excited for each other and able to support each other,” Pell continued. “JoJo and Jordan’s wedding was just, like, a month or almost two months ago. So it was cool to just, you know, get to catch up with them and hear about everything that they’ve been doing lately.” 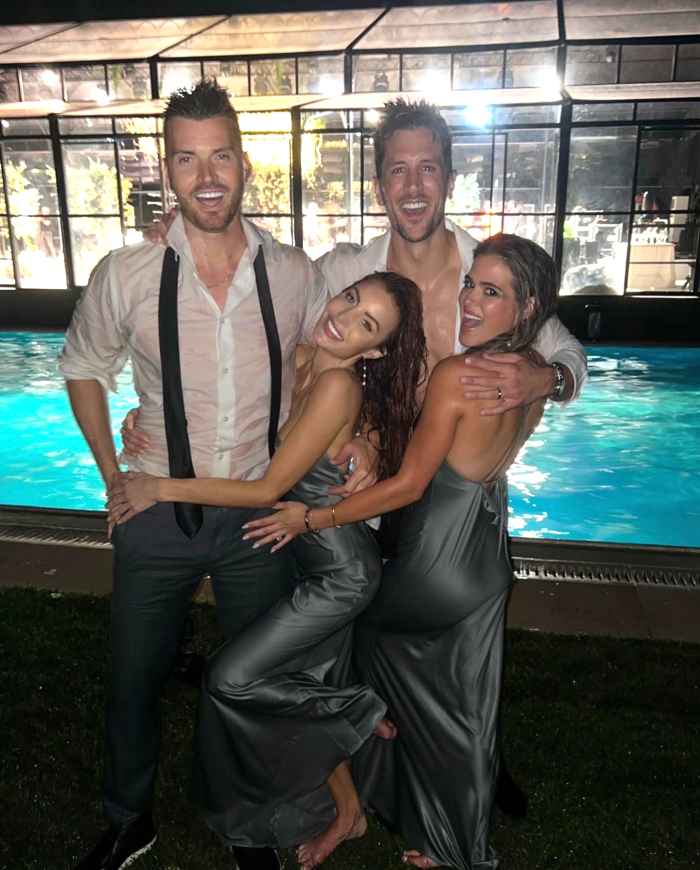 The newlyweds even posed for a selfie with Pell, who told Us that the moment was not awkward “at all,” at the wedding this summer.

He added: “It was great. The entire wedding party ended up in the swimming pool by the end of the night.”

“It’s such a roller-coaster for every cast member that goes through that experience of being on a reality dating show of any kind and especially The Bachelor,” Pell told Us. “Everybody, I think, has their own path after the show’s over that they have a choice to make. And say, ‘Well, do you want to continue being a serial, reality TV star and continuing to pursue more TV shows and enjoy just that part of life? Or do you want to continue pursuing a relationship and moving into the next season of your life — starting a family and those types of things.’ For me, I feel so confident in the place I’m at now after having experienced going through that portion of my life.”

The next steps for Pell include moving to Scottsdale, Arizona, with his fiancée and planning their nuptials.

“We’re leaning toward doing it on our ranch in Texas,” he said, adding that the couple are “shooting for spring of ’23.”

With reporting by Diana Cooper