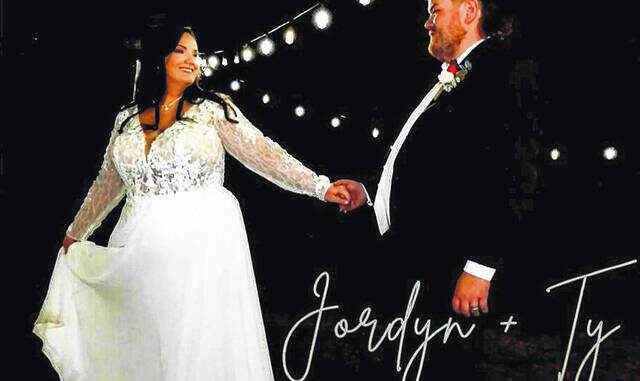 The groom is the son of Kim and Johnny Pruitte, Jr. of Hamlet. The grandson of the late Mr. and Mrs. Paul V. School, Kr. of Rockingham, and Mr. and Mrs. Johnny Pruitte, Sr. of Laurel Hill. Ty graduated from Richmond Early College and attended Richmond Community College. He is employed with Scholl Mechanical Company as a service technician in Richmond County.

Rehearsal and dinner was held Friday, December 10 at Hinson Lake in Rockingham by the groom’s parents. A special slide show was given by Anthony Bristow.

The ceremony of love was held at the Wallace Ledge in Wagram, NC with the Rev. Johnny Pruitte, Sr, officiating. The music was prepared by Jason Butler. The chosen colors of pinks in pastel and burgundy ravished the ceremony. Anthony Bristow, Keith Trail, Daniel Pruitte, Ben Dawkins, and Jarrett Carter were the chosen groomsmen. The best man was his father, Johnny Pruitte, Jr. The ushers were Landon Horne, Carly Dawkins, Emily Pate, and junior bridesmaid Stacy Morgan. The Matron of Honor was cousin of bride Cassi Horne. The flower girls were cousins and nieces of Halli Horne, Torri Horne, Layla Norton and Nakia Norton. The groom’s niece, Caroline Willett, rode in a wagon pulled by Emma Willett.

The bride was escorted by her father down the aisle in a top-laced, long-lace sleeve n-neck. It had a simple-sequined waistline with a shearing dress. The dress was embellished with buttons down the back with a train to add elegance. The bride’s brothers Zach Norton and Blake Norton joined at the altar along with their father to give her hand in marriage.

The reception followed the ceremony with dim lights and music to set the atmosphere. A portrait of the bride by a three-tier white wedding cake with lights, live flowers and radiant table skirt of burgundy lit the room. The couple’s table consisted of lighted candles, soft pink and burgundy roses with greenery honored the two. Colors of white with burgundy accents on the table and chairs with tall trumpet flowering glass vases and candles were used for centerpieces.

Upon returning from Savannah, Georgia, as their honeymoon destination, the couple will reside in Richmond County.

A Destination Wedding Style for Every Couple

4 Varieties + How To Plant & Care For Them