The couple had never visited the Kennett Square destination in the spring.

Delivering the latest in style, inspiration, helpful tips and tricks, and everything else you need to know to plan the perfect Philly wedding.

There’s nothing better than exploring nature — particularly when you can experience a favorite setting in a new way. Such is the case with this couple. While they are big fans of Longwood Gardens in Kennett Square during the winter, they’d never been in the spring. So they decided to give it a go for their engagement photos. Robert Carter of R. Carter Photography snapped all the scenery and style, which you can discover below. 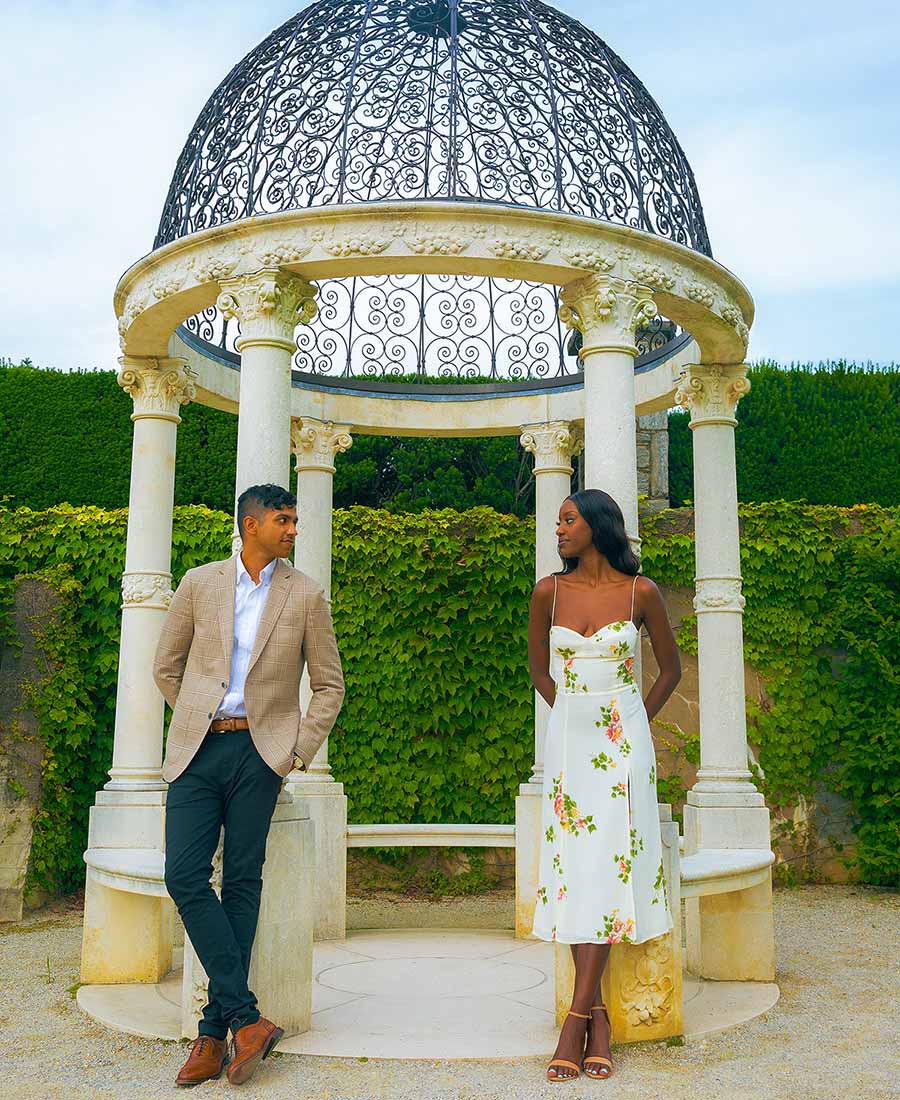 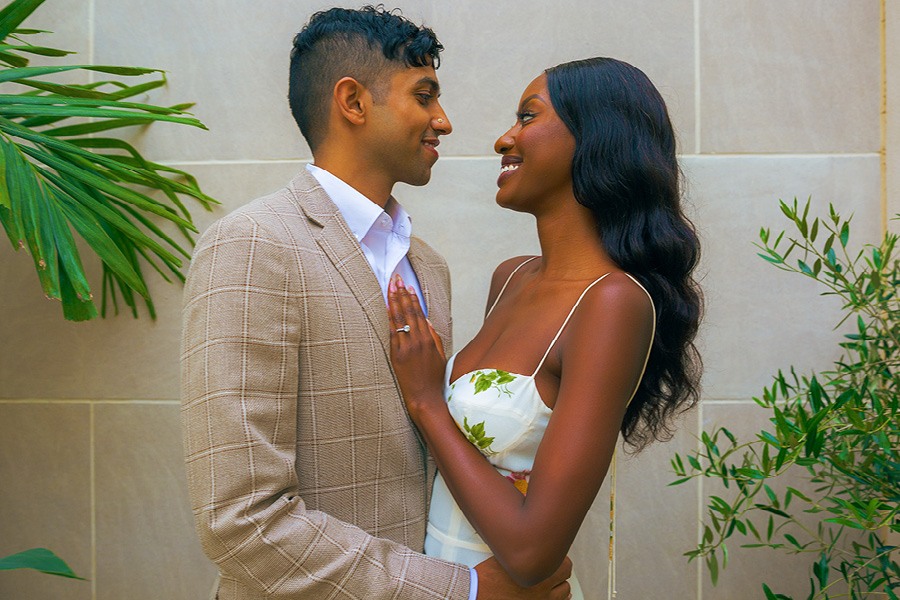 The couple: Vanessa Stay, 27, and Harman Aulakh, 28, of Rittenhouse

How they met: It all began with shawarma back in 2015. Harman, then a Drexel student, went on the hunt for the perfect platter after his go-to shawarma spot was closed. He ended up at the Mediterranean restaurant in University City where Vanessa, who attended Temple, was working. Harman recognized her immediately — turns out they’d matched on Tinder. “I tried being smooth, but failed to make an impression,” says Harman, now a marketing manager for Onvo. He promised himself that he’d return and ask her out — but on each subsequent visit, Vanessa, who today is a mental health therapist, was never there. “I don’t think I’ve ever eaten so much shawarma in my life.”

A little over a year later, they matched again on Tinder, and Harman worked up the courage to message her. Three and a half years after that, in June 2020, they became engaged. 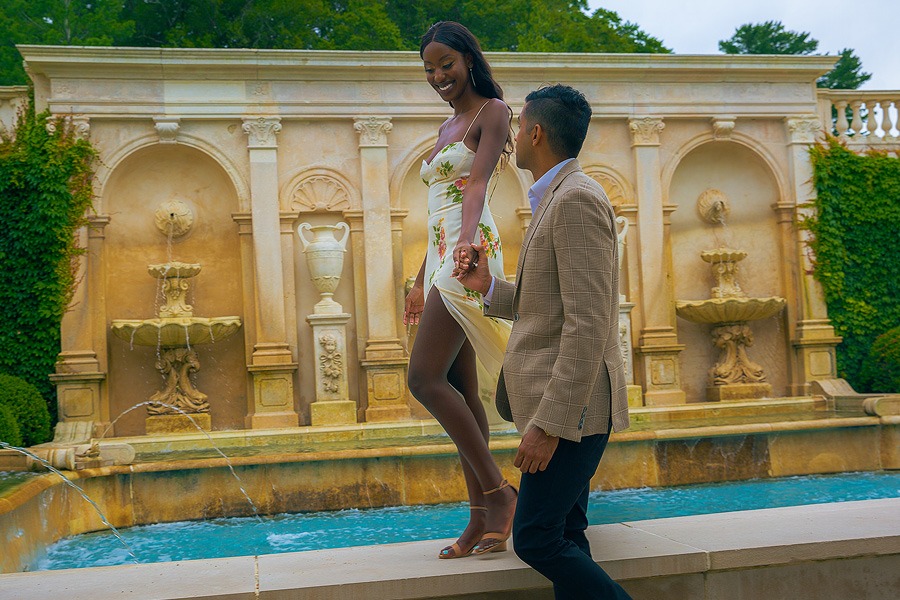 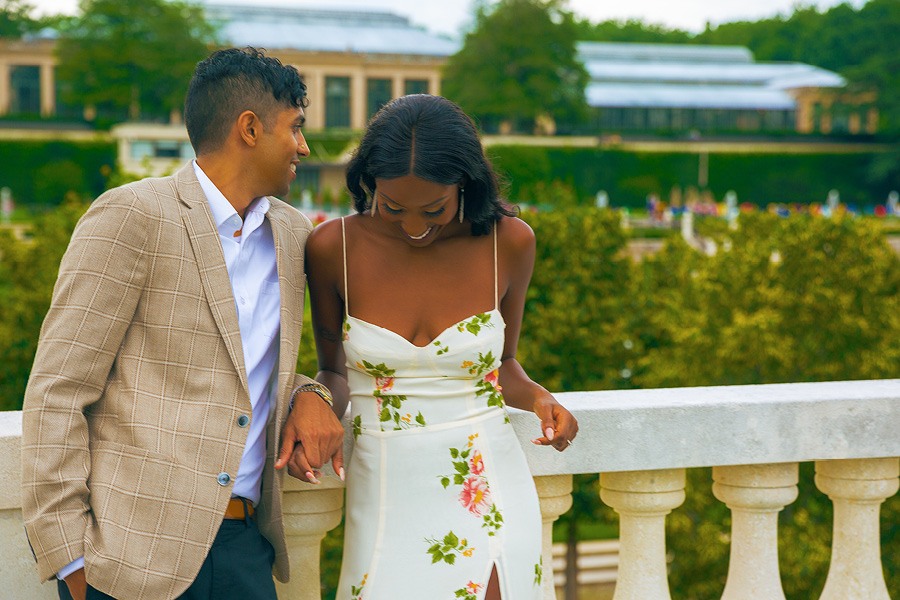 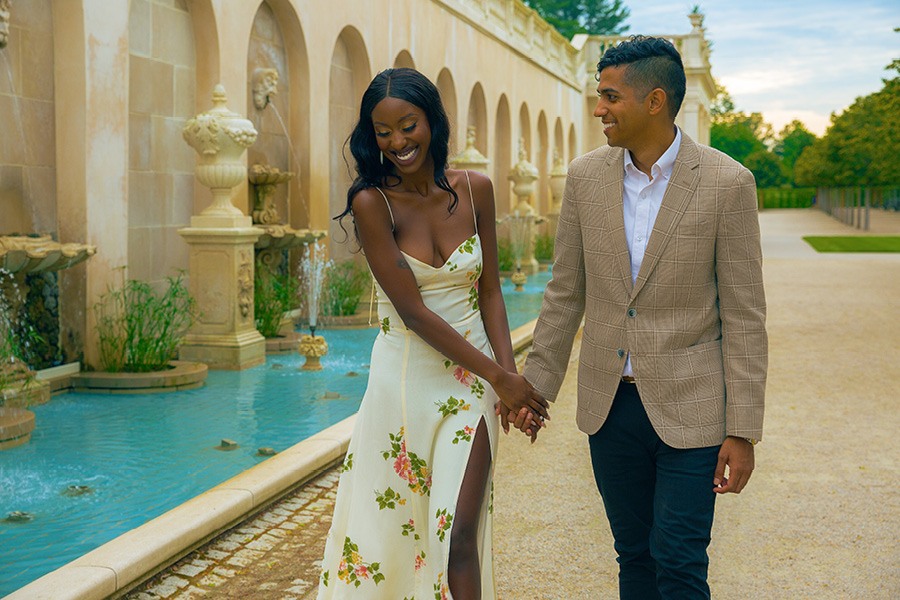 Their proposal story: Harman’s initial proposal approach (a private dinner at Vedge, Vanessa’s favorite restaurant, with all of their friends and family) was scrapped due to the pandemic. Instead, Harman used a socially distanced outdoor gathering at his parents’ house in Northeastern Pennsylvania to celebrate his cousin’s 21st birthday as a decoy. His mom and sister helped him set up flowers, photos of the duo, and balloons that read “Marry Me” in front of their house. Right after he popped the question, Vanessa’s parents, who drove in from New Jersey, pulled into the driveway. “It was the first time we had seen them since the lockdown, so it was a really happy moment for all of us,” says Harman.

The engagement-session approach: The duo chose Longwood Gardens because of its significance to their relationship: Every year for their dating anniversary (December 10th), they visit the picturesque spot for its Christmas showcase. However, they had never been in the spring or summer. “We’ve seen so many pictures of the fountains and the lush gardens in the springtime, and we’ve always talked about making a trip out there during the warmer months,” shares Harman.

Its “unparalleled beauty” proved to be a perfect setting for their photo session on June 18, 2021. Harman, in a Hugo Boss jacket and Topman pants, and Vanessa, in a floral dress from Reformation, spent the day wandering the grounds, taking pics amid the trees and topiaries, the pathways, meadows and grand architecture. 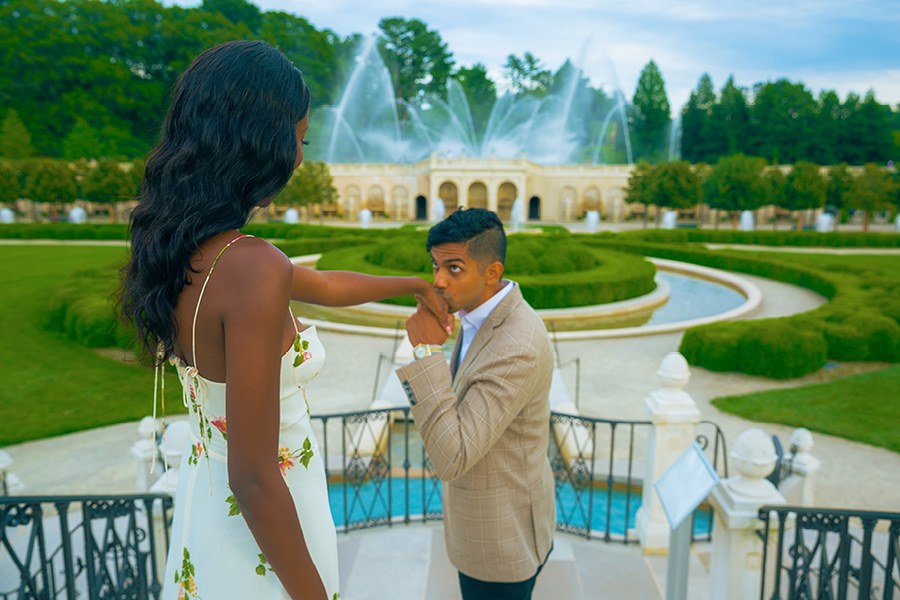 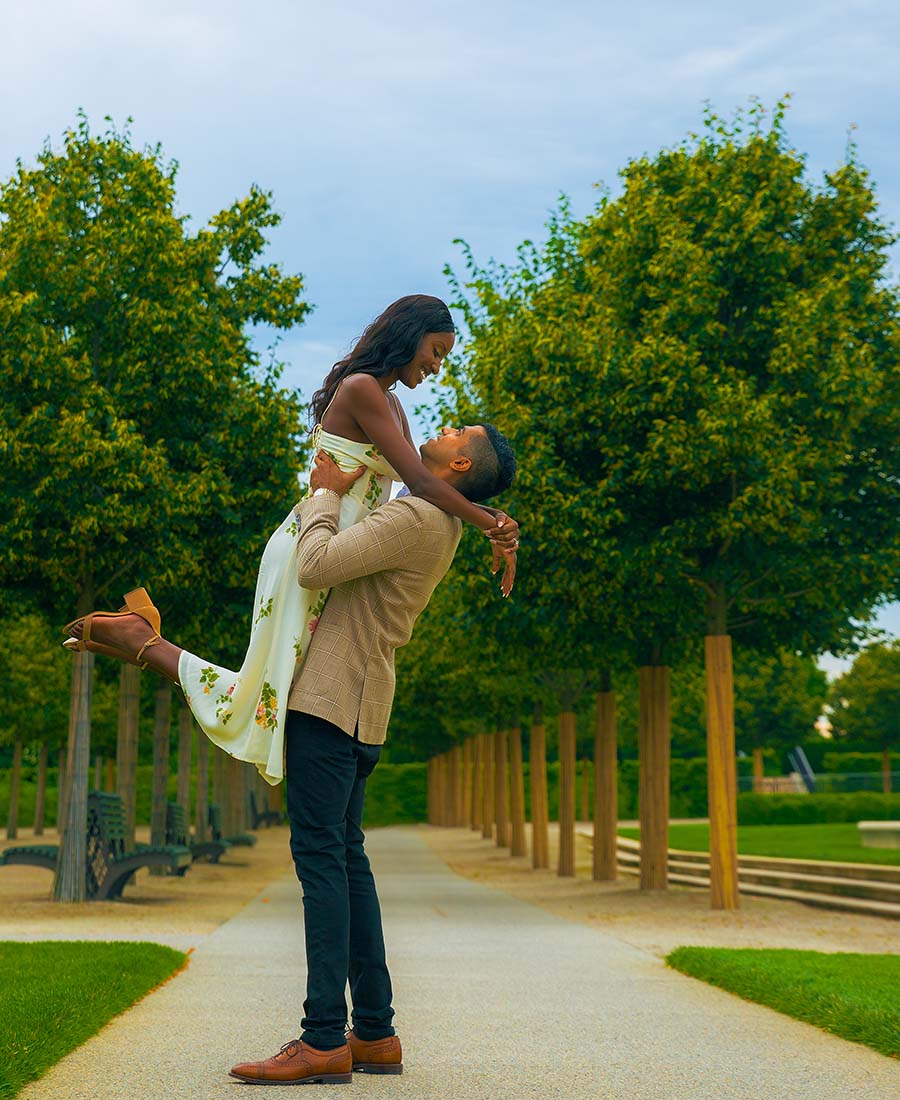 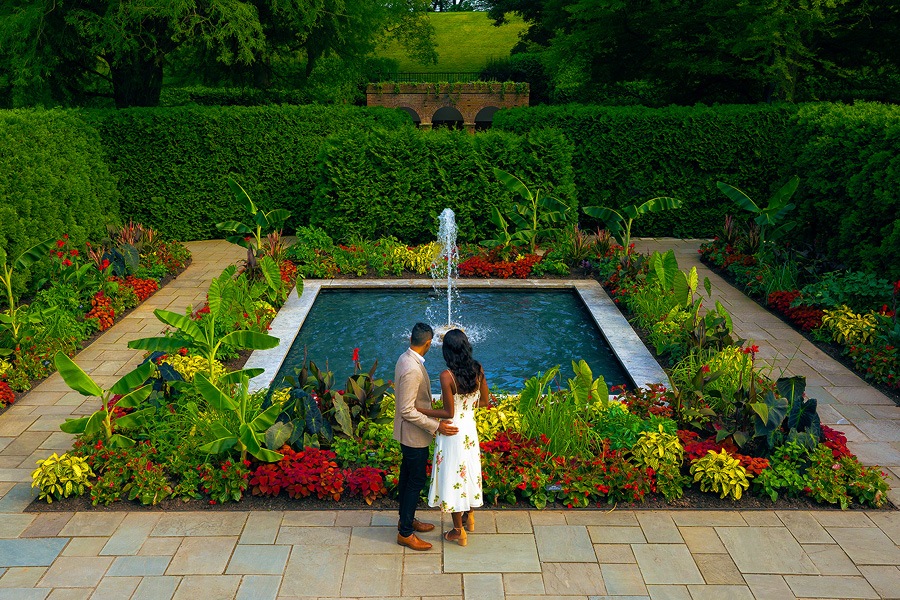 A photo moment: Ask Harman which images he thought were hardest to pull off, and he’ll say the ones where he and Vanessa are running through the topiaries because he didn’t know what to do with his hands. “I must have asked to redo that photo 10 to 15 times,” he admits. “I felt like Uncle Jack from It’s Always Sunny in Philadelphia, with how concerned I was with how my hands looked.” However, he says it added some lightheartedness to the last few shots of the day. 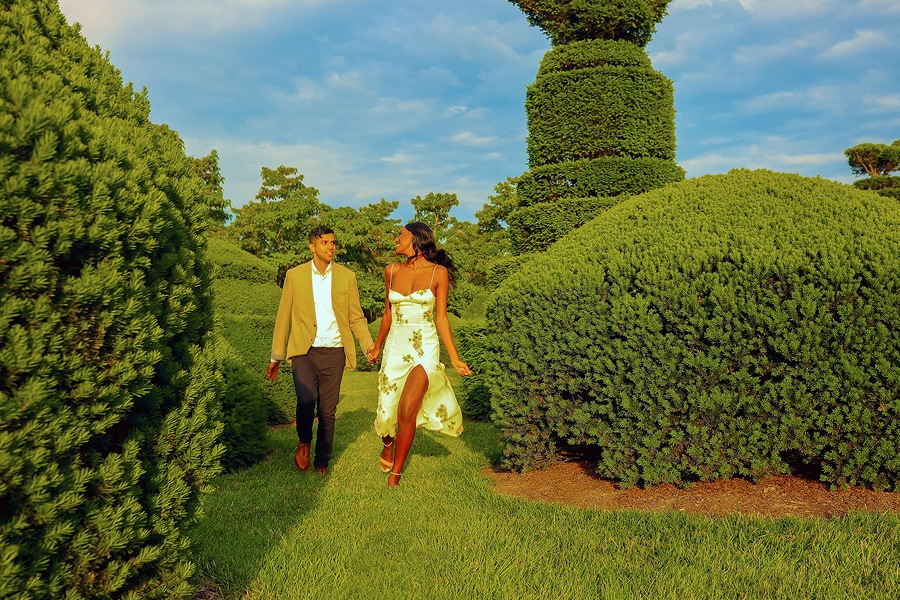 The wedding plans: The couple will hold their multi-day, multicultural wedding next month at the Loews Hotel in Midtown Village; their festivities will include a traditional Sikh ceremony and an American ceremony and reception.

This interview has been edited for clarity and length.

Getting married? Start and end your wedding planning journey with Philadelphia Weddings’ guide to the best wedding vendors in the city.