A summer 2017 weekend of car racing in Montreal got off to a roaring start when Karine Idrissi and Karel (Chuck) Svoboda met at the Ritz Carlton’s Grand Prix kick-off party. “Chuck’s friend actually started chatting with me first, but the two of us quickly gravitated toward one another,” says Karine. “Turns out we had many acquaintances in common, yet we had never met. We came into each other’s lives at the perfect time.” 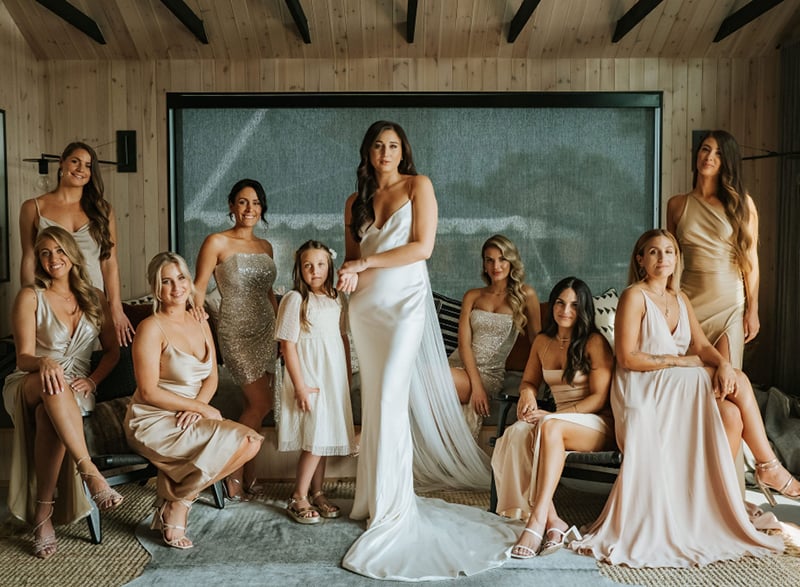 Karine says she knew she had found her soulmate in fellow Montrealer Chuck because everything between them felt easy. “After many heartbreaks, it’s the most incredible feeling to meet someone who made falling in love feel safe,” she says. “Chuck showed up for me since the day I met him. Our lives immediately blended so well.” 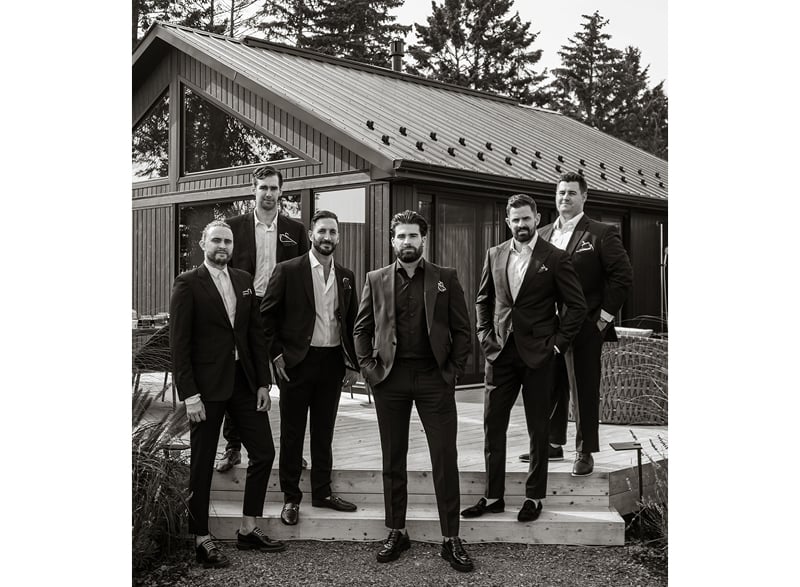 After three years together, Chuck proposed to Karine on Christmas morning. It was a sweet nod to his future in-laws who also got engaged during the holiday season. “I always shared my parents’ story with Chuck, and that was a little nugget that stayed with him,” says Karine. “He woke up early and started to play Christmas music really load and was adamant we wear our matching onesies to open our presents. Just as we were finishing, he told me he forgot one gift—as I grabbed it, he got down on one knee.” 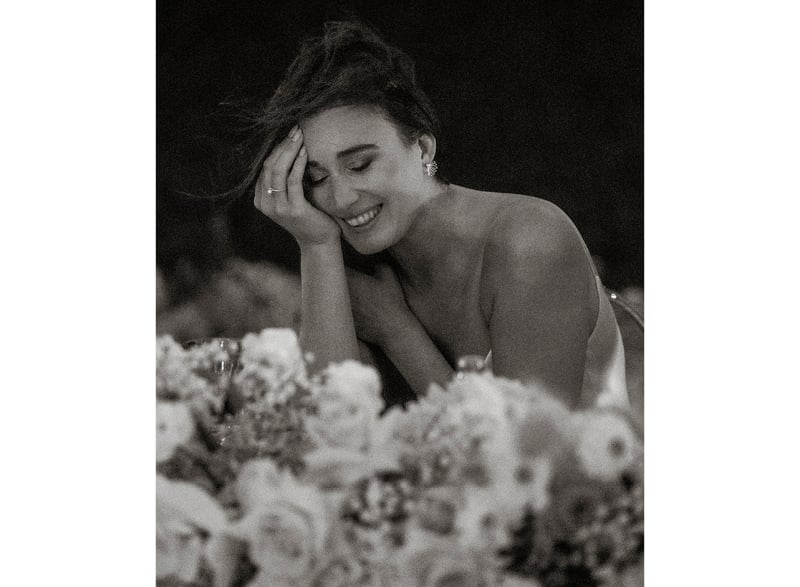 Karine and Chuck married in September 2021 among 87 guests. The couple held their celebration in Prince Edward County at the stunning lakefront resort Wander. Karine says she started looking for venues the day after getting engaged and she happened upon Wander, which hadn’t yet opened. “They had the perfect date, so I snatched it up before seeing anything.” 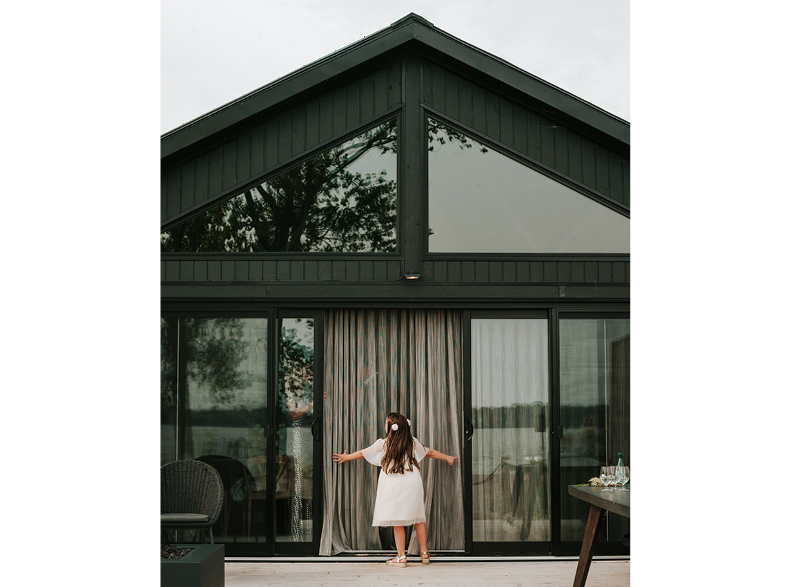 The relaxed vibe of Wander in Prince Edward County made everyone feel at ease, including the smallest members of Karine and Chuck’s bridal party. Photo: Joel & Justyna

PR pro Karine and tech recruiter Chuck wanted an “ethereal yet warm” vibe for their late summer wedding. The palette was classic neutrals: white, black and beige. “I wanted the whole day to feel like adult summer camp—but make it luxury,” says Karine.

Karine worked with the wedding planning team at Blush & Bowties, and the on-site wedding planner at Wander to bring all the details of the couple’s dreamy celebration together. Things kicked off the night before their wedding with a rehearsal dinner at PEC restaurant Flame & Smith, followed by a welcome bonfire party. “After such tough pandemic times, it was so special to be able to be with our closest friends and family,” says Karine. “Everyone enjoyed wine and beer and belting out songs down by the water.” 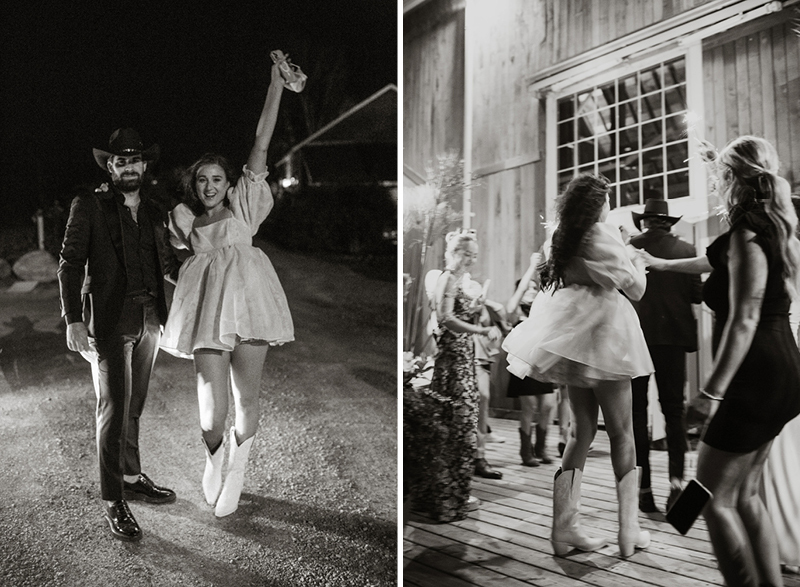 “We threw a wedding after-party in a barn close to our wedding venue,” says Karine. “Chuck and I and went all out with the cowboy theme—it was so much fun!” Photos: Joel & Justyna

The couple returned to the waterfront with their guests the following day for their ceremony. Breathtaking floral installations created by Floralora, which included orchids, oversize hydrangeas and puffs of baby’s breath beautifully complemented the serene natural scene. “Every detail of the flowers was perfect and minimalist, just as I had envisioned it,” says Karine. “The vision was literally plucked from my Pinterest board!” 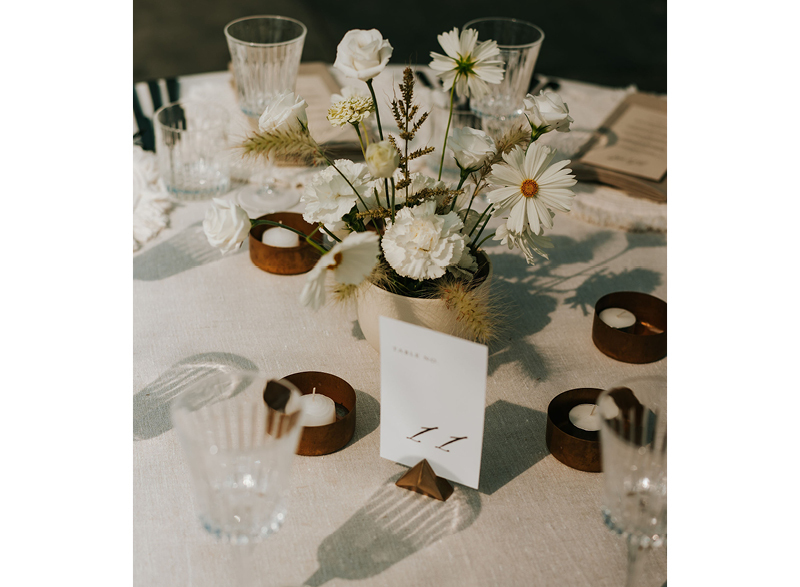 Karine worked with her wedding planner and vendors to create an ethereal and warm wedding vibe. “I wanted it to feel like adult summer camp!” Photos: Joel & Justyna

For the menu, the couple turned to Chef Matt DeMille to create an elevated farm-to-table experience, which also integrated barbecue elements—this couple loves to grill. “We had a tasting menu a few months before and Chef Matt nailed every single course,” says Karine. “For our wedding, we had an incredible three-course meal and a full seafood raw bar—everyone loved it.” 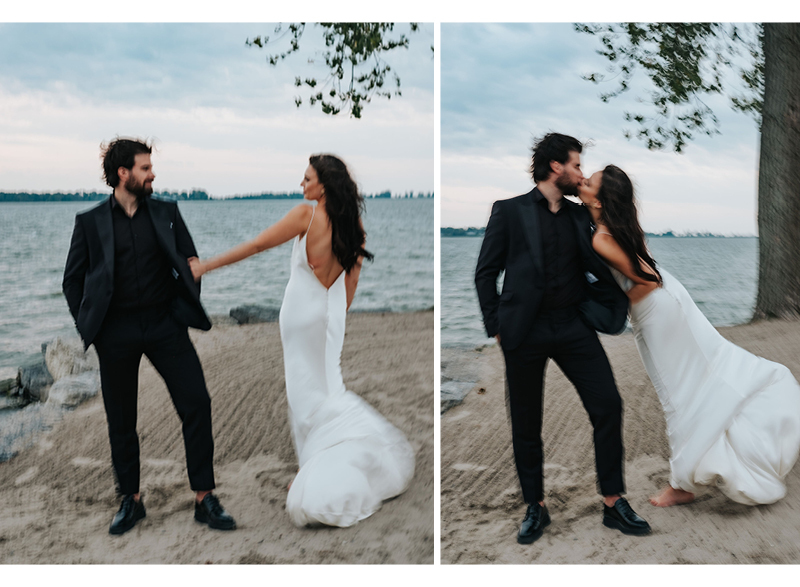 In a day filled with so many incredible moments, Karine says one of the most treasured was her walk down the aisle to meet Chuck. “We had the wildly talented Gareth Bush sing the Noah Reid version of ‘Simply the Best’ from that famous Schitt’s Creek episode,” says Karine. “I still get full-body chills thinking about it.” 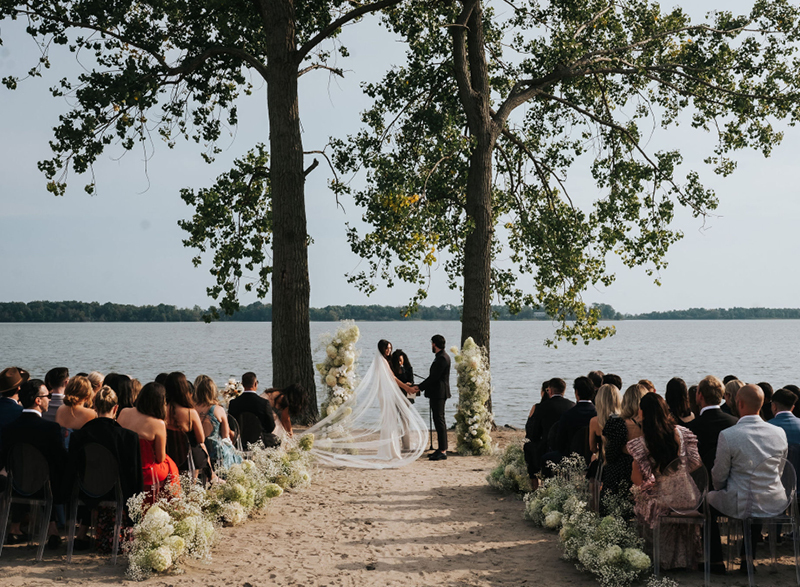 “It was important to me to have an outdoor wedding by the water,” says Karine. “I also wanted it to be somewhere far enough away from the city, so it would be a little getaway for us and our guests.” Photo: Joel & Justyna 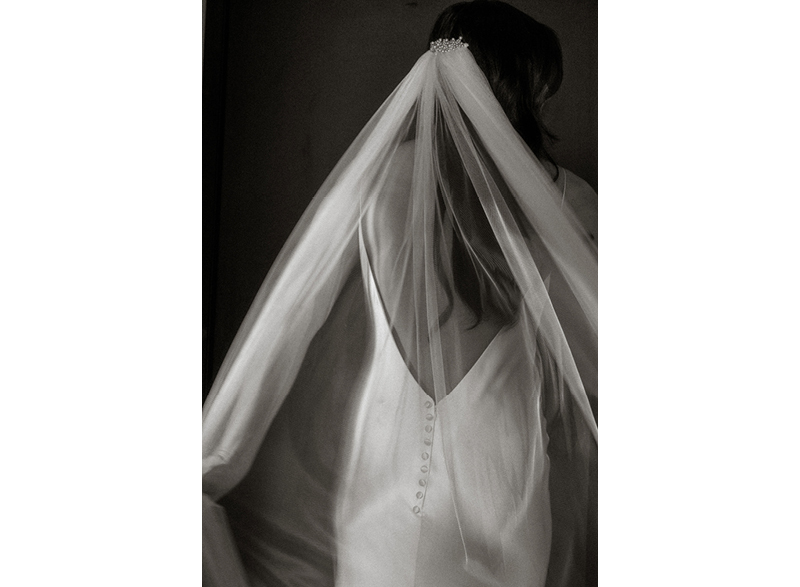 Karine chose an iconic wedding dress style for her day: a bias-cut slip dress by bridal wear designer Savannah Miller (sister of actor Sienna). “I was looking for something simple with a low back, and that’s exactly what I walked out with on the same day I saw it,” says Karine. “I was told you can easily get lost after trying on too many dresses, but I fell for mine immediately.” 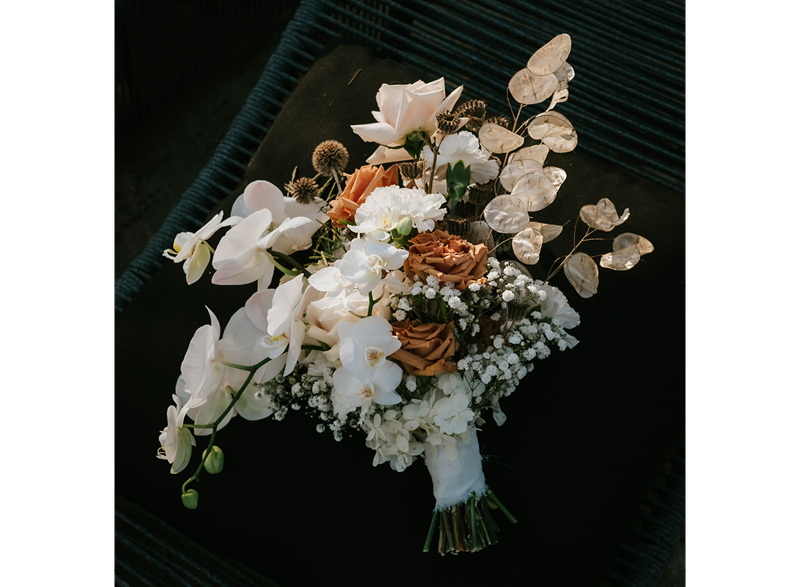 “They were absolutely surreal,” says Karine. “I did not want typical bouquets, and Floralora really nailed the ethereal countryside vibe.” 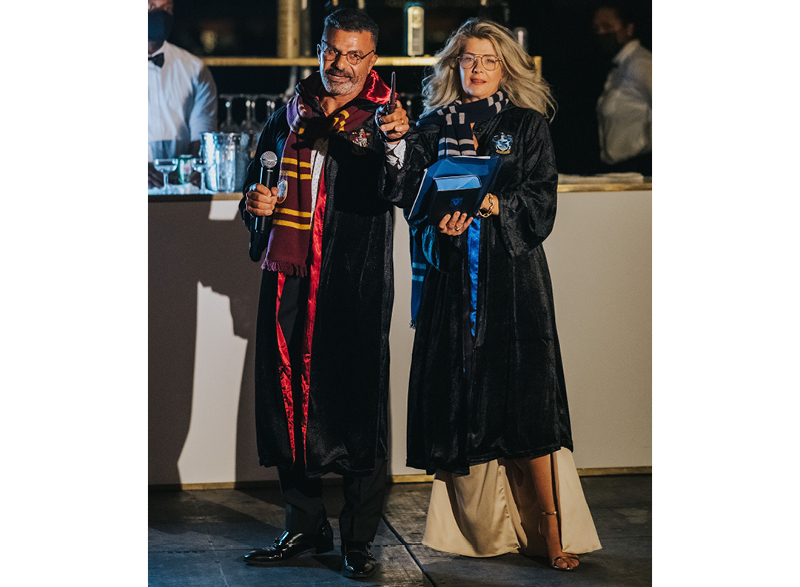 “My parents dressed up as Harry Potter characters for their surprise speech because they know I am such a big fan of the series,” says Karine. “They really outdid themselves! I loved seeing their rehearsals, which my sister had on video and shared with me afterwards.”

Richa Chadha-Ali Fazal dance to Ranjha Ranjha during sangeet ahead of wedding, watch