Anzac Day commemorates the lives of Australian and New Zealand born soldiers who gave their lives in military operations. The 2022 ceremony marks the first public holding of the event since 2019 due to the coronavirus pandemic. In 2019 the Duchess of Cambridge attended the ceremony accompanied by Prince Harry and the queen’s cousin, the Duke of Gloucester.

The outfit chosen for Monday’s ceremony consisted of a white coat dress with matching headpiece, black suede accessories and statement pearl earrings formerly in the collection of Princess Diana. The coat dress holds particular significance for the duchess as it has become one of her most worn pieces and is closely linked to her only daughter, 6-year-old Princess Charlotte.

Kate debuted the piece made by the designer of her wedding dress, Alexander McQueen, at the christening service for Charlotte held at Queen Elizabeth II’s country estate in Sandringham, Norfolk in 2015. It is also the estate on which the Cambridges’ country home, Amner Hall, is situated.

The Duchess of Cambridge followed her recent trend of re-wearing outfits at the annual Anzac Day ceremony in an Alexander McQueen coat dress first worn to Princess Charlotte’s christening in 2015. Kate is photographed (L) at the Anzac service on April 25, 2022, and (R) at Princess Charlotte’s christening on July 5, 2015.
Eamonn M. McCormack/Getty Images/Chris Jackson/Getty Images

Kate followed her recent trend of re-wearing pieces from her established wardrobe. Since returning from her tour of the Caribbean last month, Kate has repeated outfits for the royal Easter Sunday service, a visit to the Disasters Emergency Committee London headquarters, and now, the Anzac Day ceremony.

The coat dress is by no means the oldest piece that Kate has recently plucked from the depths of her wardrobe to rewear. At the 2021 Earthshot Prize awards ceremony the duchess re-wore a dress which she had debuted in 10 years earlier, also by Alexander McQueen, just after having married into the royal family.

On her recent tour of the Caribbean, Kate one-upped this effort by wearing a vintage Yves Saint Laurent jacket from the 1980s when leaving Belize. The duchess bought the jacket while she was a student in Scotland and it has been in her closet for two decades.

The style of Kate’s Anzac Day coat dress particularly appeals to the duchess who has adopted the garment, first popularized for royal women by Princess Diana, with enthusiasm.

The design’s long sleeves, knee length skirt and statement seaming are all typical elements seen in Kate’s coat dress collection, with many made by Diana’s favorite designer, Catherine Walker & Co.

The duchess also possesses an impressive collection of McQueen coat dresses, including at least three identical to the Anzac Day ensemble in different colorways. She wore a pale primrose yellow version to the wedding of Prince Harry and Meghan Markle in 2018, and a duck egg blue version to the Royal Air Force centenary celebrations in 2019. 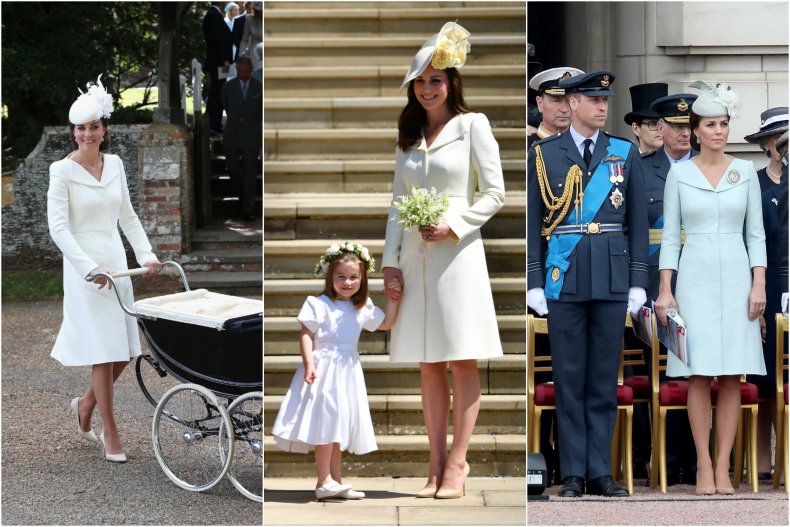 The Duchess of Cambridge owns this particular style of coat dress by Alexander McQueen in three colorways: white, primrose yellow and duck egg blue. Kate is photographed (L) at Princess Charlotte’s christening on July 5, 2015. And (C) at the wedding of Prince Harry and Meghan Markle on May 19, 2018. And (R) at the RAF 100 celebrations on July 10, 2018.
Chris Jackson/Getty Images/Ben STANSALL/WPA Pool/Getty Images/

Another touching inclusion in her Anzac Day outfit came in the form of her earrings which had been presented to Princess Diana as a wedding present in 1981 by the jewelers Collingwood & Co.

Diana wore the earrings until the end of her life and was known to love pearl pieces. Kate now wears many of those pieces, including Diana’s famous pearl and diamond lover’s knot tiara. The duchess last wore Diana’s Collingwood earrings to the service of thanksgiving for the life of Prince Philip at Westminster Abbey last month.

Prince William represented the queen at a special wreath laying ceremony at the cenotaph war memorial in Whitehall earlier in the day on Monday before being joined by Kate for the Westminster service. The order of service included readings from the New Zealand and Australian High Commissioners and a series of prayers read by children from Australia and New Zealand.