Kate Middleton has been a member of the royal family for over 10 years and in that time she has worn a glittering array of Queen Elizabeth II’s most prestigious jewels.

No item of jewelry is more associated with female members of the royal family than the tiara. From a borrowed heirloom of the Queen Mother to a legacy loan of one of Princess Diana’s most famous jewels, Kate has presented a number of key sparkling tiara moments.

Princess Diana was loaned the diamond and pearl “lover’s knot” tiara by Queen Elizabeth II as a wedding present, (L) at a banquet in New Zealand, April 29, 1983. Kate Middleton has worn the tiara numerous times over the years of her marriage (R), photographed at a diplomatic reception at Buckingham Palace, December 4, 2018.
Tim Graham Photo Library via Getty Images/Victoria Jones/WPA Pool/Getty Images

When Kate married Prince William in 2011, the future queen didn’t have a tiara in her own family to wear to the ceremony. So Elizabeth looked into her own jewelry vault to find something for the newest member of the family to borrow. She settled on what is known as the “Cartier Halo Tiara”.

This piece holds special sentimental significance for the Queen. Made by the French fine jewelry house Cartier in 1936, the jewel was an anniversary gift from the Queen’s father King George VI to her mother. The tiara is relatively small, in terms of size and the volume of diamonds it contains, but the elegant scroll-work in graduating waves has made it a favorite among royal women. 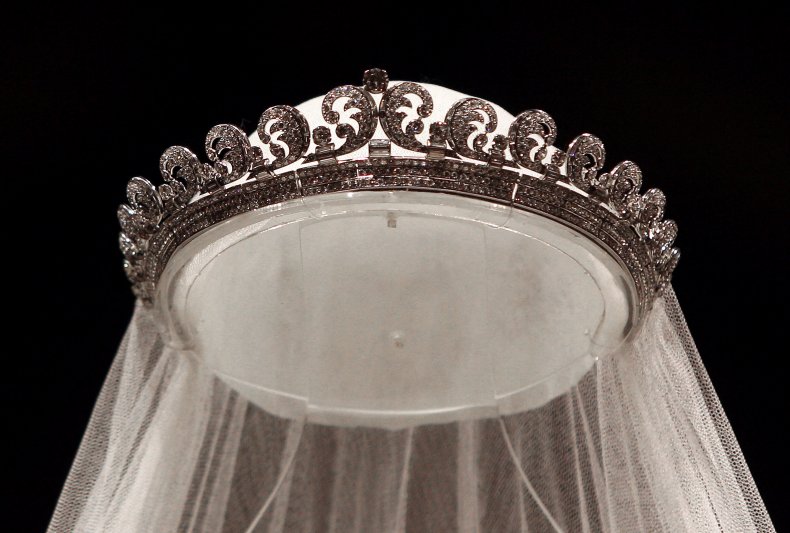 The Cartier Halo tiara was a gift from King George VI to his wife as an anniversary present. It was given to Queen Elizabeth II as an 18th birthday present. Kate Middleton was loaned the piece on her wedding day in 2011 and it was displayed at Buckingham Palace that same year. Photographed in the royal wedding dress exhibition at Buckingham Palace, July 20, 2011.
LEWIS WHYLD/POOL / AFP

Throughout history tiaras were only ever worn by married women. This was for two important reasons. The first being a conspicuous way of showing off a husband’s wealth. The second and most important reason was that it let any single man in a crowded ballroom know which ladies were unmarried.

For royal women this tradition didn’t apply as they would be expected on some occasions, such as coronations, to wear tiaras. As such the Queen was given the Cartier tiara by her parents as an 18th birthday present. There are no photographs of her ever wearing this tiara but she lent it for many years to her sister, Princess Margaret.

Kate wore the tiara proudly on her wedding day with her dress and veil by designer Sarah Burton for Alexander McQueen. After the wedding the dress went on display, along with the tiara, in the ballroom at Buckingham Palace. The Queen, however, wasn’t a fan of the way the exhibition was mounted. The dress was displayed as if it was being worn with the tiara and veil floating above an absent head. She was filmed viewing the exhibit with Kate, telling her “It’s horrid, isn’t it? Horrible, it’s dreadful. It’s made to look very creepy.”

From her wedding day Kate has attended a handful of royal occasions where wearing a tiara has been necessary. Her first post-wedding tiara outing was to the state banquet given for the president of China in 2015. 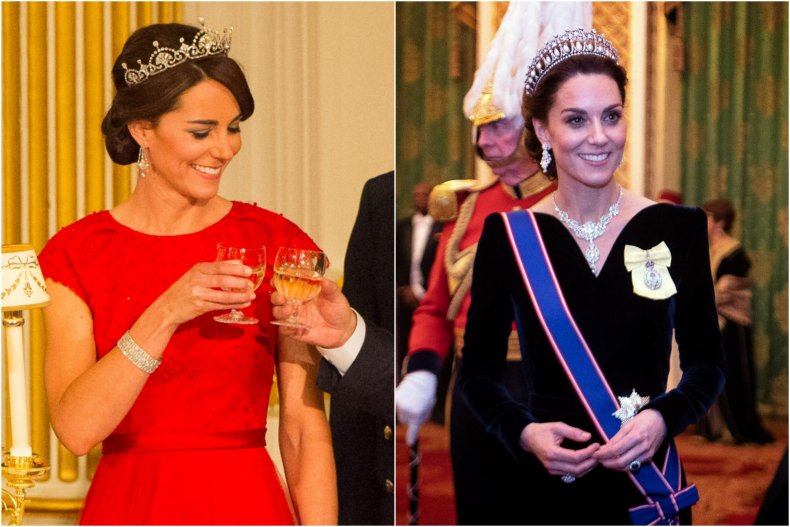 On this occasion Kate wore another tiara borrowed from the Queen which had belonged to the Queen Mother. The “Lotus Flower” tiara was made from a necklace given to the Queen Mother as a wedding present. She loaned it to Princess Margaret in the 1950s and she continued to wear it throughout her life.

When the Queen Mother died in 2002, she left all her jewelry to the Queen who has since loaned pieces to Kate and other members of her family.

For subsequent tiara occasions, Kate has worn the jewel made famous by her mother-in-law, Diana. When she married Prince Charles in 1981, Diana was loaned as a wedding present the use of the Queen’s pearl-and-diamond “lover’s knot” tiara, which became synonymous with some of Diana’s most iconic looks.

The tiara was worn most recently by Kate at the state banquet given in honor of the King and Queen of the Netherlands during their 2018 state visit.

Kate attaches sentimental meaning to her jewelry which is evident in the touching ways she wears pieces formerly belonging to Princess Diana, notably her engagement ring, to important family events at which the princess is sadly absent. Through wearing the tiara formerly in Diana’s collection, Kate brings the memory of her mother-in-law into the modern age and she sparkles while doing it. 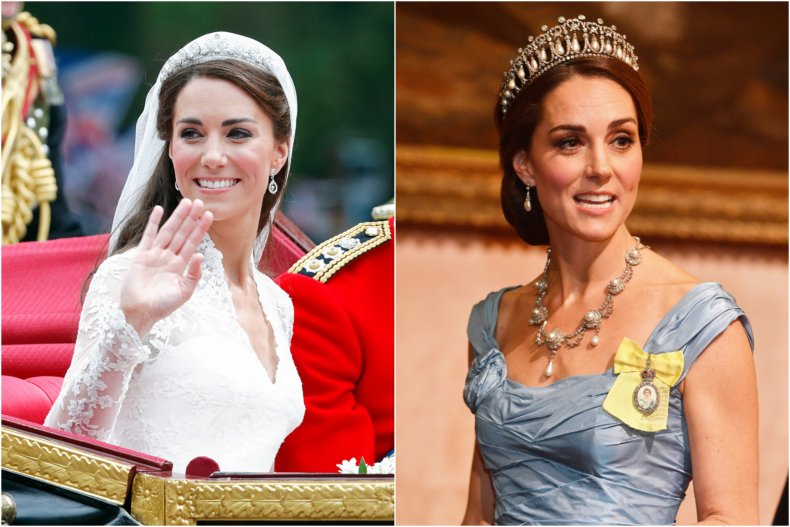 Kate Middleton has been loaned some of Queen Elizabeth II’s most prestigious jewels during her marriage – none so important as a collection of the monarch’s favorite tiaras. Photographed (L) on her wedding day to Prince William, April 29, 2011. (R) at the state banquet for the King and Queen of the Netherlands at Buckingham Palace, October 23, 2018.
Max Mumby/Indigo/Getty Images/John Stillwell/WPA Pool/Getty Images