First, it was Paris and Nicky. Then their aunts Kyle and Kim. Since the early aughts, a niche slice of the pop culture conversation—not to mention prime tabloid real estate—has been dominated by a pair of sisters in the Hilton (or its extended) family.

It’s actually a curiosity that it has taken her so long to claim her rightful place in the spotlight. With all due respect to Kris Jenner, Kathy Hilton may really be the true OG power matriarch when it comes to a certain class of 21st century media personalities. And her debut on the Real Housewives of Beverly Hills last season was incontrovertible proof that her self-restraint all this time was by design—producers, and even Kyle Richards (RHOBH queen bee and Hilton’s half-sister), had been trying to get her on the show for years—and most certainly not for lack of charisma. She is practically dripping in it—her refreshing authenticity and unfiltered quirk turned her into such a universally worshipped breakout star of the Bravo franchise they wasted no time in convincing her to sign on for season 12, though not without, if the rumors are true, having to fork over a lot more money (See? OG). 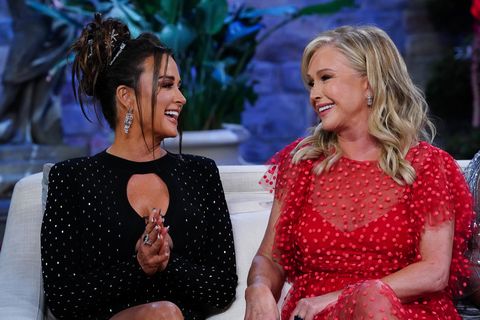 Kyle Richards and Kathy Hilton at the RHOBH Season 11 reunion.

Elsewhere in the vast and verdant universe of reality TV, Hilton is currently in Paris in Love. Unless you’ve been living in some sort of self-imposed internet and Instagram blackout, you would know that Paris Hilton recently got married. It was a three-day extravaganza in L.A. with countless custom Oscar de la Renta dress changes, a neon-lit bacchanal at the Santa Monica Pier, and two nights of parties at the $62 million Bel Air estate that once belonged to Barron Hilton. You would also know that the whole planning process, from engagement to ceremony, had turned into a 13-part docuseries now streaming on Peacock, with new episodes dropping every Thursday. 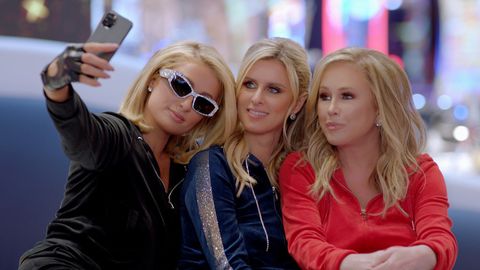 Paris, Nicky, and Kathy Hilton in Las Vegas for the bride’s bachelorette party.

And once again, Kathy Hilton is the breakout star. “I didn’t realize how much I’d be in it,” she tells T&C over a Zoom call from her Bel Air home, her iconic Christmas tree twinkling in the background. “I thought I’d maybe work 5 days. And then the network said, ‘Oh my God, we love this dynamic.'” Judging from the first half of Paris in Love, this could just as well be the Paris, Nicky, and Kathy Show and still be plenty entertaining.

But like all good TV, narrative tension is paramount. Here, yet again, Kathy Hilton delivers: The running storyline has been the battle royale brewing between her and her son-in-law Carter Reum. In brief: the mother of the bride believes it is absolutely in her right to take charge of all wedding planning, from invitation designs to catering to flowers. After all, it is her checkbook. Groomzilla, on the other hand, has too many ideas of his own. On more than one occasion she likens him to an octopus. 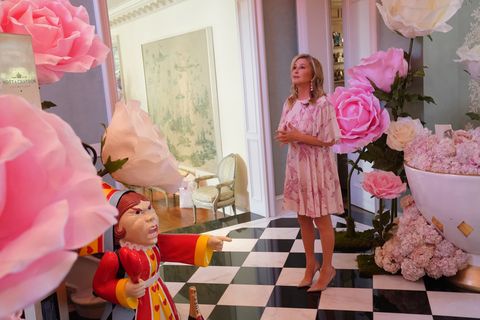 Kathy Hilton in Paris in Love.

“I thought I was being punked, I really did,” Hilton says. “I am the mother of the bride. This is like my wedding too. He is trying to help but I don’t need his help. I’ve done enough parties—I’m known for my parties.” Now they are on excellent terms: “The minute we clinked our glasses and took that first sip of that Moët & Chandon we were like, ‘Ok, we’ve done it.'” And she is enjoying reliving every moment: “It’s so interesting to watch yourself with your kids like that and to have all these memories on film,” she says. “It was a wild ride.”

It is exactly this balanced cocktail of unfettered honesty, zero tolerance for bullshit, acute self-awareness, and perspective that so endears Hilton to her ever-expanding fan base, which includes, at last count, more than 900,000 followers on Instagram. It’s not for nothing that her daughters call her the IG, which is short for Instant GOAT. As in, the Greatest of All Time, not the farm animal (which is what Hilton initially thought it meant).

Watch Paris in Love on Peacock

Leena Kim
Associate Editor
Leena Kim is an associate editor at Town & Country, where she writes about travel, weddings, arts, and culture.