From the red carpet to the wedding aisle! Katie Holmes’ romance with Bobby Wooten III continued to heat up when they attended his close friend’s nuptials in Montauk, New York.

“Katie spent time with Bobby’s family, who really liked her. Katie was very unassuming and kind to everyone” an eyewitness exclusively tells Us Weekly, noting the Dawson’s Creek alum, 43, took sweet snaps as the musician, 33, walked down the aisle as the best man on Saturday, June 25.

After the vows were exchanged at the Church of St. Therese of Lisieux, Holmes accompanied Wooten to the reception, where they couldn’t help but pack on the PDA.

“Whenever they would go without seeing each other, they would kiss and be very happy to be together again,” the insider adds. “Katie and Bobby were very affectionate with each other at all times; they looked very in love and didn’t care who saw.”

Throughout the night, the Ohio native danced with her beau in an “adorably sultry way” before speaking with his family while he attended to various wedding duties.

“Katie seemed to be carefree the entire night and very much in love with Bobby,” the source adds. The Ray Donovan alum was “having fun” throughout the festivities, but she “never tried to steal the spotlight” and “really let the bride shine” on the big day.

Holmes was first spotted with the America Learn Your History founder earlier this year, when they were photographed kissing in New York City. The pair sweetly held hands as they walked to Guggenheim Museum and around Central Park in April.

The First Daughter star and Wooten’s romance continued to blossom as they made their official red carpet debut at last month’s The Moth’s 25th Anniversary gala, The Silver Ball. 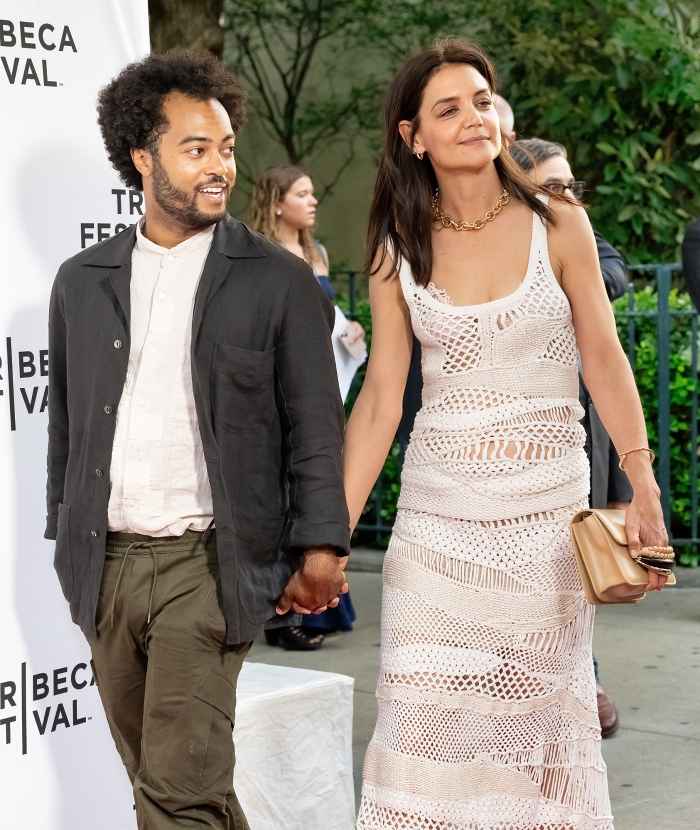 “I’m happy to have [Katie] here as my date,” the Broadway veteran exclusively told Us Weekly on the carpet in May. “I’m so excited to be here for [honoree] David [Byrne]. He’s impacted my life like crazy so it’s quite easy to speak on everything he’s done for me.”

Weeks later, the pair were all smiles as they stepped out at the Tribeca Film Festival premiere of her forthcoming film, Alone Together, earlier this month. Holmes wore a crochet tank top and matching skirt as she held hands with her boyfriend.

Prior to her relationship with Wooten, the Batman Begins actress was married to Tom Cruise for six years ahead of their 2012 split. She later moved on with Jamie Foxx and chef Emilio Vitolo.

With reporting by Travis Cronin

Listen to Us Weekly’s Hot Hollywood as each week the editors of Us break down the hottest entertainment news stories!

Does this mean I’m not invited to the wedding?