While many people waste away time in clueless, distracting activity, Lexington author Georgia Green Stamper observes — and takes careful notes. If one needs proof of such, look no further than her latest book, Small Acreages: New and Collected Essays.

I’ll characterize her work as a series of memoirs, each saying something of universal value; each offering is worthy, both connecting and teaching. Essays with heart and folksiness, for sure, and done with excellent craftiness.

And one might rightly say that her reflections began in earnest while she was growing up an only child on a small farm in the tiny community of Natlee, in Owen County. That’s where, she says, “the wise country people who raised me continue to remind me to pause and laugh at myself and the world in order to remain sane.” For Georgia’s writing, it seems, all roads lead back to Natlee and kin, and that’s usually good writing fodder for her.

Take “Lost and Found,” which deals with a misunderstanding between Georgia and her single-mother daughter. Mom supposedly gave to Goodwill a bowl-with-flowers-on-the-sides-that-beloved-Uncle Bo-gave-daughter-for-a-wedding-gift, and that caused consternation. How could Mom, such a protector of all things family, do such a thing? Fortunately, the daughter forgave the mother, and ironically, before it was discovered that the particular gift feared lost to Goodwill had not been lost at all, but rather a cheap and tacky one instead.

In “Our Quilts,” Georgia shows us that our family works of craftmanship should not only be kept as heritage treasures but should be available around the house for all to see, and perhaps to be functional. Even better, those handicraft dandies might become avenues of conversation with long dead kin. 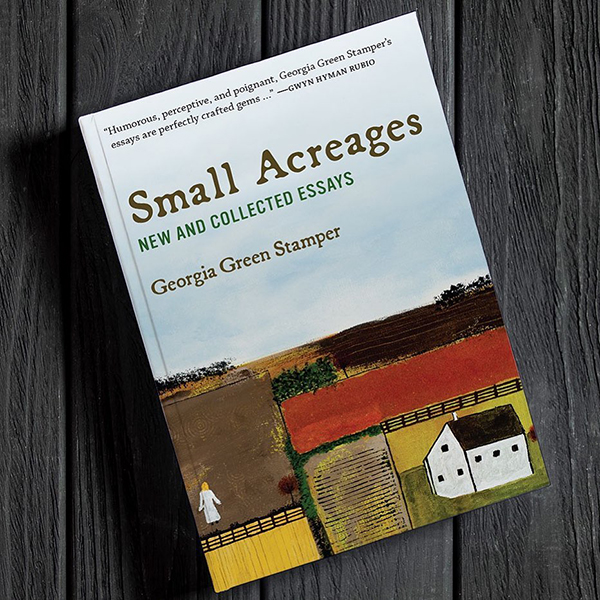 We are introduced to the colorful cousin by marriage, Mae, a Canadian, though it might be best not to repeat “outside this house,” according to Georgia’s grandfather. Something or the other about her standing up and calling the family gathering “The Hudson-Jones Reunion” might have had something to do with it. Though quite well-liked, Cousin Mae was “not quite in tune with our Southern Kentucky ways.” Ol’ Mae made her eternal mark with Georgia’s folks, however.

Then there was Georgia’s childhood adventure at the old Good Samaritan Hospital, in Lexington. “Father’s Day 1954” is the riveting story of being sneaked by her father into her dying grandfather’s hospital room to deliver a card. He was sleeping when she arrived and died soon afterward, denying young Georgia the blessing of his personal response. It is a poignant recollection, and for anyone who didn’t have the chance to say a final goodbye to a special loved one, this one will touch you closely.

Steve Flairty is a teacher, public speaker and an author of seven books: a biography of Kentucky Afield host Tim Farmer and six in the Kentucky’s Everyday Heroes series, including a kids’ version. Steve’s “Kentucky’s Everyday Heroes #5,” was released in 2019. Steve is a senior correspondent for Kentucky Monthly, a weekly NKyTribune columnist and a former member of the Kentucky Humanities Council Speakers Bureau. Contact him at sflairty2001@yahoo.com or visit his Facebook page, “Kentucky in Common: Word Sketches in Tribute.” (Steve’s photo by Connie McDonald)

The best way to make sense of the “Uncle Murf” memoir is that the man was both inspiring and perplexing. What about a man who “cheated death on the Western Front in World War I,” then decades later “stood trial in Owen County, Kentucky, for attempted murder”? And let’s not forget that Uncle Murf “made the best brown sugar fudge I ever ate,” Georgia writes. Humans can be a complicated mix of gray matter and emotions. Murf is an example.

And what do you do with a couple of bored and restless grandchildren sitting in the back seat on a long road trip? One measure won’t work for sure, and that’s playing Tom T. Hall’s Greatest Hits on a compact disc for the young’uns wise teaching lesson. If you’re looking for an on-target description of generations navigating the challenges of owning different agendas, you’ll love “I’d Give a Hundred Dollars.”

One of my favorite lines, a humorous one, comes from “Jam Cake,” with Georgia’s fantasizing–“back in the days when I still had hope of becoming trim”–about what would make up a last meal served to people on death row. She knows what her meal would include, writing: “Oh, no, had I been Eve, the Devil would have introduced original sin into the world with a blackberry jam cake slathered in brown sugar icing.” Disarming prose of that nature is abundant in her work.

The author cultivates lots of human acreage throughout (the title is borrowed from a line in Wendell Berry’s The Art of the Commonplace: The Agrarian Essays, 2002). I’ve shared only a few teasingly tillable examples.

Taking note of some fifty-eight essays in all, I give Georgia, a former schoolteacher, a solid “A” for her clear and down-home, yet well-drawn characterizations of persons and places. It’s not a stretch to call her a master of this genre, and she has a passionate feel for it demonstrating a truly authentic voice. You get the notion real fast that Small Acreages is something special.

One may pre-order the book for its May release from the publisher. After the initial release, it will also be available in regional bookstores such as Joseph-Beth Booksellers and Barnes and Noble.