Kourtney Kardashian is currently in engagement bliss with her fiance Travis Barker. In October, he popped the question on a beach in Montecito, California. There was champagne and red rose petals in the sand. It sounds like something out of a movie. Except that’s the couple’s life.

They’ve been on a whirlwind romance ever since they started dating. Kourtney and Travis have been together for about a year. Decades ago, the two were good friends who ran in the same Hollywood circles. Ever since they reconnected, they decided to take their relationship to the next level.

Kourtney reportedly has their wedding guest list on her mind. She already knows who is not getting an invite.

Scott Disick will be a no-show at their wedding

Kourtney Kardashian and Travis Barker have been reportedly going through the guest list. The 42-year-old doesn’t want her ex-boyfriend there on her special day. She feels that it would ruin the vibe. It’s interesting that Kourtney doesn’t want to invite the father of her children.

“Kourtney is of the mindset that she is going towards her future, and the past with Scott shouldn’t be there on her special day,” an insider told Hollywood Life. “[The] likelihood of Scott being a part of Kourtney’s wedding in any way is pretty nonexistent.”

A second source added that the Poosh founder doesn’t think it would look right. Travis and Kourtney Kardashian wouldn’t feel comfortable with having Scott there as they exchange their wedding vows. Scott supposedly said he “would never go in a million years,” even if he was invited. Kourtney thinks it’s risky to invite the Talentless designer since he’s “so unpredictable.”

Kourtney and Scott ended their relationship in 2015. The couple was on-and-off for about a decade. They share three children Mason, 11, Penelope, 9, and Reign, 6. Yet, they never got married. While Scott is reportedly not happy about the engagement news, the Kardashian-Jenner clan are “super happy” for Kourtney and Travis.

Kourtney Kardashian and Scott Disick recently reunited at Simon Huck’s wedding to Phil Riportella. Last weekend, she attended the event with her fiance. Scott tried to be cordial and even said hi to Kourtney and Travis. Still, he “kept his distance for the majority of the night.” That wedding was the same event where Kourtney straddled and dry humped her fiance.

“He doesn’t want to see Kourtney and Travis’ PDA and doesn’t want to engage,” an insider told E! News before adding, that “it’s still very awkward for Scott to be around them. But he knows he can’t escape them.” 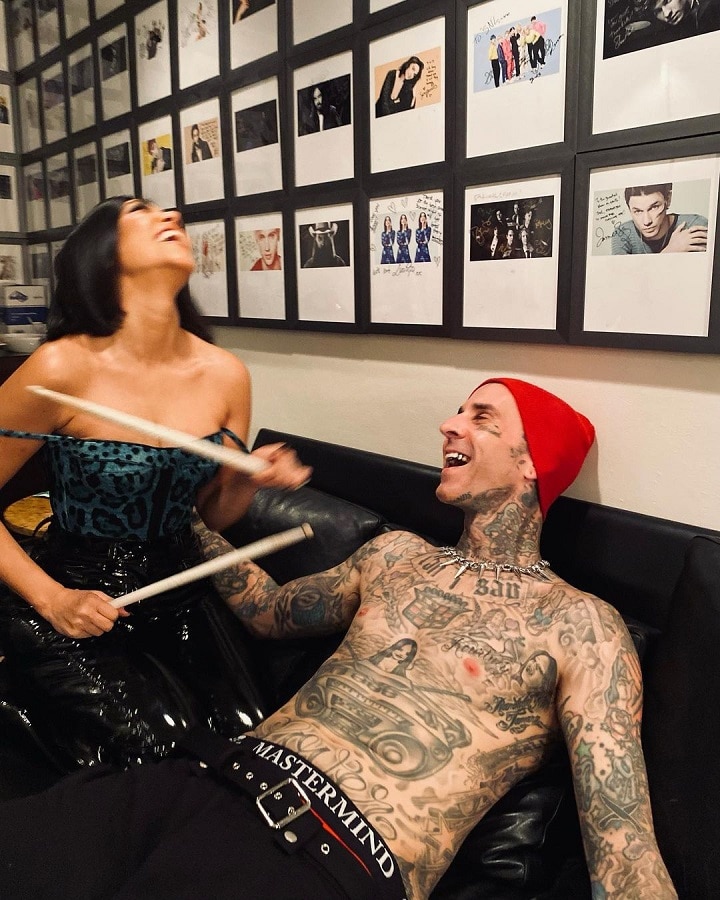 [Credit: Kourtney Kardashian/Instagram]The celebrity guest list included Khloe Kardashian, Kim Kardashian, and their mom Kris Jenner. It was easy for Scott to occupy himself since his friends were also there. He also spent most of his time with Kris and Khloe. The source added that Scott was “sitting and cheating with friends and wasn’t drinking or partying much.”

Kourtney Kardashian tends to avoid run-ins with her ex. But Scott is usually nice to Travis since he doesn’t want to start trouble with him. What are your thoughts on Scott not being invited to Kourtney’s wedding? Sound off below in the comments.

Check back with TV Shows Ace for more news on Kourtney Kardashian.

Chanel Adams is addicted to reality TV. She’s been writing about entertainment and pop culture since 2006-07. She’s glad she never became famous because she would never want to be in the tabloids.