Instead, I dried the arrangement and it’s now on display at home. I felt less guilty keeping it knowing the bouquet toss stemmed from a weird tradition where single ladies would chase the bride and try to rip a piece of her dress as a lucky keepsake. To get away, the bride would throw her bouquet and run.

Without a garter to fulfil the “something blue” requirement, it was tricky to complete the Victorian-era tradition of “something old, something new, something borrowed, something blue”. But looking into the origins of the rhyme, I learned that brides often fell short of the lucky ritual without the lesser-known final item “… and a tuppence in her shoe”. I was happy to tempt fate and give that tradition the boot.

Then there’s the iconic white dress as a symbol of purity. I learned that it’s only a relatively modern tradition, with Queen Victoria setting the trend in 1840 when she wed Prince Albert. Before that, brides wore what they considered their best dress in any colour. I settled for a cream lace frock.

We decided on bridesmaids and groomsmen because I knew I would need help managing my anxiety in the lead-up and on the day. For the groom, the support was more to calm his nerves and make sure he got to the ceremony on time.

However, the purpose of the bridal party once played a more sinister role. According to ancient superstition, bridesmaids acted as decoy brides to confuse evil spirits and to intervene if jilted ex-lovers tried to stop the wedding or steal the bride’s dowry. 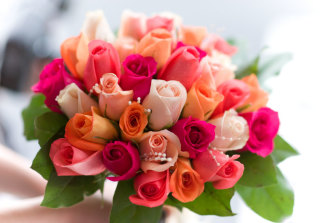 The bouquet has become a wedding tradition.

The job of a best man, on the other hand, was to chase down the bride if she did a runner, particularly in the times when arranged marriages were the norm. The best – or biggest and strongest – man was chosen for his capability of such a task. At five foot six, our best man wouldn’t have been the obvious choice for this assignment.

One tradition we kept was to avoid seeing each other before the ceremony. Not because it was bad luck, but because I wanted to enjoy the experience of getting ready with just the ladies and to avoid fussing over the blokes before the big day.

Then there was the throwing of confetti or rice to symbolise fertility. My husband and I have been vocal about not wanting kids, but we thought bubbles would look nice in the photos. To keep things COVID-safe, we gave out bubble guns to two friends instead of floating bubbles filled with people’s breath.

And when it came to our processional and recessional songs, there was no Here Comes the Bride or At Last by Etta James.

Instead, our nuptials were bookended by Elvis and punk band Rancid. An unlikely combination, but for our spin on tradition, the pairing was somehow perfect.

Mel Buttigieg is a freelance writer.