When Desi Arnaz first set eyes on Lucille Ball in the commissary of RKO Pictures in Hollywood in early 1940, it was not an auspicious beginning to their relationship.

The Cuban bandleader turned fledgling actor made a derogatory remark about the then-B-movie actress’ appearance. “He wasn’t impressed at all, calling her a ’10-cent whore,’ a ‘p–a’ — the Spanish word for prostitute,” author Darwin Porter told The Post, noting that the 28-year-old Ball, five years older than Arnaz, was dressed for a role as a cheap burlesque dancer in the film, “Dance, Girl, Dance” with Maureen O’Hara.

Later that day, Ball re-emerged in a more elegant yellow sweater, beige pants and heels, with her hair perfectly set.

Lucille Ball and Desi Arnaz, who eloped in 1940, had plenty of passion, but not enough faithfulness. Bettmann Archive

Still, the couple — who would a decade later become immortalized as the wholesome Ricardos in the groundbreaking sitcom “I Love Lucy” — continued dating other people, almost up until their November 1940 nuptials.

Arnaz allegedly shuttled Ginger Rogers — “presumably” pregnant with his child, Porter said — across the border to Canada for a late-stage abortion mere weeks before the wedding. Meanwhile, Ball had dalliances with a local politician she met in Milwaukee while on a press tour, and was still carrying on a fling with Henry Fonda that started in 1939, Porter said.

“It [was] getting baroque,” said Porter, adding that the slapdash wedding was on the whim of the “impulsive” Arnaz. 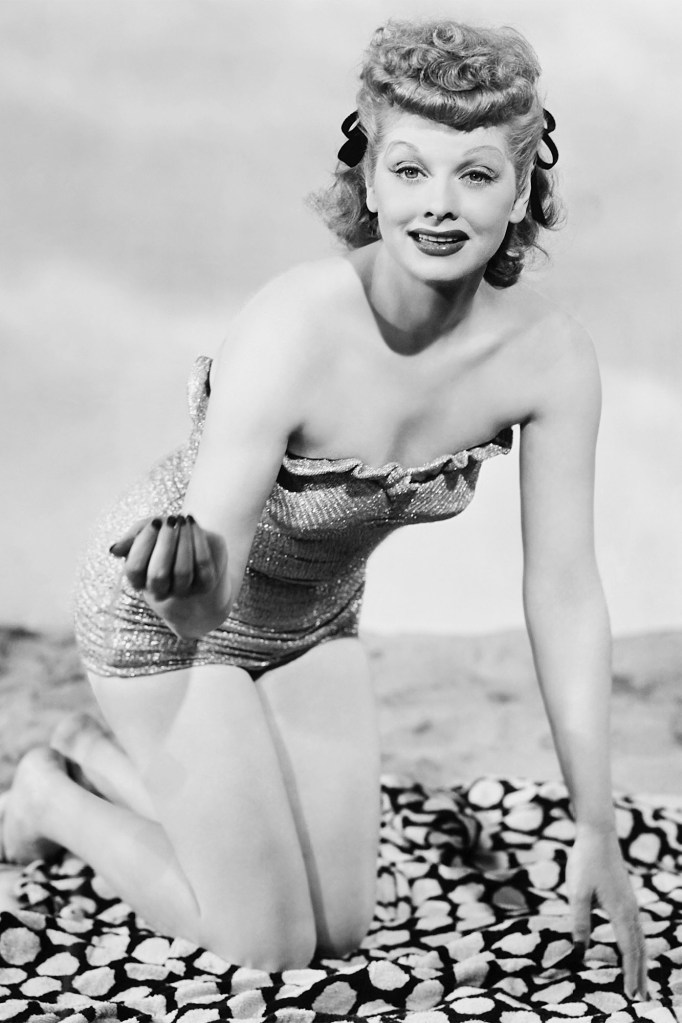 Before the groundbreaking sitcom, “I Love Lucy,” Lucille Ball was a struggling B-list actress who needed a hit.Everett Collection / Everett Col

“One morning, after a night of heavy sex, apparently, he woke her up at 6:30 and said, ‘We’re getting married.’ ” He blew off his matinee show at the Roxy in NYC and they drove to Greenwich, Conn., for an elopement without any friends in attendance or even a white wedding dress. When the newlyweds returned to the city later that day for a meeting with RKO president George Schaefer, Arnaz forgot to zip up his pants. Without missing a beat, Ball zinged, “George, Desi believes in advertising.”

Indeed, almost nothing about the beloved fictional “I Love Lucy” couple was real. Their charming, innocent relationship was created just for the show, in which Ricky, a burgeoning bandleader, and Lucy, a madcap housewife, bantered and butted heads for laughs.

Now, the new movie “Being the Ricardos,” starring Nicole Kidman and Javier Bardem, in theaters Friday and streaming on Amazon Prime Dec. 21, shines a light on the real-life pair. Married for 20 turbulent years, they suffered humiliating indignities, including public infidelities and, as highlighted in the film, FBI scrutiny on Ball for communist sympathies that threatened to torpedo her career.

The tempestuous union was rocky from the start: During the first week of married life, Arnaz allegedly visited Polly Adler — then the most famous madam in New York. “He seemed to have a predilection to ‘p–as,’ whores,” said Porter, adding, “When Desi entered the marriage, he said, ‘Your wife is one thing and you respect and love your wife, but these peccadillos a man has on the side are meaningless.’ Of course, Lucille did not agree.” 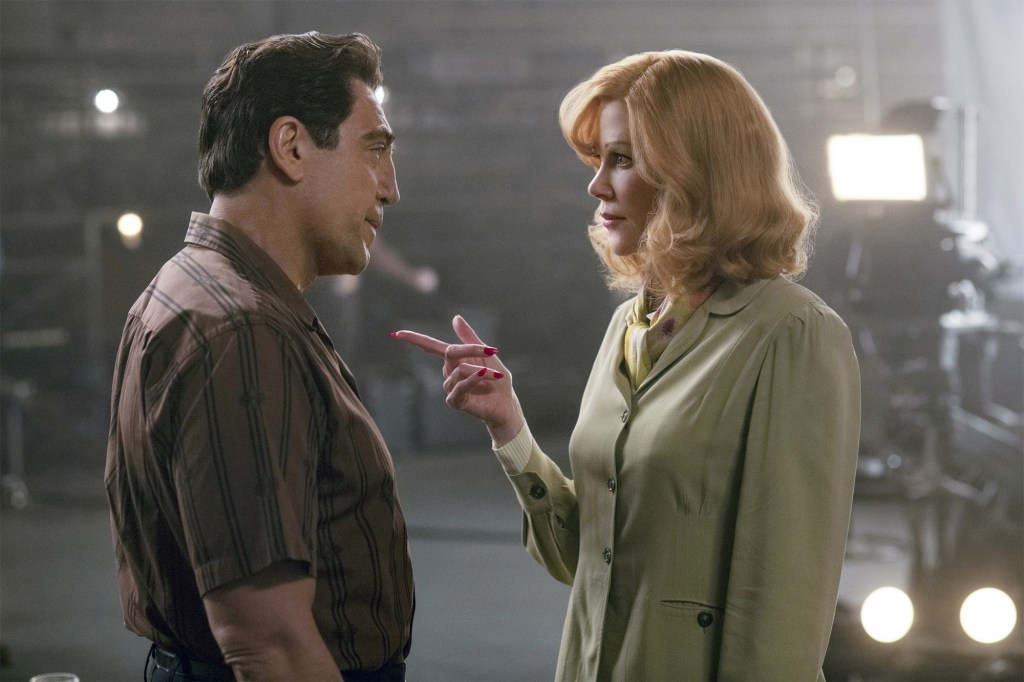 But Ball was far from faithful herself, continuing her flings with Fonda and others. “She started out as ‘the Jamestown Hussy’ [a nickname] at 16,” said Porter of Ball’s formative years in upstate New York. “Lucille really liked men. She’d say, ‘I’m always falling in love, I can’t help myself.’ ” Said to have a voracious sexual appetite, the affairs were as much for lust as they were to get back at Arnaz for his legendary romps. The dalliances and distrust defined their relationship.

“They were never Lucy and Ricky Ricardo,” said Porter.

Thankfully, it never got physical. “They weren’t Richard Burton and Elizabeth Taylor beating the hell out of each other, but they would go to the brink emotionally — calling each other names and throwing objects,” he said.

Ball even filed for divorce in 1944, which some believe was a tactic to show him that she meant business. “He knew the way to prevent the divorce would be to go home and throw her into bed,” said Porter. The divorce was called off immediately.

“They had their mad love affair, and sex had a great deal to do with their relationship,” said Porter, adding that Ball would later gush to “I Love Lucy” co-stars Vivian Vance and William Frawley about their “great sex. She always bragged on her Cuban stud. And he thought she was a ‘hot little number.’ ”

Despite the theatrics at home, Ball’s career was stalling. 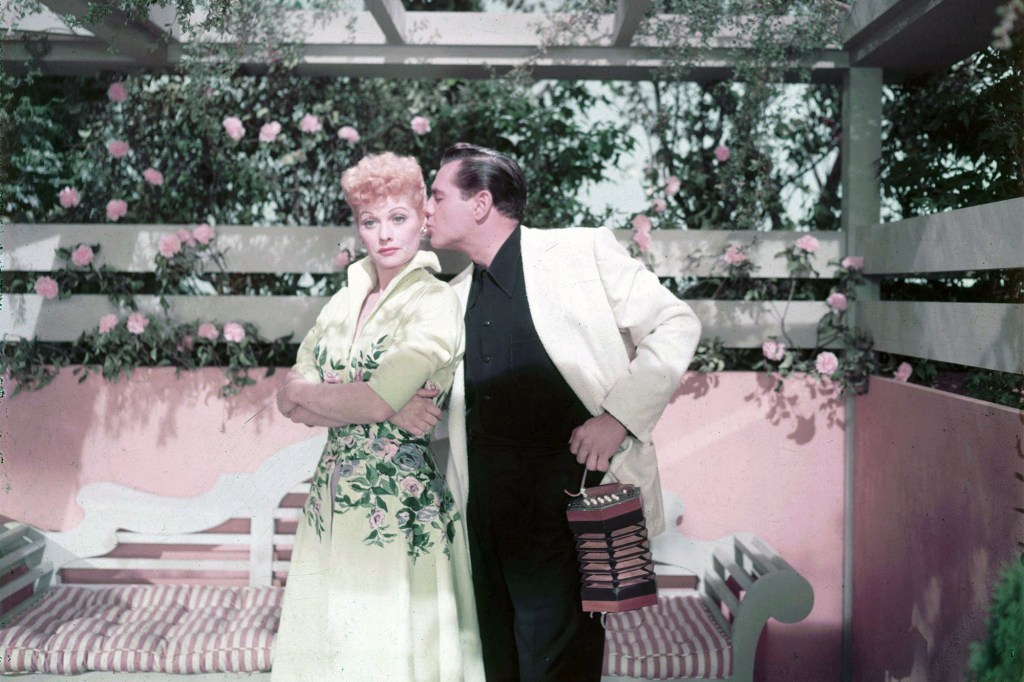 Lucille Ball filed for divorce in 1944, but Desi Arnaz knew how to win her back: “Go home and throw her into bed.” The couple’s sex life was the glue that held them together. Getty Images

After a successful run with her radio program, “My Favorite Husband,” during which Ball cultivated her comedy chops, CBS offered the actress the gig of a lifetime, the television series “I Love Lucy,” but with a catch: They wanted her former co-star, Richard Denning, to play her husband.

Ball needed the show. “She was a B-movie actress, and even that was on the rocks — the show was her last chance. She was fired by RKO and her career was on its last legs,” said Darin Strauss, author of the novel, “The Queen of Tuesday.”

Ball wanted CBS to cast Arnaz over Denning, but the studio was skittish on portraying a mixed-race marriage between a white woman and a Cuban man. But the indefatigable Ball wouldn’t back down, both for personal and practical reasons. “She knew he would cheat if he wasn’t around,” said Strauss. “She said, ‘If I’m doing the show and he’s out touring, the marriage will never last.’ ”

Ball prevailed and her real-life husband got the gig. Unfortunately, keeping Arnaz close didn’t work. “He cheated anyway,” said Strauss, adding that, in a larger sense, the casting was a positive progressive development for the country. “I think it really helped America in its race relations — the most popular marriage in America was between a white woman and Cuban man.” 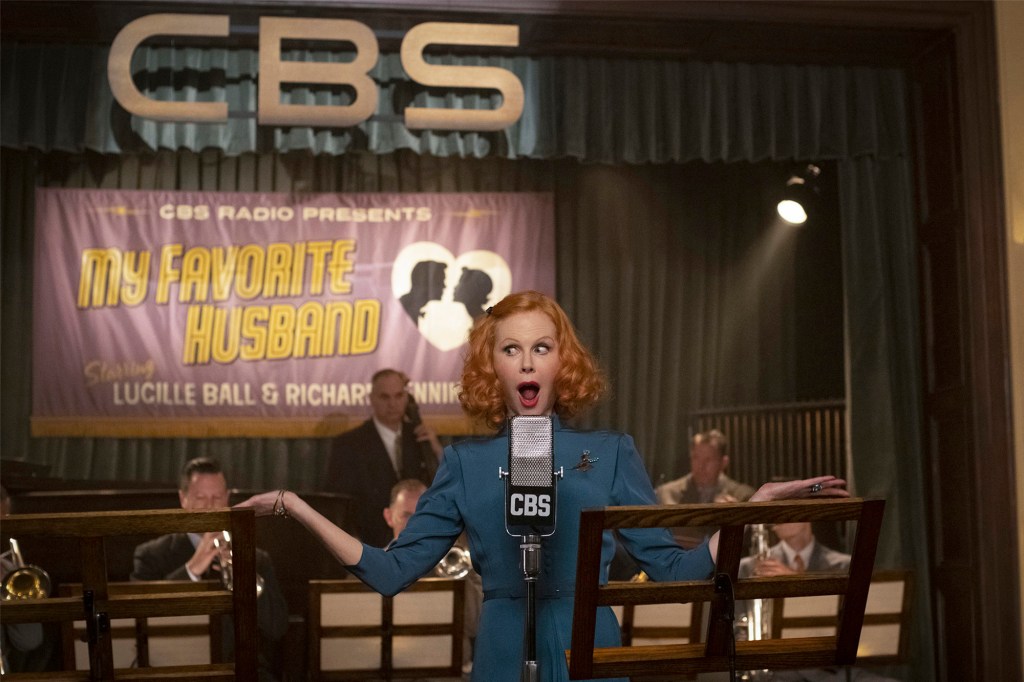 Nicole Kidman portrays Lucille Ball during an investigation into her past Communist ties, a storm she weathered as the comedienne’s star was on the rise.Glen Wilson/ © 2021 Amazon Cont

The show saw meteoric success in its six seasons from October 1951 through May 1957, and Ball became America’s indomitable sweetheart. But the Red Scare that gripped the country had its most popular star in its crosshairs. The notorious House Un-American Activities Committee that investigated communism in Hollywood and beyond questioned the actress in April 1952 and September 1953.

When she was outed by radio personality Walter Winchell, Ball held a press conference explaining that she had registered for the Communist Party in 1936 to appease her socialist grandfather. But Strauss said that the sympathies were indeed real, with Ball hosting communist meetings in her house in the ’30s and voting twice for a socialist candidate. Strauss said her Depression-era political leanings “changed as she got older, married Desi, and became a very successful businesswoman and capitalist,” but nevertheless, her past caught up with her.

But while a lot of careers crumbled under lesser allegations, “she was so beloved, people just bought her excuse, and there really wasn’t that much of an investigation,” said Strauss. “Desi came out and joked, ‘The only thing red about her is her hair — and even that’s not real.’ ” 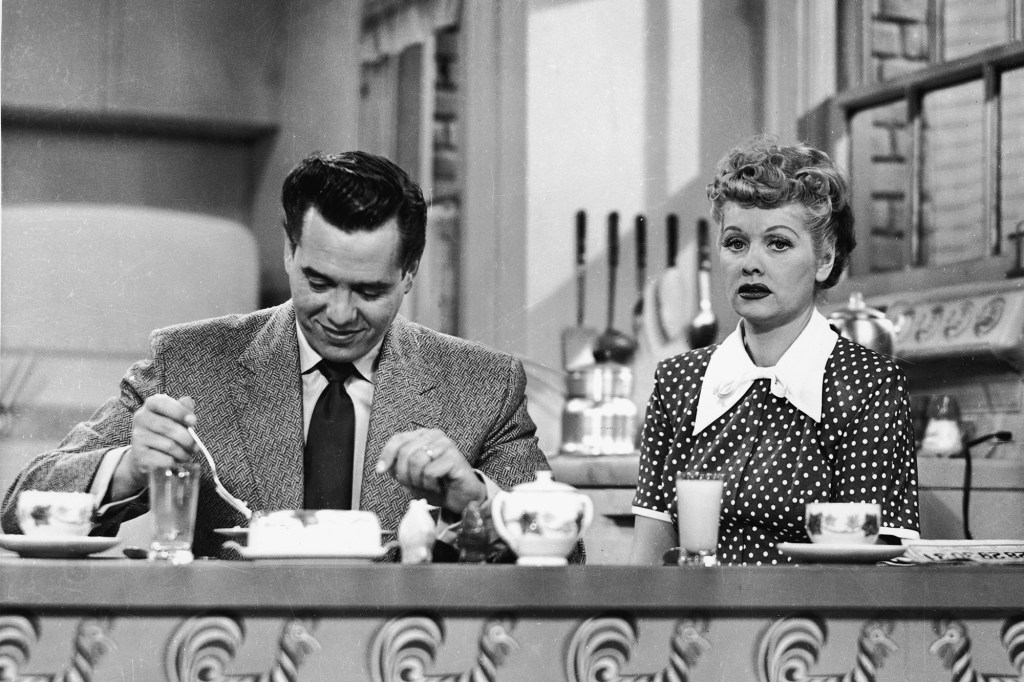 The couple’s hit sitcom, “I Love Lucy,” which ran from 1951 to 1957, was the only thing holding the marriage together: “By the end of the show, the marriage was in total shambles,” said author Darin Strauss.Getty Images

Behind the scenes, though, Arnaz bristled at playing second fiddle. People would call him Mr. Ball — and it was a big blow to his ego. “He resented it, but [the show] was his goldmine. She was bringing in the gold,” said Porter.

Another scandal would soon rock their marriage. In January 1955, gossip rag Confidential ran a story about Arnaz’s liaisons with “cuddle-for-cash babes” at his Beverly Hills Hotel bungalow. Ball, ever the statesman, deftly deflected the outsize media attention with humor by “flippantly denying it,” said Strauss. “But it was painful, because it was true.”

Indeed, the show was the only thing keeping them together. “By the end of the show, the marriage was in total shambles,” said Strauss.

“The last kiss they ever had was the last kiss of the last episode of their last show,” said Strauss. Ball bought out Arnaz’s share of the company and went on to be a powerful studio exec, ushering in hits such as “Star Trek” and “Mission: Impossible.” 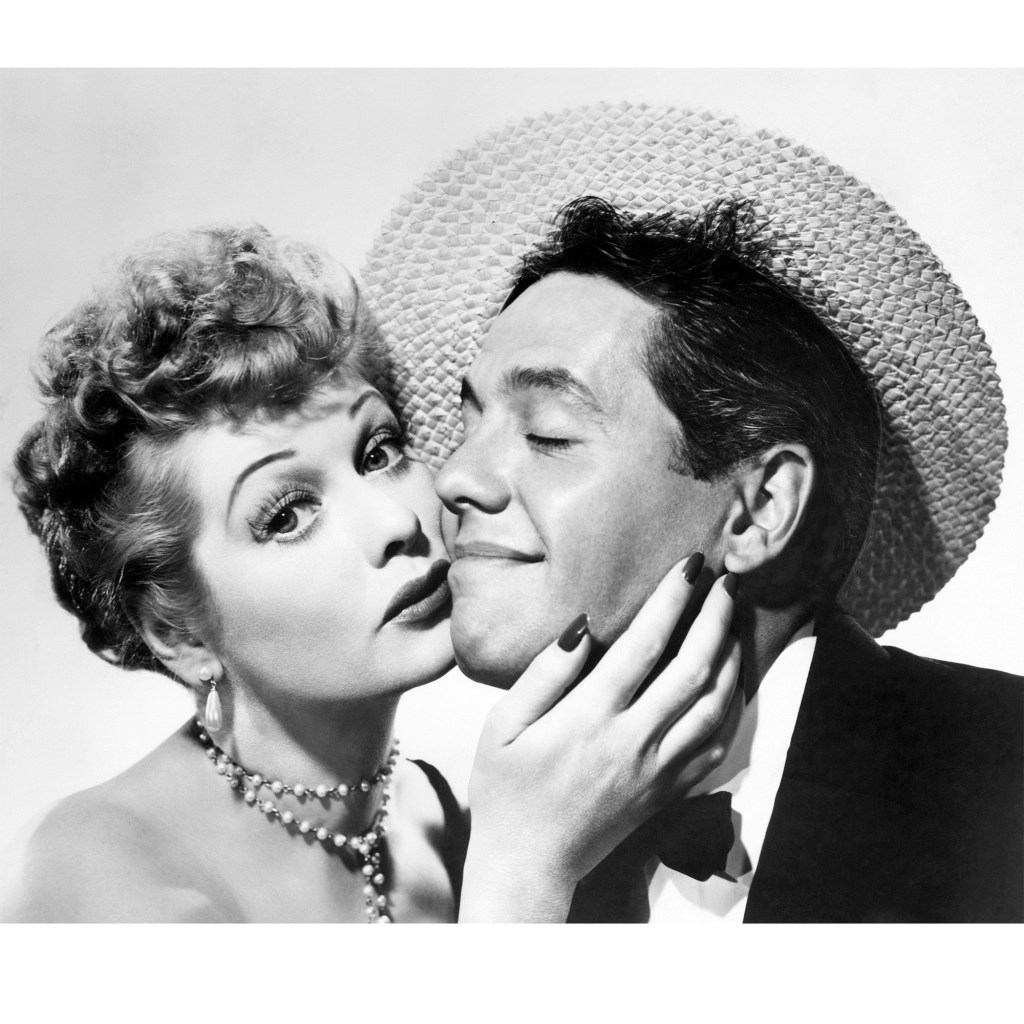 After two kids and two decades of marriage, Ball and Arnaz divorced, but she said he was the love of her life.Courtesy Everett Collection

The couple divorced in May 1960. Ball would marry comedian Gary Morton the following year, while Arnaz wed Edith Mack Hirsch in 1963.

Still, the last phone call Arnaz accepted on his deathbed, in 1986, was from Ball.

“Even when she got remarried,” said Strauss, “[Ball] said [Arnaz] was the love of her life — not the kind of thing your second husband wants to hear.”