A man whose wife allegedly killed their three young daughters last week in their New Zealand home said Thursday that he’d already forgiven his wife and called on others to do the same, the Associated Press reported. Graham Dickason, an orthopedic surgeon, wrote the message in a letter that a reverend read aloud to hundreds of people attending a candlelight vigil outside the family’s home in the South Island town of Timaru.

In the letter, the father lamented the loss of his children and said he would carry it with him for the rest of his life. While urging others to forgive his wife, Lauren Dickason, he said that she was also a victim in what had happened, the AP reported.

Lauren Dickason, 40, was charged with murder for the alleged killings of her 6-year-old daughter Liane and twin 2-year-old daughters Maya and Karla. Before her next court appearance, scheduled to take place October 5, she is being held at a psychiatric facility.

For more reporting from the Associated Press, see below:

People in the town of Timaru held an evening vigil outside the home of three young girls September 23 who were killed last week in a crime that shocked New Zealand. Mandy Sibanyoni, nanny of the three daughters of Graham and Lauren Dickason, holds photographs of the Dickason family in her home in Pretoria, South Africa on September 17.
Sebabatso Mosamo/AP Photo

The Dickason family moved into housing for medical professionals near the Timaru Hospital in New Zealand less than a week before the killings. Before that, as new arrivals from South Africa, they were required to spend two weeks in a coronavirus quarantine hotel run by the military.

Graham Dickason returned home just before 10 p.m. last Thursday and found the bodies of his daughters, according to reports. Emergency services said that when they responded, they found Lauren Dickason, who was hospitalized in stable condition and later charged by police.

Neighbors called police when they heard a man screaming and crying.

A judge has suppressed the details of the alleged crime.

At the vigil, Graham Dickason said in his letter that parents of young children should remember to let them play wildly and to laugh.

The family had just moved to New Zealand from South Africa, where former neighbors and others who knew them laid wreaths and flowers later Thursday outside the estate where they used to live. Colorful wreaths lay next to a white cross at the housing estate’s entrance in the South African capital, Pretoria.

Christine Wright, who said she had been a patient of Graham Dickason’s, was one of those to bring flowers. She said she and her husband had seen news of the killings in South Africa, where it has gained media attention.

“We couldn’t believe it at first. I mean, it was just such a shock to us,” she said. “We had to read it twice to actually realize that it was our doctor.”

Wright’s husband, Allan, said Dickason’s wife had assisted in some surgeries “and she seemed like a very nice person.”

Nothing on Lauren Dickason’s social media pages over recent months when she was living in Pretoria indicated anything was amiss.

She posted pictures of her family and of bakery treats, and wrote about the virus, urging people to get vaccinated. In May, she marked the couple’s wedding anniversary on Facebook.

“Happy 15th wedding anniversary Graham Dickason. What an adventure. We have truly created a beautiful family and had many good times together,” she wrote. “May the next years be more blessed, more happy and may the kids let us sleep.”

Her Facebook page said she went to high school in Pretoria and studied medicine in Cape Town.

Mandy Sibanyoni, who worked as a childminder for the Dickasons in South Africa, described them as an “awesome family” with “wonderful kids” and no obvious problems.

She said the only sign of stress she saw from Lauren Dickason was as a result of one of her daughters being born with a lip disfigurement, which needed surgical interventions. But both parents “loved their kids like nobody’s business,” she said.

“I’m torn apart, a part of mine is gone,” Sibanyoni said in an interview with the Associated Press last week. “And it’s like those kids, they are my kids too because I raised them.”

“I don’t know what to do about this because the only question that I’ve got now is, what happened? What went wrong? Because Lauren cared for her kids.” 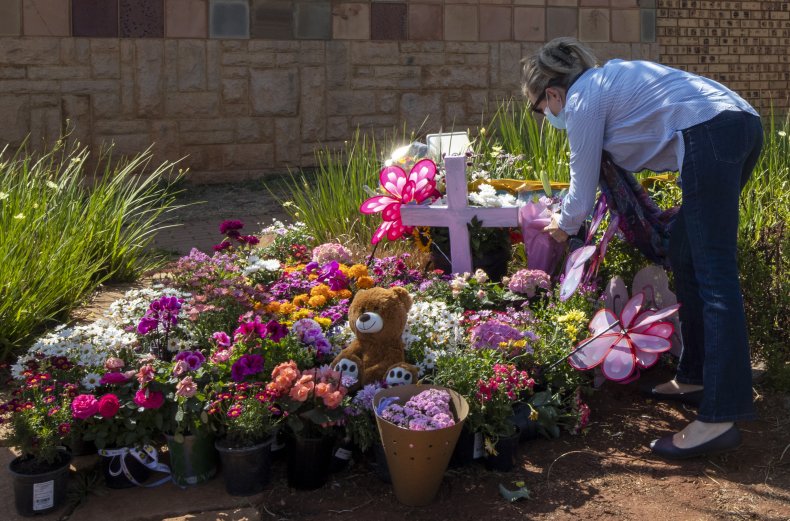 Graham Dickason, a father whose wife allegedly killed their three daughters last week, said Thursday that he had forgiven his wife and asked others to do the same. Christine Wright leaves flowers outside the complex where the Dickason family lived prior to their emigration to New Zealand, in Pretoria, South Africa, September 23.
Themba Hadebe/AP Photo

Córdoba: ‘The city of flowers’ is back in bloom after COVID break