The Duchess of Sussex gifted her sister-in-law a gold bracelet after the royal wedding to Prince Harry as “an elegant peace offering”, it has been claimed.

Meghan presented the bracelet to the Duchess of Cambridge after an alleged incident during a bridesmaid dress fitting, which ended in tears.

Biographer Andrew Morton writes about the gift an updated version of his book, Meghan: A Hollywood Princess.

The Duchess of Cambridge and Princess Charlotte at the royal wedding in 2018. (Getty)

“The spat concerning the bridesmaids’ outfits now behind them, Meghan had since given Kate and her six closest friends gold bracelets designed by Californian jeweller Lisette Polny as a thank-you for their help and support,” Morton writes.

“It was an elegant peace offering, both women professional enough to know that there was no gain in showing dissent or disdain.”

In March last year, Meghan told Oprah Winfrey it was Kate who had made her cry in the lead up to the royal wedding in 2018, and not the other way around. 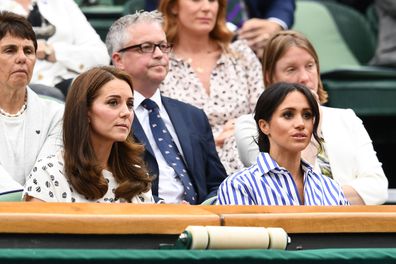 Kate’s daughter Princess Charlotte was one of the young attendants getting fitted.

The Duchess of Sussex claimed Kensington Palace refused to clear up a story involving her and Kate, calling it “the beginning of a real character assassination”.

“The narrative with Kate, which didn’t happen, that’s when everything changed,” the Duchess of Sussex told Oprah.

“She was upset about something, she apologised, she owned it. 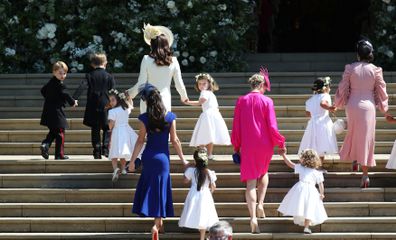 It has been claimed Meghan gifted the Kate a gold bracelet as a ‘peace offering’ after the royal wedding. (Getty)

“She was upset about something, about the flower girl dresses and it made me cry and it really hurt my feelings.”

Morton claims that despite Kate and Meghan sharing very similar and unique jobs, they had little time to bond and become close “away from public events”.

“It was a practical matter as much as anything,” he writes. 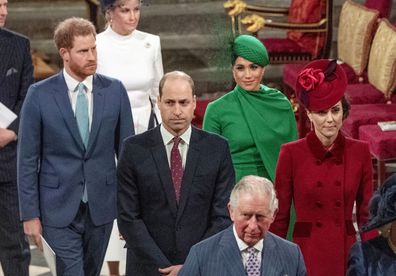 The royals at the 2020 Commonwealth Day service at Westminster Abbey. (Getty)

“Kate spent weekends and holidays at Anmer Hall, the Cambridges’ country home in Norfolk, while Meghan and Harry were approximately three hours’ drive away, living in a large, remote, rented property on the Great Tew estate in Oxfordshire.”

The two women last attended a public event together in March, 2020, at the Commonwealth Day service at Westminster Abbey.

The Duchess of Sussex quickly returned to Canada, where she and Prince Harry had been staying at the time.

The Duke of Sussex has returned to England since, without his wife.

From Diana and Fergie to Mary and Marie: royal sisters-in-law