Meghan Markle opened up about her dream wedding aged 14 at the Bel Air hotel, years before she married Trevor Engelson and Prince Harry.

The Duchess of Sussex has been married twice – first to her ex-husband Trevor Engelson from 2011 to 2013, and now she is happily married to Prince Harry – but her dream wedding as a teenager was nothing like her real-life big days.

MORE: Meghan Markle’s rarely-seen engagement ring from ex-husband is not unlike Prince Harry’s

During her latest Archetypes podcast, Meghan opened up about the stigma around being unmarried, single or “spinsters” with Mindy Kaling. She began by revealing one of her religious assignments at school was to plan her wedding. “When I was 14, I planned my wedding. Not my actual wedding, that would have been a bit harder to imagine,” she said.

WATCH: Meghan Markle Is Reunited With Her Wedding Dress

“I remember everything little thing about it. I wanted it to be at the Bel Air hotel, there was a Swan Lake, I wanted the cake to be from Hansen’s bakery, and oh my goodness, the dress, strapless and pouffy and I’d seen it in a bridal magazine.”

RELATED: Prince Charles’ second royal wedding ‘was a hell of a party’ – insider

Looking back, she said she doesn’t understand why the assignment ever existed. “At no point can you say ‘Nope. My dream for the future is to be single,'” she said. “The message even at my feminist all-girls school was as traditional as it gets. First comes love. Then comes marriage.” 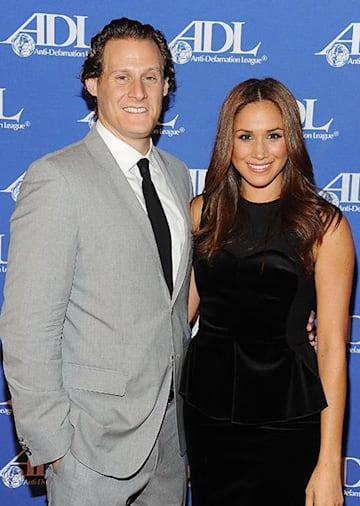 Duchess Meghan went on to say she had romanticised relationships, and after her parents Doria Ragland and Thomas Markle split when she was two, she “always wanted this cookie-cutter looking, perfect life.”

The former Suits actress wore a strapless white dress with a silver jewelled belt – much like the Duchess of Cambridge’s second wedding dress – for her beachfront ceremony at the luxurious Jamaica Inn resort in Ocho Rios. While this gown did live out Meghan’s dream of having a strapless neckline, it was by no means the “pouffy” one she had described. 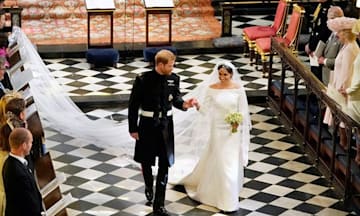 Meghan and Trevor’s marriage was dissolved in a no-fault divorce in 2013, and she went on to meet Prince Harry in 2016. The pair got married in 2018 at St George’s Chapel at Windsor Castle, and Meghan looked stunning in two sleek gowns – the first was a long-sleeved Givenchy dress, followed by a halterneck Stella McCartney dress for her evening reception.

“When I started dating my husband, we became engaged. Everyone was just like, ‘Oh my god, you’re so lucky, he chose you’. At a certain point, after you hear it a million times over, you’re like, ‘Well, I chose him too,'” she said of the Duke in her podcast, before praising her husband for standing up for her.

“But, thankfully, I have a partner who was countering that narrative for me and going, ‘They’ve got it all wrong. I’m the lucky one because you chose me.’ “But it is gendered and it’s archetyped and stereotyped that you’re so lucky, and it just feeds into this idea that you’re waiting for someone to tell you that you’re good enough, as opposed to knowing that you’re good enough on your own.”