The mayor of a small Mexican town married an alligator in an unusual ritual that is thought to date back centuries.

The symbolic ceremony took place in San Pedro Huamelula, a town located in the southwestern state of Oaxaca on Mexico’s Pacific Coast.

On Thursday, the mayor of the town, Victor Hugo Sosa, who is of indigenous descent, wed a seven-year-old alligator that was clothed in a white wedding dress and other colorful attire with many local residents in attendance, Reuters reported.

In a colorful ceremony, Sosa and other attendees danced to traditional music as the mayor held the reptile in his arms.

The mayor of a small Mexican town has married an alligator in a traditional ceremony. The alligator involved in the ritual is believed to be a deity representing Mother Earth.
Ayuntamiento De San Pedro Huamelula

At points in the ceremony, the crowd urged the mayor to kiss his bride, which he did so on several occasions, planting his lips on the top of its snout. Fortunately, for the mayor, the animal’s jaws had been tied shut.

Revellers also carried the alligator through the town’s streets as musicians serenaded the party.

The state of Oaxaca in southern Mexico is rich in indigenous culture and is home to more than a dozen groups who are descended from people who were living in the region prior to Spanish colonization. These groups have kept their own languages and traditions alive to this day.

According to the Mexican National Institute of Statistics and Geography, Oaxaca has the highest percentage of indigenous people in the county as of 2020—reaching almost 70 percent of the population. 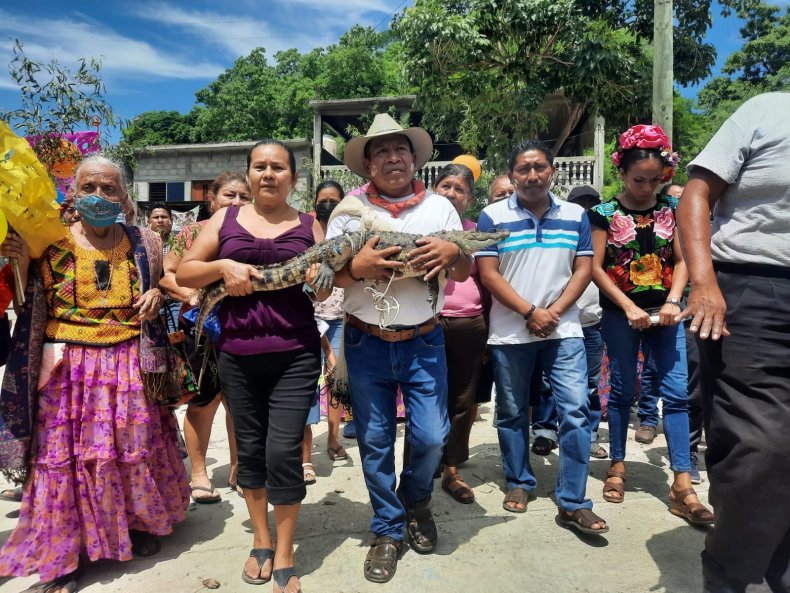 The alligator marriage ritual, which takes place in San Pedro Huamelula every year, is thought to date back to pre-Hispanic times originating with the state’s Chontal and Huave indigenous communities. The ceremony blends indigenous traditions with elements of Catholicism.

The alligator is considered to be a deity that represents Mother Earth, while the marriage itself is believed to bring abundance to the town, which relies heavily on agriculture and fishing.

“We ask nature for enough rain, for enough food, that we have fish in the river,” Sosa said during the ceremony.

The organizer of the wedding, Elia Edith Aguilar, was entrusted with the responsibility of conducting the ceremony.

“It gives me so much happiness and makes me proud of my roots,” she told Reuters. “It’s a very beautiful tradition.”

The ceremony in Mexico is not the only example of a ritual involving a human marrying an animal.

In 2014, an 18-year-old girl from a remote village in eastern India took part in a ceremony in which she was married to a stray dog, the Daily Mail reported.

The marriage was organized by village elders because a local guru had told the family that the teen was cursed with bad luck and that the only way to lift the spell was to marry the dog. After the symbolic ceremony, the girl was free to marry a man without divorcing the dog. Several other ceremonies like this have taken place in the village and surrounding areas, according to the girl.