A man who looked remarkably like Captain Jack Sparrow from the “Pirates of the Caribbean” movies waited patiently.

Grant Stuard finally arrived on a pirate ship Monday night, pulling into the dock next to the Cannery Restaurant in Newport Beach.

“Captain Jack” greeted Stuard, perhaps the only man at the Irrelevant All-Star Lowsman Banquet with hair as unique as his. He presented a bouquet of flowers to Stuard’s wife, Josie.

“You look the part,” the pirate would later say to Stuard. “If this football thing doesn’t come through, talk to me.”

Stuard, a linebacker from the University of Houston, was the man of honor at the Lowsman Banquet. The night of roasting and celebrating concluded the 46th annual Irrelevant Week, which celebrates the final pick in the NFL Draft each year.

Stuard was presented the Lowsman Trophy, the fun counterpart to the Heisman Trophy. It features a football player fumbling a ball. 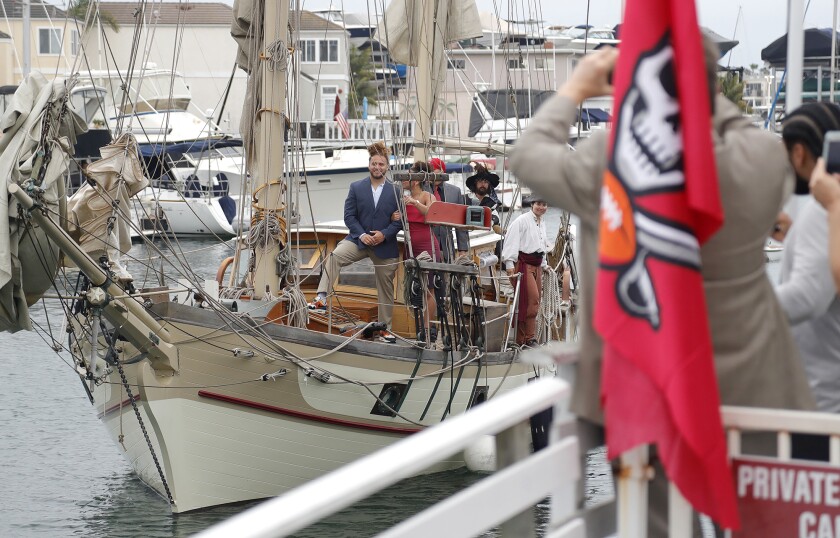 Mr. Irrelevant Grant Stuard arrives with his wife Josie via pirate ship for the annual Lowsman Banquet at the Cannery restaurant in Newport Beach on Monday.

He enjoyed several activities during his time in the Southland, which started Friday. They included an NFL Network interview at SoFi Stadium, surfing lessons, a pub crawl, a cruise around Newport Harbor, a session at GritCycle and Sunday service at Mariner’s Church.

“I was a little nervous about surfing, and it turned out to be a blast,” Stuard said. “It’s definitely going to be something that I’m going to do in Tampa, and moving forward.”

Stuard said he also enjoyed the message at the church service. If he makes it with the Buccaneers, he will definitely be someone to root for, as he enjoys helping others and wants to be a role model for his younger siblings.

Paul Salata would be glad to hear that. Under the premise of doing something nice for someone for no reason, Irrelevant Week was created by Salata, a former USC wide receiver who also played in the NFL.

Salata, now 94, was not present at Monday’s ceremony, but his daughter Melanie Salata-Fitch has been running the show for a while now.

Salata-Fitch and event emcee John Ireland are both Corona del Mar High School alumni. Ireland is currently the radio voice of the Los Angeles Lakers, but he had time to help his old friend after the Lakers were proven irrelevant in the NBA Playoffs. They lost in the first round.

Ireland said his first job as emcee was to give Salata-Fitch, who he said he once dated in high school, a hard time. But his other job was to celebrate Stuard, who he called probably the best Mr. Irrelevant player ever. 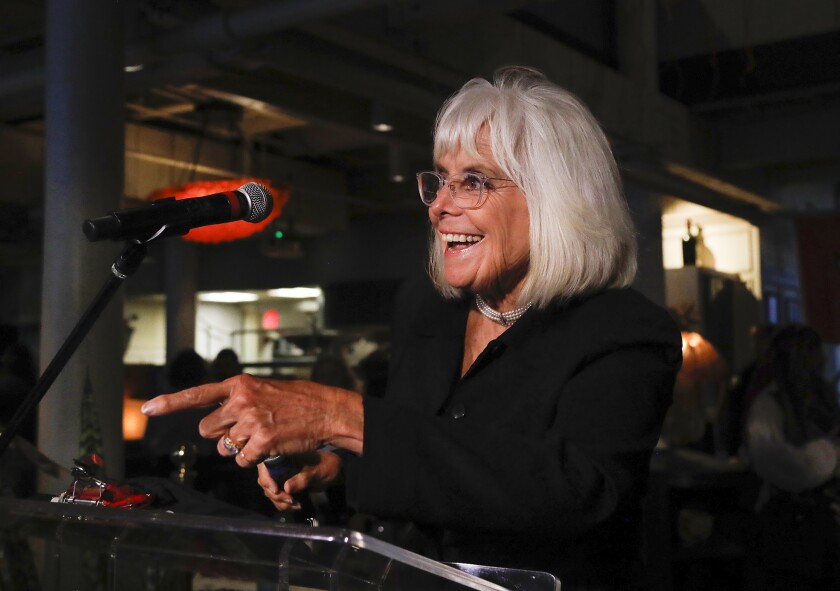 Melanie Salata-Fitch, whose father Paul founded Irrelevant Week, begins the festivities for the annual Lowsman Banquet for 2021 Mr. Irrelevant Grant Stuard at The Cannery restaurant in Newport Beach on Monday.

Stuard, a Texas native, played four years at the University of Houston. He was a first-team All-American Athletic Conference performer in his senior year, when he changed his number from 3 to 0. Perhaps that was in anticipation of becoming Mr. Irrelevant.

Stuard also was drafted by the same team that currently has the most relevant Mr. Irrelevant ever. Kicker Ryan Succop was the last pick in the 2009 NFL Draft and has been able carve out a career in the league. A video message from Succop was played on Monday night.

He was also presented a big fireworks box by Newport Beach Fire Chief Jeff Boyles. The fact that it was an empty box was irrelevant.

“Since fireworks are illegal in Newport, we had to take them out, but we’ll go ahead and give you the box,” Boyles said.

Police Chief Jon Lewis gave Stuard a business card with his phone number, and Mayor Brad Avery presented him with the key to the city.

Stuard left Orange County on Tuesday morning, Salata-Fitch said. He was headed back to Texas for a public wedding ceremony with Josie, whom he married last December. They plan to take their honeymoon before training camp starts on July 25.

The Lowsman Banquet also raised money for charity, with R.M. Piles Boys Camp as the primary benefactor this year. ` 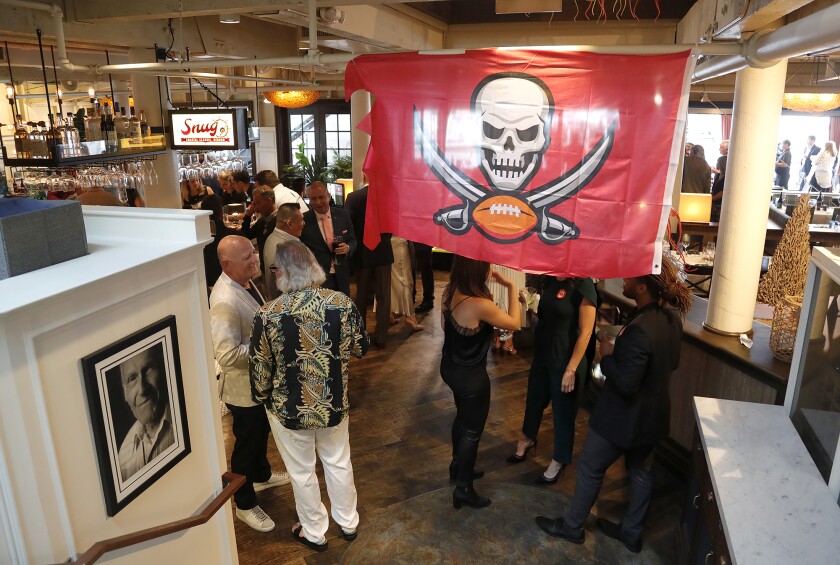 Support our sports coverage by becoming a digital subscriber.