MUNDY TWP. — Raegen Genovesi was planning to surprise her husband by wearing her original wedding veil when the couple renewed their vows on their 20th anniversary in October.

However, when she unsealed the box that has held her gown and headpiece for all these years, she was the one who got a surprise – a very unwelcome surprise.

“At first, I thought they had cut my train,” Genovesi said. “Then, I saw the sleeves were short and poufy, and I thought they cut my sleeves. Then I saw that it was a size I have never worn, and I realized, this is not my dress.”

It wasn’t until 2003 when Genovesi left the dress in the hands of Pro-Clean cleaners in Grand Blanc to have it professionally cleaned and sealed in a box with a window.

She has looked through that window many times, admiring the beads and sequins on the bodice that showed through, and looked very much like the same as those on her gown.

“It never, ever crossed my mind for one second that it wasn’t my dress,” she said. 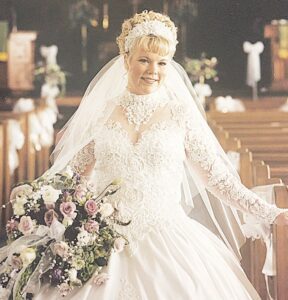 Raegen Genovesi had her wedding gown professionally cleaned and sealed in 2003, but when she opened the box last month, she was stunned. Courtesy photos

As if the 18-plus years that have passed didn’t complicate the problem enough, Genovesi checked the receipt, dated Feb. 3, 2003, and discovered that Pro-Clean had sent the dress to Prestige. She has tried to contact Prestige but, so far, has gotten only voicemail. And she’s concerned because Prestige is a national company, so her dress could have ended up far, far away.

“For years and years, I’ve looked at that box,” Genovesi said. “I’ve gotten it out of the closet and looked through the window. Lots of times, I thought I’d never be able to open it. It has crossed my mind to make something for my daughter out of it or donate it.”

Once the disbelief wore off, despair set in.

“I lost my grandfather in March,” Genovesi said. “He had walked me down the aisle. All these memories came back. I felt betrayed, and extreme, extreme sorrow. I kind of feel like I was cheated. I think about the what ifs: what if my daughter was going to wear it and now, she never could. 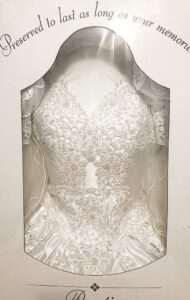 The dress as it appeared in the sealed box for 18 years. Courtesy photo

“I called my maid of honor, my cousin, and I was crying so much on the phone, I had to tell her it’s not an emergency, everyone is OK. In about five minutes or so, she kind of start laughing, so I start laughing, too. I don’t know what else to do because I can’t believe it happened.”

Genovesi also feels sad for the person who may or may not have her dress. She is hoping that getting the word out will prompt women to check to see if they, too, have the wrong dress.

“The more I reflect on it, it is a funny story,” she said. “I’m glad I have that funny story to tell. And there’s still the hope that someone will look in their closet and study their dress and (realize it’s not theirs). There’s always a glimmer of hope. But if nothing happens out of it, we have a good story.”

If anyone finds that they, too, have the wrong dress and they think it may belong to Genovesi, they may contact her via email at Raegengenovesi@gmail.com.