A grandmother is being blasted on social media for allegedly attempting to sell off her “petite” wedding dress because her granddaughters will be “too big” to wear it.

The narcissistic nana posted an acerbic advertisement for the gown on Facebook Marketplace, which was subsequently screenshotted and shared to Twitter by writer Emily Murnane, who lambasted mockingly, “Please buy my wedding dress, my granddaughters are huge.”

The tweet quickly went viral on Thursday, racking up more than 75,000 likes.

“Beautiful wedding dress, size 2, petite,” the woman is accused of writing below her listing in a buying-and-selling group. “Has been professionally packaged to keep in new condition.”

The David’s Bridal dress was carefully preserved in the 1990s to be an heirloom for future generations — only to be hocked to a stranger on Facebook.@emily_murnane

The ad was accompanied by photos showing the slender seller wearing the David’s Bridal dress on her wedding day back in 1994.

When asked why she wouldn’t keep the dress for her relatives to wear, the woman is said to have replied: “If I had daughters I would, but even my daughter-in-laws were to (sic) big.”

She further complained: “Even my granddaughters will be bigger and not fit the dress. I always hoped that one of them would have been able to, that’s why I’ve kept it all these years. “ 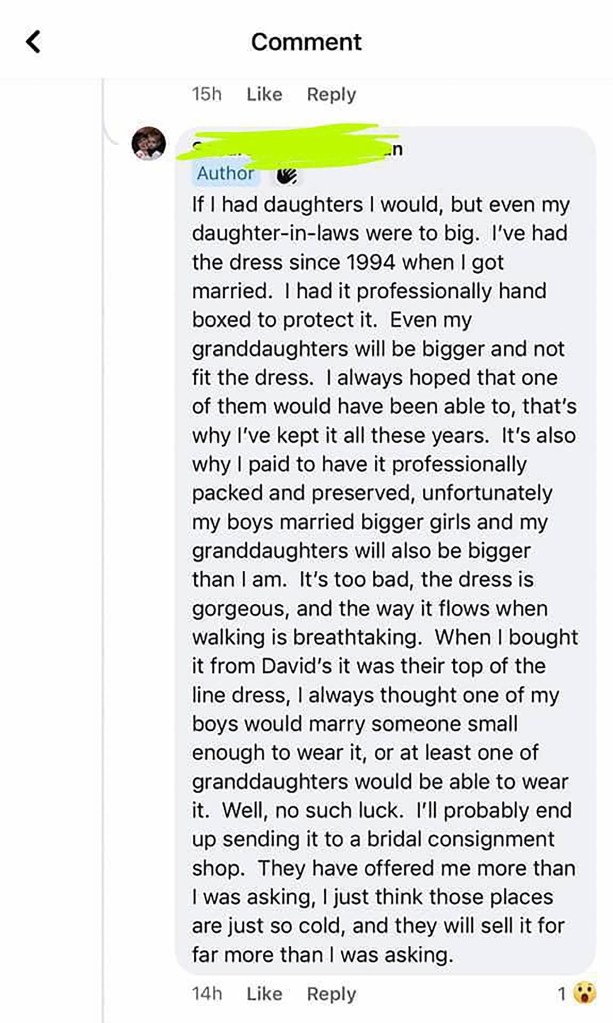 Readers were shocked by the grandmother’s harsh tone: “Anyway, so weird how everyone born in the late 80s/early 90s ended up with an eating disorder!!!”@emily_murnane

The grandmother continued with her diatribe, claiming that her sons had “unfortunately married bigger girls and my granddaughters will also be bigger than I am.”

On Twitter, Murnane’s followers expressed their horror at the body-shaming nana.

“How much do we want to bet the ‘bigger girls’ her sons married aren’t actually that big. I feel so sorry for everyone who has ever had to interact with this woman,” one wrote.

Another attempted to do the math on how old the woman’s granddaughters were, elaborating: “OK, so if she married in 1994 and had her first kid a year later and that kid had their first kid at age 20, those irredeemably fat granddaughters that will never fit into her dress are no more than SEVEN YEARS OLD.”

Murnane herself said the woman’s seemingly fat-phobic listing explained “how everyone born in the late 80s/early 90s ended up with an eating disorder.”