Third times the charm! After two successful My Big Fat Greek Wedding films, Nia Vardalos has been hard at work on a third follow-up to honor the fan-favorite characters and the legacy of the late Michael Constantine, who died earlier this year.

The actress, 59, shared an Instagram snap of a recent reunion with several of her costars before noting her excitement to reunite onscreen again.

“Friends in real life are why our films are so much fun to make,” Vardalos captioned a photo with Gia Carides, Louis Mandylor and Lainie Kazan on Friday, October 1. “Cousin Nikki @gia.carides & brother Nick @louismandylorofficial & mom, @lainie_kazan gathered to honor the memory of Michael Constantine, may he rest in peace.”

The actress, who also penned the two My Big Fat Greek Wedding films, added, “We miss you Michael, thank you for bringing my words to life with such passion and accuracy, you will always be with us. ❤️”

While the former movie relatives memorialized the My Big Fat Greek Wedding patriarch, Vardalos opened about how her script for a third film in the franchise would honor his memory.

“He had told me he wouldn’t be able to join us for the third film and his wish was that we go on,” the Canada native continued in her post. “I wrote the screenplay to reflect Michael’s decision and will always treasure his last messages to me, hoping we were filming soon. The various variants have made indies difficult, but we are hopeful.”

The My Life in Ruins star teased her followers about additional pitches, writing, “Please do not tell me your ideas, the script is finished. ✏️ (And no Toula and Ian are not grandparents!).”

Constantine died on August 31 after battling an undisclosed illness for years. He was 94. At the time, the I Hate Valentine’s Day actress shared a heartfelt tribute to her onscreen father. 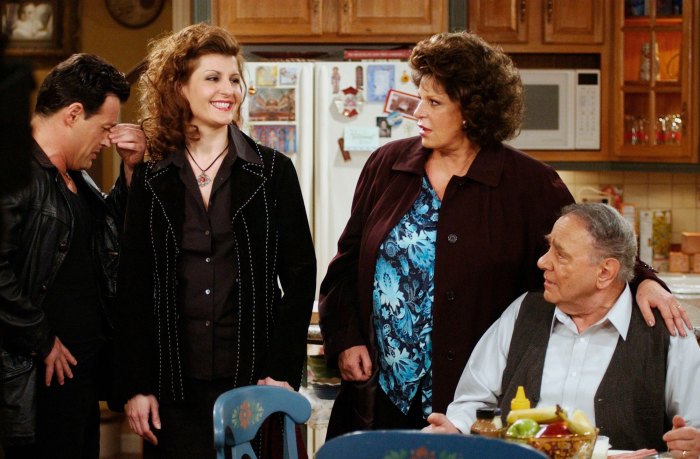 “Michael Constantine, the dad to our cast-family, a gift to the written word, and always a friend,” the Great American Baking Show host tweeted on September 8. “Acting with him came with a rush of love and fun. I will treasure this man who brought Gus to life. He gave us so much laughter and deserves a rest now. We love you Michael.”

More than 10 years after the 2002 release of the romantic comedy, Vardalos announced the production of the sequel in May 2014.

“Now that I’m experiencing motherhood, I’m ready to write the next chapter of my family story,” she said in a statement at the time. “Of course, a few jaded folks in the press corps will claim I ran out of money or just want to kiss John Corbett again. One of these things is true.”

“I think [Nia] did a great job with really putting herself in there and kind of mixing things up and sitting back and taking 15 years to write the script,” costar Joey Fatone previously told Us Weekly in November 2015 of the sequel film. “I think it all paid off. I think it’s going to be really good.”

Listen to Us Weekly’s Hot Hollywood as each week the editors of Us break down the hottest entertainment news stories!