Brooklyn Beckham and Nicola Peltz have been happily married for five months, but following their $3.5million nuptials, a lot has been said about the big day.

Last month, the couple spoke out about a rumoured fallout between Nicola and Brooklyn’s designer mum, Victoria Beckham, sparked in part by the fact that the actress didn’t wear a gown designed by her mother-in-law.

Speaking to Variety, the newlyweds insisted that there was no rift and that while she initially intended to wear a dress designed by Victoria, she was later told her atelier couldn’t make it in time.

This week, the 27-year-old gave a new interview and confessed that reading reports that she never intended to wear a Victoria design really “hurt my feelings”.

Nicola has spoken to Grazia USA

“I was truly so excited to be able to wear a design that my future mother-in-law created. I thought that was so beautiful and such a beautiful story,” she added.

Nicola went on to explain that she began designing her dream gown with the help of her best friend and stylist Leslie Fremar and her mother Claudia, but later Victoria called Claudia and let her know that her atelier could not do it. 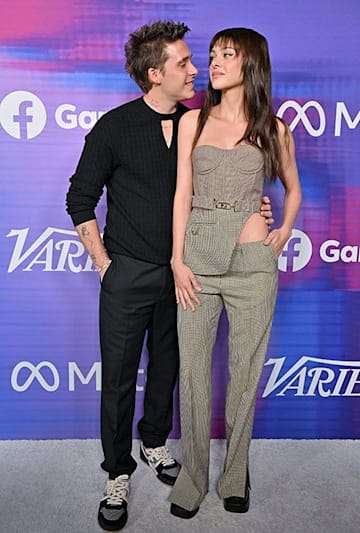 The couple have been married for 5 months

“When I read things that say [things like] I was never planning on wearing a [Victoria Beckham] dress or things like that, it does hurt my feelings,” she told the publication.

For her big day, Nicola chose a gown created by Valentino’s Pierpaolo Piccioli which featured a square neckline, a fitted waist and a billowing train which was layered underneath her embroidered veil. She paired it with elegant lace gloves and chunky square-toe shoes.